Document:How to profit from an engineered economic decline and crisis 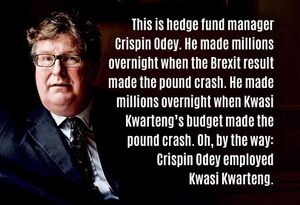 ★ Start a Discussion about this document
How do you profit from an engineered economic decline and crisis?

Engineered dystopia is profiteering from the suffering of others. The only trickle-down effect that exists is lies and exploitation.

In times of engineered dystopia, one only has to observe in the news and media what this most blatantly corrupt government is using to keep the masses distracted. Be wary of the news and media being repeatedly focused on not newsworthy deflections and distractions.

It is possible and suspected that key political figures have been in cahoots with multi million and billionaire hedge funders, who are the second employers of those bought and bribed politicians to deliberately screw-up the economy so the hedge funders can make major profits.

The wrecking of the economy would appear to be deliberate and engineered to destroy jobs, businesses and the security of people's livelihoods and well-being – almost to the point that people will own nothing, including their homes – all purchased cheap by the hedge funders and property financial sharks.

Crispin Odey is an in-side political player and a major profiteering hedge funder, who helped fund and bankroll Jacob Rees-Mogg's hedge funding investment firm Somerset Capital Management. Crispin Odey was once married to Rupert Murdoch's daughter. Rupert Murdoch was a very close friend of Jacob Rees-Mogg's dad, William Rees-Mogg, who wrote a book ("The Sovereign Individual"} on how to profit from economic decline.

Crispin Odey also made £220 million from backing Brexit, which he denied. Crispin Odey also helped fund Boris Johnson's leadership campaign. The plot thickens, as the latest Chancellor Kwasi Kwarteng was once employed by Crispin Odey, who has crashed the pound since his newly appointed role.[1]

Further revelations reveal that Liz Truss held a private dinner meeting for hedge funding managers before her spending plan was announced. Another engineered scam by this most blatantly corrupt government – deliberately shorting the pound.[2]

The question that needs to be asked is: Did the government forewarn and inform hedge funders so they could cash in?

How do you profit from an engineered economic decline and crisis? Simple really – acquire and give inside information to the hedge funders, who fund your leadership campaign!

Liz Truss and Kwasi Kwarteng have not only destroyed the economic infrastructure of the nation - they have also destroyed the very reputation of the Conservative Party.

This has brought into question the doubt and true nature of politics itself – how it operates and functions and who it actually represents and serves.

Liz Truss and Kwasi Kwarteng have both ultimately exposed how dystopian and systemic the whole corrupted political system is rotten to its core – when the likes of Crispin Odey, an inside political player and hedge funder can make multiple millions by funding and acquiring first-hand information from the Conservative Party, even before its business plan was considered or announced.[3]