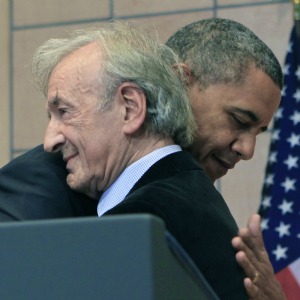 Dr. Robert Faurisson. Pictured following a nearly fatal attack on September 16, 1989 by three thugs from a group calling itself, "The Sons of the Memory of the Jews"

Since this article was written Elie Wiesel has seen his status elevated through Nobel Laureate to the Jewish equivalent of living sainthood. During the same period, many of those who have publicly expressed doubts backed by evidence, similar to that set out here, have been imprisoned, had their homes and business premises fire-bombed, their academic/political careers terminated and/or (as in the case of this author) been beaten nearly to death for their temerity [1]. Such is the status of 'Freedom' in the western world today.

On 5 November 2012 the 'Jewish Daily Forward reported Elie as saying that he and President Obama are co-authoring a book - How nice. [2].

★ Start a Discussion about this document
Elie Wiesel: A Prominent False Witness

These last years have seen, in the name of so-called "historical revisionism," the elaboration of theses, especially in France, questioning the existence of the Nazi gas chambers and, perhaps beyond that, of the genocide of the Jews itself.

But in what respect is Elie Wiesel a witness to the alleged gas chambers? By what right does he ask us to believe in that means of extermination? In an autobiographical book that supposedly describes his experiences at Auschwitz and Buchenwald, he nowhere mentions the gas chambers. [2] He does indeed say that the Germans executed Jews, but ... by fire; by throwing them alive into flaming ditches, before the very eyes of the deportees! No less than that!

Here Wiesel the false witness had some bad luck. Forced to choose from among several Allied war propaganda lies, he chose to defend the fire lie instead of the boiling water, gassing, or electrocution lies. In 1956, when he published his testimony in Yiddish, the fire lie was still alive in certain circles. This lie is the origin of the term Holocaust. Today there is no longer a single historian who believes that Jews were burned alive. The myths of the boiling water and of electrocution have also disappeared. Only the gas remains.

The fire lie is of undetermined origin. It is in a sense as old as war propaganda or hate propaganda. In his memoir, Night, which is a version of his earlier Yiddish testimony, Wiesel reports that at Auschwitz there was one flaming ditch for the adults and another one for babies. He writes: [6]

Not far from us, flames were leaping from a ditch, gigantic flames. They were burning something. A lorry drew up at the pit and delivered its load — little children. Babies! Yes, I saw it — saw it with my own eyes ... Those children in the flames. (Is it surprising that I could not sleep after that? Sleep has fled from my eyes.)

A little farther on there was another ditch with gigantic flames where the victims suffered "slow agony in the flames." Wiesel's column was led by the Germans to within "three steps" of the ditch, then to "two steps." "Two steps from the pit we were ordered to turn to the left and made to go into a barracks."

Later, I learn from a witness that, for month after month, the ground never stopped trembling; and that, from time to time, geysers of blood spurted from it.

These words did not slip from their author in a moment of frenzy: first, he wrote them, then some unspecified number of times (but at least once) he had to reread them in the proofs; finally, his words were translated into various languages, as is everything this author writes.

That Wiesel personally survived, was, of course, the result of a miracle. He says that: [8]

In Buchenwald they sent 10,000 persons to their deaths each day. I was always in the last hundred near the gate. They stopped. Why?

In 1954 French scholar Germaine Tillion analyzed the "gratuitous lie" with regard to the German concentration camps. She wrote: [9]

Those persons [who gratuitously lie] are, to tell the truth, much more numerous than people generally suppose, and a subject like that of the concentration camp world — well designed, alas, to stimulate sado-masochistic imaginings — offered them an exceptional field of action. We have known numerous mentally damaged persons, half swindlers and half fools, who exploited an imaginary deportation; we have known others of them — authentic deportees — whose sick minds strove to go even beyond the monstrosities that they had seen or that people said had happened to them. There have been publishers to print some of their imaginings, and more or less official compilations to use them, but publishers and compilers are absolutely inexcusable, since the most elementary inquiry would have been enough to reveal the imposture.

Tillion lacked the courage to give examples and names. But that is usually the case. People agree that there are false gas chambers that tourists and pilgrims are encouraged to visit, but they do not tell us where. They agree that there are false "eyewitnesses," but in general they name only Martin Gray, the well-known swindler, at whose request Max Gallo, with full knowledge of what he was doing, fabricated the bestseller For Those I Loved.

Jean-François Steiner is sometimes named as well. His bestselling novel Treblinka (1966) was presented as a work of which the accuracy of every detail was guaranteed by oral or written testimony. In reality it was a fabrication attributable, at least in part, to the novelist Gilles Perrault. [10] Marek Halter, for his part, published his La Mémoire d'Abraham in 1983; as he often does on radio, he talked there about his experiences in the Warsaw ghetto. However, if we are to believe an article by Nicolas Beau that is quite favorable to Halter, [11] little Marek, about three years old, and his mother left Warsaw not in 1941 but in October of 1939, before the establishment of the ghetto there by the Germans. Halter's book is supposed to have been actually written by a ghost writer, Jean-Noël Gurgan.

Filip Müller is the author of Eyewitness Auschwitz: Three Years in the Gas Chambers, [12] which won the 1980 prize of the International League against Racism and Anti-Semitism (LICRA). This nauseous best-seller is actually the work of a German ghost writer, Helmut Freitag, who did not hesitate to engage in plagiarism. [13] The source of the plagiarism is Auschwitz: A Doctor's Eyewitness Account, another best-seller made up out of whole cloth and attributed to Miklos Nyiszli. [14]

Thus a whole series of works presented as authentic documents turns out to be merely compilations attributable to various ghost writers: Max Gallo, Gilles Perrault, Jean-Noël Gurgan (?), and Helmut Freitag, among others.

We would like to know what Germaine Tillion thinks about Elie Wiesel today. With him the lie is certainly not gratuitous. Wiesel claims to be full of love for humanity. However, he does not refrain from an appeal to hatred. In his opinion: [15]

Every Jew, somewhere in his being, should set apart a zone of hate — healthy, virile hate — for what the German personifies and for what persists in the German. To do otherwise would be a betrayal of the dead.

At the beginning of 1986, 83 deputies of the German Bundestag took the initiative of proposing Wiesel for the Nobel Peace Prize. This would be, they said, "a great encouragement to all who are active in the process of reconciliation." [16] That is what might be called "going from National Socialism to national masochism."

Jimmy Carter needed a historian to preside over the President's Commission on the Holocaust. As Dr. Arthur Butz said so well, he chose not a historian but a "histrion": Elie Wiesel. Even the newspaper Le Monde, in the article mentioned above, was obliged to refer to the histrionic trait that certain persons deplore in Wiesel:

Naturally, even among those who approve of the struggle of this American Jewish writer, who was discovered by the Catholic François Mauriac, some reproach him for having too much of a tendency to change the Jewish sadness into "morbidity" or to become the high priest of a "planned management of the Holocaust."

As Jewish writer Leon A. Jick has written: "The devastating barb, 'There is no business like SHOAH-business' is, sad to say, a recognizable truth." [17]

Elie Wiesel issues alarmed and inflammatory appeals against Revisionist authors. He senses that things are getting out of hand. It is going to become more and more difficult for him to maintain the mad belief that the Jews were exterminated or were subjected to a policy of extermination, especially in so-called gas chambers. Serge Klarsfeld has admitted that real proofs of the existence of the gas chambers have still not yet been published. He promises proofs. [18]

On the scholarly plane, the gas chamber myth is finished. To tell the truth, that myth breathed its last breath several years ago at the Sorbonne colloquium in Paris (June 29-July 2, 1982), at which Raymond Aron and François Furet presided. What remains is to make this news known to the general public. However, for Elie Wiesel it is of the highest importance to conceal that news. Thus all the fuss in the media, which is going to increase: the more the journalists talk, the more the historians keep quiet.

But there are historians who dare to raise their voices against the lies and the hatred. That is the case with Michel de Boüard, wartime member of the Resistance, deportee to Mauthausen, member of the Committee for the History of the Second World War from 1945 to 1981, and a member of the Institut de France. In a poignant interview in 1986, he courageously acknowledged that in 1954 he had vouched for the existence of a gas chamber at Mauthausen where, it finally turns out, there never was one. [19]

Elie Wiesel passes for one of the most celebrated eyewitnesses to the alleged Holocaust. Yet in his supposedly autobiographical book Night, he makes no mention of gas chambers. He claims instead to have witnessed Jews being burned alive, a story now dismissed by all historians. Wiesel gives credence to the most absurd stories of other "eyewitnesses." He spreads fantastic tales of 10,000 persons sent to their deaths each day in Buchenwald.

When Elie Wiesel and his father, as Auschwitz prisoners, had the choice of either leaving with their retreating German "executioners," or remaining behind in the camp to await the Soviet "liberators," the two decided to leave with their German captors.

It is time, in the name of truth and out of respect for the genuine sufferings of the victims of the Second World War, that historians return to the proven methods of historical criticism, and that the testimony of the Holocaust "eyewitnesses" be subjected to rigorous scrutiny rather than unquestioning acceptance.

Robert Faurisson, born in 1929, has for years been regarded as Europe's leading Holocaust revisionist scholar. He was educated at the Paris Sorbonne, and served as associate professor at the University of Lyon in France from 1974 until 1990. He is a recognized specialist of text and document analysis. After years of private research and study, Dr. Faurisson first made public his skeptical views about the Holocaust extermination story in articles published in 1978 in the French daily Le Monde. His writings on the Holocaust issue have appeared in several books and numerous scholarly articles.