Published soon after of the Scott Report into the Arms to Iraq affair. It is a critique of the published report and a review of the events which lead to it.
See Also

★ Start a Discussion about this document
Armed and Dangerous

So prolonged and extensive was the hype which heralded the Scott Report that an anti-climax was almost inevitable. The government's approach to the report of the inquiry, which it set up itself, was twofold. Before the report came out, a mighty chorus of former ministers, led by former foreign secretaries Howe and Hurd, claimed that the inquiry had been 'unfair' and 'flawed'. Senior ministers like themselves, they protested, had been asked questions which they had been given beforehand without lawyers to represent them! This was, they claimed, an interference with the inalienable rights of former ministers! On and on droned this chorus as the government braced itself for the report's publication.

When they eventually agreed to let the public read it, they released their own 'press pack' which was every bit as deceptive as any deception exposed in the report. The 'press pack' extracted the (few) sections in the report which were favourable to the government, and presented them as a fair summary. This worked a treat on the hacks in the government press (the Sun, Express, Daily Mail, Daily Telegraph, Times etc) all of whom concluded that there was no case at all for resignations. The Scott Report was then savaged in the same newspapers by journalists like former Times editor Simon Jenkins--who forgot to mention his long and close friendship with William Waldegrave, the minister most at risk from Scott's revelations. Because the million word report was issued at 3.30pm and could not possibly be read in full for at least two days after that, government ministers calculated that their own summary and the legendary laziness of their press toadies would enable them to ride out the storm. 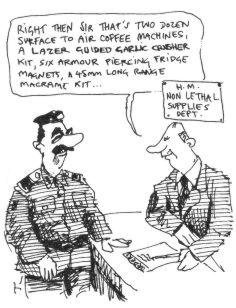 The ruse worked pretty well for a day or two but as more and more people read the report the awful truth began to sink in--that again and again, and in the most meticulous detail, Scott exposes government hypocrisy and deception on a grand scale. The basic political deception (which emerges much more clearly from the report than I had imagined) was the so-called 'tilt to Iraq'.

Most people who have studied the matter know that the US and British governments 'tilted' to Iraq during the latter stages of the long and murderous Iran/Iraq war of 1980-1988. The Scott Report pushes the tilt back to the very start of the war. As Scott's figures for military and civilian trade decisively prove, Iraq was favourite from the outset. It follows that ministers' insistence on their impartiality in the conflict - the foundation stone of their declared policy on defence sales - was sheer hypocrisy.

The clearest example of that hypocrisy was the approach of the Export Credits Guarantee Department, which guarantees British exports. From 1985, the ECGD guaranteed the sale of defence equipment to Iraq to the tune of at least £25m a year. No such guarantee was available for Iran. In 1988, when the war ended, the guarantee for Iraq was quadrupled--to £100m. The chief secretary to the treasury who approved that huge leap (and denied any similar facility to Iran) was John Major, the man who has consistently pretended that he knew little or nothing of the arms to Iraq scandal while he was chancellor of the exchequer, foreign secretary and prime minister.

In two other sections, the report exposes the central government hypocrisy--that arms to Iraq were carefully restricted throughout the period. First, all sorts of weaponry, often of the most lethal kind, got to Iraq from Britain through 'diversionary routes', chiefly through Jordan. Arms sales from Britain to Jordan were 3,000 percent (about £500 million) higher in the 1980s than in the 1970s. This had nothing to do with the expansion of the Jordanian armed forces, which were actually contracting in the 1980s. Almost all the extra weaponry went on to Iraq, and there were other conduits too: Saudi Arabia, Egypt, Portugal, Singapore, Austria.

Secondly, the 'restricted' policy became much less restricted for Iraq after the ceasefire of 1988. The entire British government was tempted by the honeypot which was opened up by Saddam Hussein as he expanded his vast armed forces after the peace treaty with Iran in 1988. The guidelines were changed to liberate a whole new category of defence sales, and no one was told about it.

The effect of the change was further to expand the close friendship between the British government and that of Saddam Hussein. In July 1990, a cabinet meeting chaired by Douglas Hurd agreed to scrap all remaining restrictions on arms sales to Iraq. But before the ministers' policy could be put into effect, their beloved ally Saddam Hussein wrecked everything by invading Kuwait. The policy of selling all arms to Iraq was rather hurriedly and nervously changed to selling no arms to Iraq. H.M. non-lethal supplies

Most people, including the Labour Party, believe that the most important part of Scott's work dealt with the Matrix Churchill trial in which 'innocent men were nearly sent to prison because the government didn't reveal the truth'. Socialists should beware this formulation. The directors of Matrix Churchill were merchants of death who knew perfectly well that the machine tools they were selling to their Iraqi customers were to be used for weapons, including nuclear weapons. They were not innocent men like the Birmingham Six or the Bridgewater Four. They were not framed for something they didn't do. Their only defence was that the government knew what they were doing and let them do it, partly because ministers shared their intrinsic capitalist belief in the right to sell arms for a profit, partly because intelligence spooks liked to play silly secret spy games with the exporters. Moral dilemmas in Whitehall

All that happened here was that HM Customs tried to enforce governmerit policy restricting arms to Iraq while the government and the manufacturers were defying that policy. This led, naturally, to a balls-up which the government tried to cover up by denying defence lawyers the information about their own complicity in a conspiracy to defy their own policy. This is the reason why, for the first time ever in a criminal trial, ministers were asked to sign 'gagging orders' to keep the information from the defence, and happily did so. Only Michael Heseltine had any doubts about signing, and he signed in the end.

What attitude should socialists take to the Scott Report? obviously, they will want to resist and expose the frantic efforts of ministers to play it down and denigrate it. On the other extreme, however, some anti-government politicians and papers have presented the report as a whitewash. The Observer's headline on the subject was 'How Scott was nobbled'. The theory here is that Scott was 'got at' and agreed to 'water down' his report. There is no evidence of this, however. The leaked drafts of the report are strikingly similar to the final version.

The misapprehension in the 'Scott was nobbled' camp arises from impatience and outrage that the judge did not overtly condemn the government and the ministers responsible for serial hypocrisy and deception. This in turn derives from the belief that a high court judge will approach these matters like any ordinary rational citizen. The idea, however, that any judge will openly condemn a Tory prime minister, especially a serving one, is plainly absurd. just as judges expect deference from their minions, they are deferential to their political masters. 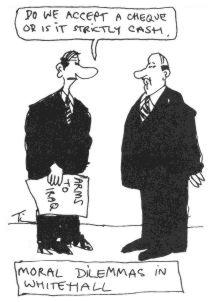 There were therefore always clear limits to what Scott would say. His attitude, for instance, to Thatcher and to Major is positively obsequious. He swallows wholesale the fantastic notion that Lady Thatcher, the most interventionist prime minister in modern times, who was fascinated above all other things by arms sales and intelligence matters, did not know that three junior ministers, all of whom worshiped or feared her, changed the whole policy of defence sales to Iraq without her ever hearing of it. Major too, according to Scott, knew nothing about anything, and gets off on that score.

But that is nowhere near the end of the story. Within the obvious limits which any socialist could have defined long before the report came out, Scott has applied himself with great care, considerable skill and determination to unraveling the mountains of secret information made available to him. It is this flow of information which makes the Scott inquiry unique.

There has been, quite literally, nothing like it before, and the result is an exposé of the way British government works which is vital to anyone who is interested in these matters, and, for those of us who challenge the notion that parliamentary democracy is democratic enough, invaluable. Over and over again, in almost every single instance he investigates, Scott shows how the civil service and the politicians, either together or separately, combined to deceive the public about what really went on. Though of course he does not spell it out, the basic purpose of that secrecy emerges quite clearly.

The entire machinery of the two major ministries most closely involved, trade and industry and defence, was organised to assist the arms companies. The attempts of the foreign office to control this 'gung-ho' approach in no way made the system any more democratic. For instance one of the main reasons why the foreign office was keen to restrict arms sales to Iraq and Iran was subservience to the government of Saudi Arabia, which was nervous of both Iran and Iraq and with whom the arms companies had far more lucrative business than anything likely to emerge from all the other Gulf states put together. So even the conflicts between the 'restricters' and the 'let-it-all-go' brigade were part of the same problem.

Parliamentary democracy was useful to the arms sellers as long as it legitimised them. If it ever threatened to expose them, or, worse, to provide damaging information about what they were doing, the entire democratic procedure of parliament was brushed aside. The liberal Scott was shocked by this. 'Why not tell people what you are doing and have a debate about it?' he kept asking officials and ministers. Their answers were always evasive and unsatisfactory, partly because the real answer ('We do things for ourselves, our class, our profit') could not be spelled out. The fact that Scott, unsurprisingly, kneels to prime ministers and avoids spelling out the full force of his own investigation should in no way deflect from this enormous indictment, which, I predict, we will go on quoting extensively for as long as the system it indicts survives.