Document:A lesson from Brussels we refuse to learn 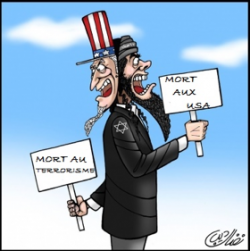 The best analysis of the Brussels attacks we can hope for from the corporate media, I suppose, are these insights from Simon Jenkins. Like many libertarians, he understands what we are doing wrong, but he can’t seem to extrapolate from there to how we might put things right. As a result, the first half of the article is impressive; the second half confused.

Here are the highlights:

Textbooks on terrorism define its effects in four stages: first the horror, then the publicity, then the political grandstanding, and finally the climactic shift in policy. The initial act is banal. The atrocities in Brussels happen almost daily on the streets of Baghdad, Aleppo and Damascus. Western missiles and Isis bombs kill more innocents in a week than die in Europe in a year. The difference is the media response. A dead Muslim is an unlucky mutt in the wrong place at the wrong time. A dead European is front-page news....

Osama bin Laden set out on 9/11 to depict western nations as feckless and paranoid, their liberalism a surface charade easily punctured. A few explosions and their pretensions would wither and they would turn as repressive as any Muslim state....

Under the government’s Prevent strategy, universities and schools must develop programmes to counter “non-violent extremism, which can create an atmosphere conducive to terrorism”. The bureaucracy will be awesome. Primary schools are reportedly asking children to spy on one another to check “suspicious behaviour”. So must passengers on Virgin trains, as requested after each station. England is becoming old East Germany.

In fact, a better – and more contemporary – comparison would be that Europe and the US are becoming very much like Israel. That is why Benjamin Netanyahu celebrated the 9/11 attacks on the US, and why two Israeli cabinet ministers are now gloating over the suffering in Belgium, with one even blaming it on western, chocolate-quaffing complacency. For decades Israel has been leading the way on “repression with a democratic facade”.

Back to Jenkins. He fails to understand the implications of his observation about Bin Laden’s strategy. It isn’t simply that Bin Laden “depicted” our liberalism as a “surface charade” and believed that under pressure we would “turn as repressive as any Muslim state”. Gradually he is being proved right, as the rest of Jenkins’ commentary implicitly concedes .

Bin Laden and his successors in ISIS are inadvertently showing us important insights about the nature and consequences of violence, whether our own or that of others – even if we are blind to the lesson.

When societies are constantly under attack from outside, they are likely to turn violent, repressive and vengeful, not because of some inherent quality in their religion or culture but because of the circumstances they find themselves in. That is as true for the Middle East, as it is for us in the “civilised” west.

The answer to ISIS is not more bombs, more “collateral damage”, more pillage of resources – we have been doing that to the Middle East for decades. We and our unquenchable greed created this monster; Islamism has simply given it its current distinctive form.

The solution must start with an entirely different strategy, one that rejects all forms of imposed intervention, whatever the dubious rationale: spreading civilisation and democracy, defeating terror or imposing western “development”. Terror cannot be defeated. But it can be shown to be irrelevant.