Document:A Plague for the Proletariat 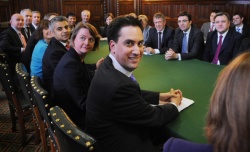 ★ Start a Discussion about this document
A Plague for the Proletariat: How the Workers’ Party Betrayed Its Own

The clue is in the name: the Labour party was founded to fight alongside the trade unions on behalf of the British working-class. You can see the roots of the alliance forming when a mining company in Scotland tried to import foreign workers at the beginning of the twentieth century. One of Labour’s greatest future heroes spoke up for the men whose wages were being undercut:

Trade Unions were openly hostile, claiming that the newcomers’ lack of English made them a danger at work; the Glasgow Trades Council declared the Lithuanians in Glengarnock as “an evil” and wrote to the TUC [Trades Union Congress] demanding immigration controls to keep them out.

Even a figure such as Keir Hardie, founding father of the Labour Party, led a fierce, xenophobic campaign against the Lithuanians. Hardie, as a leader of Ayrshire miners, wrote an article for the journal, The Miner, in which he stated that: “For the second time in their history Messrs. Merry and Cunninghame have introduced a number of Russian Poles [as the Lithuanians were described] to Glengarnock Ironworks. What object they have in doing so is beyond human ken unless it is, as stated by a speaker at Irvine, to teach men how to live on garlic and oil, or introduce the Black Death, so as to get rid of the surplus labourers.” [1]

Keir Hardie wasn’t being “xenophobic.” He was doing exactly what a Lithuanian socialist would have done if the situation had been reversed: standing up for the workers he was elected to serve. By the time Tony Blair became Labour leader in 1994, all that old-fashioned socialist nonsense had been discarded. Now the Labour party champions the downtrodden bosses against the oppressive workers.

Labour doesn’t seek to defend its traditional supporters; it seeks to harm them, as a Labour peer openly admitted in 2011:

Labour let in 2.2million migrants during its 13 years in power – more than twice the population of Birmingham. Lord Glasman, 49, had already told BBC Radio 4 recently [in 2011]: ‘What you have with immigration is the idea that people should travel all over the world in search of higher-paying jobs, often to undercut existing workforces, and somehow in the Labour Party we got into a position that that was a good thing. Now obviously it undermines solidarity, it undermines relationships, and in the scale that it’s been going on in England, it can undermine the possibility of politics entirely.’

The academic, who directs the faith and citizenship programme at London Metropolitan University, criticised Labour for being ‘hostile to the English working class’. He said: ‘In many ways [Labour] viewed working-class voters as an obstacle to progress. Their commitment to various civil rights, anti-racism, meant that often working-class voters… were seen as racist, resistant to change, homophobic and generally reactionary. So in many ways you had a terrible situation where a Labour government was hostile to the English working class.’ [2]

Now, having spat in their faces, Labour wants to persuade its working-class supporters that it won’t do the same again. It will, of course: the hostility described by Lord Glasman has never gone away. Working-class Whites would be very foolish to vote for the party again. All the same, it is entirely possible that Britain’s next prime minister will be Ed Miliband, current Labour leader. If an adolescent narcissist like Tony Blair can win three elections, an adenoidal reptile like Miliband can win one. But even in Miliband’s own constituency in Yorkshire, the discontent is obvious:

In last year’s local elections, UKIP contested four wards in Doncaster. This year it was 21. Farage’s party won just one of those, but came second in 17 and third in 3. And Ukip lost a couple of those wards by just tens of votes. In the European elections, Farage’s party topped the poll in Doncaster, with 24,240 votes to Labour’s 23,743. …

There are clearly anxieties here, as elsewhere in the country, that are not being addressed. “There are places in Doncaster when you can’t hear an English voice,” claimed Johnnie Ray, 66, a former coal miner supping ale in the Trades and Labour club, as he waited for a country and western act to begin. Asked if Miliband is saying enough to assure him, Ray spits out: “I don’t even know what he is saying.”

The potency of the issue isn’t lost on Miliband. Labour lost a million voters between 2005 and 2010. Research by Professor Geoffrey Evans and Dr Kat Chzen at Oxford University suggests that those people may have gone elsewhere not because of the economy or Gordon Brown’s unpopularity, but because of immigration. “I talked to Ed Miliband about this in his office,” said Evans. “He’s certainly aware of it. But he wants to be ‘decent’, he told me. It’s a tricky one. If you want to pick up Lib Dem votes, you don’t want to be banging on about immigration too much either. And they are so culpable for immigration that it becomes a bit implausible. It’s hard to think what Labour should do.” [3] 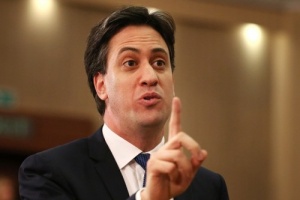 Labour will simply have to lie, make big promises they have no intention of keeping and hope that people are foolish enough to believe them. I’m worried that they will be believed, but I hope that Labour’s intentions are becoming too obvious. The party wants to turn British Whites into a minority in their own nation. But then so does the Conservative party. The mainstream parties in the U.K., just like the Republicans and Democrats in the U.S., have two reasons for existence: to serve the interests of big business and to replace liberal democracy with cultural Marxism.

Ed Miliband has no ties with or concern for the White working-class. His father, Ralph Miliband, was a Belgian Jew who sought asylum in the U.K. in 1940. He then became a leading Marxist academic here and re-paid his hosts by hoping that their society would be swept away. One of his former research assistants has described his reaction to a trip she made to “the Communist bloc” in the early 1960s:

As for East Germany: I had been terrified by the sight of military police parading through the streets and training their guns under the bridges so they could shoot anybody who tried to escape to the West by swimming along the river. I could not see how all this authoritarianism benefited people either mentally or physically. Some people seemed to be near starvation, and the streets of East Berlin seemed to have more horses and carts than cars.

When I got to describing my cynicism at seeing a newspaper poster saying ‘Walter Ulbricht 99 per cent certain of being elected’, I realised just how agitated Ralph had become. He sprang to Ulbricht’s defence, and appeared to be blind to the East German dictator’s failings — he even refused to condemn the building of the Berlin Wall. I realised that Ralph was an enthusiast for the very regimes I had come to hate. In my three years at LSE [London School of Economics] as an undergraduate, I had sat through many a lecture and coffee bar discussion in which Marxists looked forward to the contradictions in capitalism leading to its collapse and to the advent of the dictatorship of the proletariat. But I was appalled by how hardline Ralph Miliband was. He must have known of the hardship suffered by people in Communist countries, but for him, I suppose, the end justified the means. The Communist countries were heading towards a Marxist heaven. There might be teething problems on the way; but things were better in East Germany than in Britain.

Ralph did not hate Britain. He just wanted to make it better by transforming it into a Communist state, and that meant destroying a lot of Britain’s social institutions because they promoted and buttressed social inequality. The dictatorship of the proletariat would be preferable to Harold Wilson’s Labour government. [4]

But the “dictatorship of the proletariat” didn’t arrive in Britain as Marx predicted it would. That’s why Ralph’s sons David and Ed didn’t openly espouse Marxism. Instead, they entered the Labour party and became part of the traitorous cabal that opened Britain’s borders to the world. They then competed for the leadership of the party. Ed won and David left politics to help do to America what he had already done to Britain:

David Miliband is the President and CEO of the International Rescue Committee. He oversees the agency’s relief and development operations in over 40 countries and its refugee resettlement and assistance programs throughout the United States. In addition, he leads the IRC’s advocacy efforts in Washington, Geneva, Brussels and other capitals on behalf of the world’s most vulnerable people. … Miliband graduated from Oxford University in 1987 with a first class degree in philosophy, politics and economics, and received his master’s degree in political science in 1989 from the Massachusetts Institute of Technology, which he attended as a Kennedy Scholar. [5]

The Miliband brothers are part of a rootless international elite loyal only to itself and to the hybrid of predatory capitalism and cultural Marxism that now governs all Western nations. While bankers’ profits keeping on rising, the Whites who built those nations see their wages stagnate and their cities flooded by non-Whites from the Third World. And parties formed to champion the White working-class, like Labour in the U.K. and the Democrats in the U.S., are fully in favour of both the bankers and the non-Whites. It’s a sick situation, and the disease starts at the top. The British working-class need to recognize Labour for what it has now become: a plague, not a party.