Dixy Lee Ray was an American scientist and politician who served as the 17th Governor of the U.S. state of Washington. Variously described as idiosyncratic, and "ridiculously smart," she was the state's first female governor and was in office during the 1980 eruption of Mount St. Helens. She was a supporter of atomic energy.

A graduate of Mills College and Stanford University, where she earned a doctorate in biology, Ray became an associate professor at the University of Washington in 1957. She was chief scientist aboard the schooner SS Te Vega during the International Indian Ocean Expedition. Under her guidance, the nearly bankrupt Pacific Science Center was transformed from a traditional, exhibit-oriented museum to an interactive learning center, and returned to solvency.

In 1973, Ray was appointed chairman of the United States Atomic Energy Commission (AEC) by President Richard Nixon. Under her leadership, research and development was separated from safety programs, and Milton Shaw, the head of the powerful reactor development division, was removed. She was appointed Assistant Secretary of State for Oceans and International Environmental and Scientific Affairs by President Gerald Ford in 1975, but resigned six months later, complaining about lack of input into department decision making.

Ray ran for election as Governor of Washington as a Democrat in 1976. She won the election despite her blunt, sometimes confrontational, style. As governor, she approved allowing supertankers to dock in Puget Sound, championed support for unrestrained growth and development, and continued to express enthusiasm for atomic energy. On April 3, 1980 she declared a state of emergency as a result of the volcanic eruption of Mount St. Helens. She retired after losing her re-election bid for Democratic nomination later that year.

An advocate of nuclear power, in 1973 Ray was appointed by Richard Nixon to chair the U.S. Atomic Energy Commission (AEC) on the recommendation of Senator Magnuson. The offer of appointment came via a telephone call after she was paged in an airport. After being told she would have to relocate to Washington, D.C., Ray declined the offer, saying "I'm living where I like to live." Nonetheless, she ultimately relented after being persuaded by her longtime friend Lou Guzzo.[1][2] 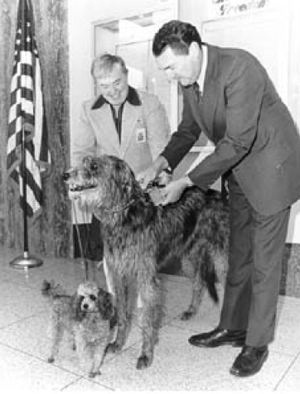 Ray and her dogs Ghillie and Jacques inspect the Hanford nuclear reservation. With them is Thomas Nemzek, at the time Director of Reactor R&D.

Following her appointment to the commission, news of her personal eccentricities began to emerge after reporters discovered she was living out of a 28-foot motor home, which was parked on a lot in rural Virginia. Each morning she was chauffeured from her RV to the AEC offices in Germantown, Maryland, accompanied by her 100-pound (45 kg) Scottish deerhound Ghillie, and a miniature poodle named Jacques.[3][4] Media reports commented on her unusual hosiery (white knee socks)

Her personal quirks were widely perceived as a weakness by tenured bureaucrats. A profile by Graham Chedd in New Scientist explained that,

Almost everyone found the eccentricities delightful, and preserved their macho with speculations of the mincemeat that would be made of her by such AEC "heavies" as Milton Shaw, head of the powerful division of reactor development, and Chet Holifield, the iron man of the congressional joint committee on atomic energy.[5]

However, less than a year after taking over, Ray had forced Shaw out, ordering that research and development be separated from safety programs as some environmental groups had demanded.[6] In addition to its research responsibilities, the AEC was charged with the manufacture of nuclear weapons for the U.S. military. Ray would later fondly recall the first time she saw a nuclear warhead describing it "like a piece of beautiful sculpture, a work of the highest level of technological skill."[7]

In 1975, Ray was appointed Assistant Secretary of State for Oceans and International Environmental and Scientific Affairs by Gerald Ford, but resigned five months later, complaining about lack of input into department decision making. She subsequently told a United States Senate committee that she "saw Secretary of State Henry Kissinger only once – the day she was sworn in as an assistant secretary of state."[8] In a parting shot as she left D.C., Ray declared that "anything the private sector can do, the government can do it worse."[9]

To the surprise of many, Ray announced in 1975 she would seek election as Governor of Washington. Ray narrowly won the Democratic nomination over Seattle mayor Wes Uhlman, having spent almost no money on her campaign, having no experience in running for elected office, and having little support from the state's political class. Despite opposition from all major newspapers and predictions from pundits that the state was not ready "for an unmarried woman who gave herself a chainsaw for Christmas," Ray went on to win the general election with a victory over King County Executive John D. Spellman, 53%–44%.

"the best governor … or the worst"

After assuming office, Ray tightened Washington state spending and began an audit of state salaries and programs. She balanced the state budget and during her tenure as Governor oversaw the state's first full funding for basic education. As the first resident of the Governor's Mansion without a First Lady, Ray hired her elder sister Marion R. Reid to serve as her official hostess.

Nonetheless, she quickly alienated fellow Democrats with her conservative views on energy and the environment. She approved allowing supertankers to dock in Puget Sound, championed support for unrestrained growth and development, and continued to express enthusiasm for atomic power. She likewise alienated the state's Republican establishment after she fired 124 appointees of her predecessor, three-term governor Daniel J. Evans, offering to send them "a box of kleenex with their pink slips." She filled their places with old colleagues, described by some as "yes men."[10] Her treatment of the media was similarly dismissive.

Ray's uncompromising belief in the correctness of her views occasionally spilled over state lines. During what was supposed to be a routine joint press conference in Boise, Idaho, by the governors of Washington, Oregon, and Idaho in which the three touted the benefits of energy conservation, Ray reacted with barely concealed disdain to Oregon governor Robert W. Straub's call for legislation to encourage the installation of home insulation. "I don't believe our citizens are lax, or lazy, or indifferent," Ray fired. "In Washington we have a strong voluntary energy conservation program. We don't need legislative incentives."[11]

Back in Washington, Ray sometimes engaged in elaborate ceremony; on her inauguration she hosted not just one but nine inaugural balls. To promulgate House Bill 491, a relatively minor $13 million appropriations measure, she had nearly 1,000 people assembled in the rotunda of the Legislative Building (the Associated Press noted, at the time, that it was ordinarily "unusual for more than a dozen people to show up" to bill signings, which would customarily be held in the governor's office).[12]

Press and political opposition solidified in the face of her unyielding style of governance. In a critical 1977 article in Mother Jones, in which he labeled Ray as a "slightly wacky Miss Marple," Ray Mungo described the increasingly madcap atmosphere in Washington:

For the first time in the four years that I've lived in Seattle, the political climate is volatile, exciting, terrifying. Each day's newspapers bring fresh atrocities from Olympia, the state capital. The opposition is mounting with volcanic pressure, and the press is almost universally merciless with Dixy. But she plows forward with a stamina that could belong only to someone who, when not living in the governor's mansion, lives on an island, in a mobile home, with five dogs.

Ralph Nader, during a visit to the state, called Ray's administration "gubernatorial lunacy."[13] Ray's own campaign manager, Blair Butterworth, vaguely quipped "we thought she would be the best governor Washington ever had, or the worst, and we were right."[14] Support from her fellow scientists, however, was often positive; Edward Teller called Ray "a very wonderful lady" and said he would support her if she ran for President of the United States in the 1980 election.[15]

Ray ran for reelection in 1980, enlisting Republican consultant Montgomery Johnson to head her campaign after her former manager, Butterworth, had defected to her rival, then-State Senator Jim McDermott. She lost to McDermott in a contentious Democratic primary election, 56%–41%, during which bumper stickers emblazoned with "Nixy on Dixy" and "Ditch the Bitch" became popular campaign tchotchkes. McDermott himself went on to lose in the general election to Republican John D. Spellman.