Dave Frasca has been termed "the cutting edge of the U.S. Government's pre-September 11 do nothing policy in regards to Al Qaeda terrorists."[1] He was in charge of the FBI's "Radical Fundamentalists Unit"[2] and used that to obstruct investigation into the 9-11 patsies. Furthermore, he reported back to Alec Station.[3]

On the morning of 9-11, David Frasca was the head of the FBI's fundamentalist terrorist unit. He allegedly called Coleen Rowley and told her not to proceed with her investigation of Zacarias Moussaoui "...because Minneapolis might 'screw up' something else going on elsewhere in the country."[4] Frasca was promoted by the Bush administration after the 9/11 attacks. 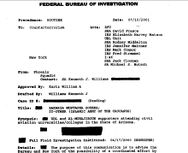 John Edwards asked Robert Mueller "Do you know whether the Phoenix Memo, in fact, was addressed to Mr. Frasca?" to which Mueller replied "I believe it was."[2]

Head of the FBI's "Radical Fundamentalists Unit". He personally scuttled the work of Kenneth Williams in July 2001 and Coleen Rowley in August 2001, the Arizona and Minnesota FBI agents who were actively investigating “terrorist” patsies in CIA-operated flight schools.[5] He was adamantly unhelpful with Zacarias Moussaoui.[6]

While obstructing real investigation by those in the RFU, he appears to have reported back to cabal members in Alec Station.[3]

After stopping the Minneapolis office from pursuing a criminal warrant against Moussaoui, Frasca was later promoted.[7]