26 March 2010,during the annual Key Resolve/Foal Eagle war exercise, the South Korean naval ship Cheonan sunk after an explosion, killing 46 seamen, in an incident that was quickly presented by commercially-controlled media and an international' investigative committee report as a torpedo attack by a North Korean midget submarine. [1][2] North Korea denied that it was responsible for the sinking.[3]

From the start, there were doubts concerning the SK official story, from various sources. This include a separate investigation conducted by scientists at the University of Manitoba yielded results that conflict with the official investigation's findings[4]. A report published online by Nature on 8 July 2010 noted several instances of groups or individuals disagreeing with the official report[5]. And an investigation by the Russian Navy also did not concur with the report.[6] North Korea's further offer to aid an open investigation was disregarded.[7].

As a result, the South Korean government declared they would prosecute people spreading "false reports", on national security grounds.

The ship sank about 1 nautical mile off the South West Coast of Baengnyeong Island in the Yellow Sea and close to the disputed maritime border with North Korea Map, ki. The island is dominated by a joint U.S.-Korean base for anti-submarine warfare (ASW) operations. The sea channel between Byeongnyeong and the North Korean coast is narrow enough for both sides to be in artillery range of each other. 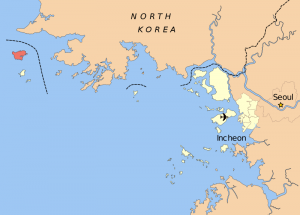 On the night of the sinking, the U.S. and South Korean navies were engaged in joint anti-submarine warfare exercises 75 miles (121 km) away.[8][9] This was part of the annual Key Resolve/Foal Eagle war exercise, described as "one of the world's largest simulated exercises", involving many U.S. and South Korean warships.[10][11]

Cheonan was operating its active sonar at the time, which did not detect any nearby submarine.[12]

In early April, an Joint Civilian-Military Investigation Group was held by "a panel of International experts", concluding by May that "the evidence points overwhelmingly to the conclusion that the torpedo was fired by a North Korean submarine.", a position repeated by then U.S. Secretary of State Hillary Clinton[15]. It's concluding paragraph states:

Based on all such relevant facts and classified analysis, we have reached the clear conclusion that ROKS "Cheonan" was sunk as the result of an external underwater explosion caused by a torpedo made in North Korea. The evidence points overwhelmingly to the conclusion that the torpedo was fired by a North Korean submarine. There is no other plausible explanation.

The report is described as having been "conducted by a team of international experts", giving it an air of authority which its language, general format, presentation and speed of completion do not warrant. Here is what Stephen Gowans has to say on the matter:

It is true that the Cheonan inquiry was made up of representatives of various countries that are hostile to north Korea. It was, then, “international,” in a very limited, and deceptive, sense. It wasn’t a board of inquiry comprised of members of the non-aligned movement, or drawn randomly from the UN general assembly, for example — boards that, had they been assembled, would have had a legitimate claim to being labeled ‘international’ in a sense that bears substantive, rather than deceptive, meaning. Labeling the inquiry ‘international’ is an attempt to deceive by using ‘international’ to mean ‘unbiased’ when the inquiry clearly wasn’t unbiased toward south Korea’s agenda. A board of inquiry assembled by the Soviet Union, comprising representatives of East Germany, Poland, Czechoslovakia, Romania, Hungary and Cuba, would have been international, too. But it would hardly be expected that the board would have arrived at a conclusion at odds with Soviet interests. Likewise, the idea that a board of inquiry comprising representatives of countries that are south Korean allies, and which share an antagonism toward the DPRK, should render findings at odds with south Korea’s agenda, is absurd in the extreme. [16]

Development of the story of the sinking in the Western commercially-controlled media has followed the usual pattern of reporting on matters involving countries seen as enemies. Such countries are routinely demonized as 'rogue states' part of an 'axis of evil' and generally ridiculed as beyond the pale of Western civilized values. Their version of events is at best reported briefly; at worst simply ridiculed. The Western interpretation is repeated ad nauseam and pariah status is thus reinforced. So it is with the sinking of the Cheonan; and yet there is solid evidence, quite apart from rigorous intuition, pointing to either a deliberate false-flag operation or a 'friendly fire' event blamed on North Korea for patently obvious geo-political reasons.

As ever, the question Cui bono? reveals facts and motivations which the official narrative does its best to minimize or conceal.

Discourse over the events leading to the sinking of Cheonan was tightly controlled by the South Korean government in the months after the incident. On 8 May 2010, a former senior presidential secretary who served under Roh Moo-hyun, Park Seon-won, was charged with libel by South Korea's Defense Minister, Kim Tae-young, over comments he made on radio asking for greater disclosure from the military and government. Park Seon-won's response to the charge was: "I asked for the disclosure of information for a transparent and impartial investigation into the cause of the Cheonan sinking;" he added that "the libel suit seeks to silence public suspicion over the incident."[17]

South Korea's Minister of Public Administration and Security, Maeng Hyung-kyu, announced on 20 May 2010 that the government was stepping up efforts to prosecute people who spread "groundless rumors" over the internet: "Anyone who makes false reports or articles about the incident could seriously damage national security. We will not let these be the basis of any risks the nation faces." Moreover, he announced the government would step up efforts to prevent "illegal gatherings" regarding the sinking of Cheonan.[18]

A South Korean military oversight board, the Board of Inspection and Audit, has accused senior South Korean naval leaders of lying and hiding information. Said the board, "Military officers deliberately left out or distorted key information in their report to senior officials and the public because they wanted to avoid being held to account for being unprepared."[19]

Even the Western narrative soon showed doubts (as reflected in the Wikipedia article). Voice of America reported on 9 July 2010 that several US professors had raised doubts about the incident [20]

In May 2010, Global Research reported that a US nuclear submarine had sunk in the same are around the same time as the Cheonan, pointing to the possibility of friendly fire between the two vessels:

“But around the time of this incident another sinking occurred that has hardly been reported in Japan. Near the site of the sinking of the Cheonan, a colossal object, which appears to be a US submarine, was found to have sunk. An ROK underwater team searched for, and on April 7 South Korea’s KBS TV showed, a US helicopter carrying what seems to be the body of a US soldier. KBS is a public broadcasting station with the highest credibility in South Korea."

"ROK and US authorities did their best to hide the fact that a US submarine sank at about the same time as the Cheonan.... On the day of the incident, the exercise was underway. After the incident, the US-ROK authorities made no mention of the fact that the joint military exercise was in progress. But the day after the incident, various ROK media and newspapers reported that the Cheonan might have been sunk by friendly fire during the military exercise.”
Tanaka Sakai [21]