The Celle Hole is the name for a hole that had been blasted into the outer wall of the prison of Celle, Germany. This was part of a campaign by one of the West German secret service agencies[1] and the specialized counter terrorism force GSG 9, in an attempt to lay blame on the Red Army Faction, West Germany's most active and prominent left-wing terrorist group.

In 1986 it was revealed to have been a plot by the government under the code name "Operation Fire Magic".[2][3][4] Ernst Albrecht, the father of later EU-president Ursula von der Leyen, was informed and involved and in the matter.[5] 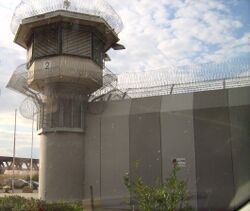 Watch tower of the JVA Celle

The secret services used a stolen Mercedes SL, driven by two criminals named Klaus-Dieter Loudil and Manfred Berger, who were recruited by the secret services. In the car were forged passports, one passport with a photograph of Sigurd Debus. Serial numbers of the passports showed that they were stolen from German authorities. Mr. Debus was an inmate in the Celle prison. He was considered as a Red Army Faction terrorist suspect. Some tools to be used for a prison escape attempt were brought secretly to Mr. Debus' prison cell by the secret services.

The action should have had taken place one night earlier when twelve secret service officers, one GSG 9 demolition squad officer and Jürgen Wiehe, a civil servant in the ministry of interior of the state of Lower Saxony waited for the right moment to detonate the bomb on July 24th. But they had to interrupt the action when two lovers, coming from the nearby funfair, entered the danger zone. So the action was deferred.

On July 25, 1978 at 2:54 a.m. the bomb was detonated at the outer prison wall, but caused limited damage only. No inmate was able to escape. The Mercedes was caught later in Salzgitter] (80 km away) in a police road block, the driver escaped. The false passports and some ammunition were found in the car. 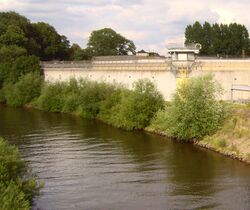 Prison wall behind the river Aller

A handgun, which was the official pistol of one of the secret service officers, as well as a rubber dinghy, were found. After the detonation, Debus' conditions of detention were aggravated for security reasons. The secret service had planted escape tools into Debus' cell, which were found in the search after the attack, and were supposed to prove Debus' participation.

Dead in Connection with Hunger Strike

1979 Debus was transferred to a different prison. From February 11, 1981, he took part in a hunger strike by the RAF members there, after a request for easier detention conditions, with reference to the bogus escape attempt, was rejected. From March 19, 1981, he was force-fed. On April 8th he fell into a coma and had to be ventilated from April 10th. He died on April 16, shortly before the date of his discharge from prison.

The autopsy revealed that the cause of death was "death of brain tissue with cerebral haemorrhage and greatly increased blood pressure"[6]. Debus died despite being force-fed as doctors ignored severe deficiency symptoms of thiamine (vitamin B1).[7] The question of whether the hunger strike or force-feeding failure was the cause of death remains open.[8]

This page imported content from Wikipedia on 18 March 2021‎.
Wikipedia is not affiliated with Wikispooks.   Original page source here