The Peteano bombing of May 31, 1972 was a booby trapped car bomb claimed the lives of three carabinieri. This bomb broke the unspoken understanding that Operation Gladio would not target agents of the state. Its exposure after investigation by judge Felice Casson was a major step in the uncovering of Operation Gladio.

Following juridical investigations, it has been discovered that the C4 explosive used in the 1972 bombing came from a Gladio arms dump located beneath a cemetery near Verona, whose existence was revealed to judges Felice Casson and Carlo Mastelloni by Giulio Andreotti, former Prime minister of Italy.

Casson's investigations revealed that Marco Morin, an explosives expert who worked for the Italian police and a member of Ordine Nuovo far-right group, had deliberately provided a fake expertise, claiming that the explosives used were the same that the Red Brigades used. However, Casson demonstrated that the explosive used was in fact C4, the most powerful explosive then known, and one that was used used by NATO. A group of Carabinieri had accidentally discovered on February 24, 1972, an arms dump near Trieste, containing weapons, ammunition and C4 identical to the one used in Peteano the same year.

“Casson's investigation revealed that the right-wing organization Ordine Nuovo had collaborated very closely with the Italian Military Secret Service, SID (Servizio Informazioni Difesa). Together, they had engineered the Peteano terror and then wrongly blamed the militant extreme Italian left, the Red Brigades. Judge Casson identified Ordine Nuovo member Vincenzo Vinciguerra as the man who had planted the Peteano bomb... He confessed and testified that he had been covered by an entire network of sympathizers in Italy and abroad who had ensured that after the attack he could escape. 'A whole mechanism came into action', Vinciguerra recalled, 'that is, the Carabinieri, the Minister of the Interior, the customs services and the military and civilian intelligence services accepted the ideological reasoning behind the attack.'[1][2]”
Daniele Ganser (February 11, 1998) [citation needed]

Retrieved from "https://wikispooks.com/w/index.php?title=Peteano_bombing&oldid=148193"
Categories:
... more about "Peteano bombing"
RDF feed
Constitutes
Booby trap +  and Car bomb +
Description
A suicide bomb attack which lured 3 carabinieri to their deaths with a booby trapped car bomb. The cover up of this murder - and its later uncovering by Italian judge Felice Casson was a major event in the exposure of Operation Gladio. +
Display docType
Wikispooks Page +
Display image
File:Peteano bombing.png +
Display image2 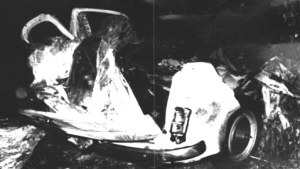