The blood–brain barrier (BBB) is a highly selective permeability barrier. It controls what gets from the bloodstream into the brain, and what does not. The 2015 Handbook of Toxicology of Chemical Warfare Agents states that the BBB “protects the brain from pathogens” and “presents a major obstacle for potential central nervous system preventative and therapeutic agents that target the CNS.”[1] Billions of scraping sticks (PCR tests) were used close to the BBB during the Covid deep event.

For example, things that the brain needs to survive (water, glucose, and amino acids) can get through the barrier. However, the barrier stops many harmful things, like bacteria and viruses, from getting into the brain. This helps protect the brain from getting an infection.

The blood-brain barrier is formed by capillary endothelial cells.[2] It allows the passage of water, some gases, and lipid-soluble molecules by passive diffusion. It also allows the selective transport of molecules such as glucose and amino acids which are crucial to nerve function.[3] On the other hand, the blood-brain barrier may prevent the entry of neurotoxins by means of an active transport mechanism.

A few small areas in the brain do not have a blood-brain barrier. The olfactory system bypasses the cellular barriers of the central nervous system and provides a direct portal from the nasal cavity to the olfactory bulb within the brain.[4] 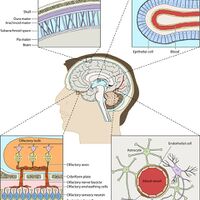 Anatomical locations and organizations of the blood-brain and blood-cerebrospinal fluid barriers and the olfactory portal. The BBB is formed by tight junctions between endothelial cells lining cerebral microvessels, in addition to pericytes and astrocytes.

The blood–brain barrier protects the brain from many common infections. Infections of the brain are rare. If they do happen, they are often serious and difficult to treat. Antibodies (which the body's immune system makes to fight infections) are too large to cross the blood–brain barrier. Also, many antibiotics cannot pass through the BBB to kill the infection in the brain.[5]

Some bacteria, viruses, and other things can get through the blood-brain barrier and damage the brain. For example:

Nanoparticles for drug delivery to the brain

Nanoparticles for drug delivery to the brain is a method for transporting drug molecules across the blood–brain barrier (BBB) using nanoparticles. These drugs cross the BBB and deliver pharmaceuticals to the brain for therapeutic treatment of neurological disorders. These disorders include Parkinson's disease, Alzheimer's disease, schizophrenia, depression, and brain tumors. Part of the difficulty in finding cures for these central nervous system (CNS) disorders is that there is yet no truly efficient delivery method for drugs to cross the BBB. Antibiotics, antineoplastic agents, and a variety of CNS-active drugs, especially neuropeptides, are a few examples of molecules that cannot pass the BBB alone.[8] With the aid of nanoparticle delivery systems, however, studies have shown that some drugs can now cross the BBB, and even exhibit lower toxicity and decrease adverse effects throughout the body. Toxicity is an important concept for pharmacology because high toxicity levels in the body could be detrimental to the patient by affecting other organs and disrupting their function. [9] Though there exist many obstacles that make developing a robust delivery system difficult, nanoparticles provide a promising mechanism for drug transport to the CNS.

Bypassing it via the nasal cavity

A 2020 German study discussed how to bypass the BBB through the nose[10]:

"In the case of MS and other neurodegenerative diseases, the effectiveness of the, often very expensive, biopharmaceutical drugs is limited by the fact that the blood-brain barrier makes transporting the active pharmaceutical ingredient via the bloodstream or the digestive tract, in the case of oral intake, to the destination (i.e. the damaged areas of the CNS) difficult or even impossible. The blood-brain barrier consists of a layer of endothelial cells around the blood capillaries. The cells are particularly tightly connected to one another, making the layer practically impermeable to many substances."[10]

"However, there are gaps in the blood-brain barrier where the nerves emanating from the sensory organs enter the brain. It has been shown in the animal model that therapeutic macromolecules such as neuropeptides, insulin and other hormones, which cannot normally penetrate the blood-brain barrier, reach the CNS quickly via the olfactory nerve in the nose. The transport of macromolecular therapeutic agents into the brain after “intranasal” administration has also been demonstrated for humans. The active ingredients follow the fibre bundles of the olfactory nerve, which lead from the sensory cells of the olfactory epithelium (the olfactory mucosa) in the nasal cavity through fine channels of the ethmoid bone, a bone that separates the nasal cavity from the brain, to the olfactory bulb in the cerebrum (see Figure)."[10]

Hundreds of millions of people worldwide had PCR swabs pushed up their noses during Covid from 2020 onward, leading to documented cases of damage to the BBB.[12] A 2021 case study published in the European Journal of Neurology found that a 41-year-old woman developed meningitis (swelling of the brain and spinal cord membranes) after a PCR swab test. Researchers concluded that the meningitis was caused by a post-PCR cerebral spinal fluid leak after a “rupture between barriers from the nasal cavity and paranasal sinuses from the subarachnoid spaces.[13]