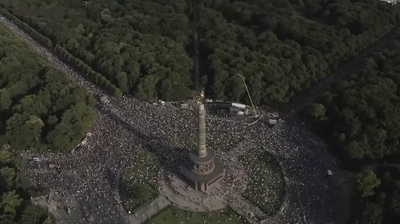 On Saturday 29 August, 2020 between 40,000 (police estimate) and well more than 100,000 (organizers' estimate) people took to the streets in Berlin, the capital of Germany for a peaceful, cross-political demonstration against the COVID rules including lockdowns and compulsory face masks.

On the evening of the same day, police permitted a smaller far right rally on the steps of Parliament, leading to an incident eerily foreshadowing the 2021 Washington D.C. false flag attack.

One purpose of the Parliament incident was to tar all COVID-dissidents with the same brush, as Nazis. This has been the main PR-strategy globally to marginalize opposition. This attempt was tried at earlier demonstrations by staged unfurling of Nazi banners in front of TV-cameras, and by a small antifa counter-demonstration.

In the morning of Saturday 29 August, a peaceful, cross-political crowd of over hundred thousand people gathered to protest against the COVID emergency rule. A previous ban by the authorities on the protests had been nullified by the courts, on condition of ensuring through announcements and orderlies that the minimum physical distance requirement would be met; no face mask requirement was made[1].

People gathered in the city centre, planning to march from Unter den Linden to the Brandenburger Tor and Berlin Victory Column. Policemen who later blew the whistle described "a relaxed and peaceful atmosphere". The demonstration included a speech by Robert F. Kennedy Jr. With the pretext that most demonstrators refused to keep the dictated 1½ meters distance or wear a nose and mouth covering that the police had declared after the physical distance breaches, the police dispersed this demonstration after a few hours.[1]

The Storming of the Reichstag Building 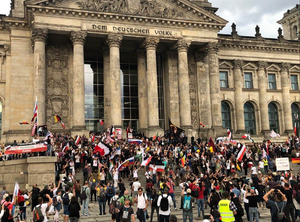 Despite encouragement, the evening demonstrators did not take the bait and enter the building.

Towards evening same day, 29 August, police permitted protesters, many from the far right, to assemble on the front steps of the Reichstag, the German parliament. This is a highly unusual decision, given the possibility of an incident and the historical significant of the building, which burned down in 1933 in an act that enabled the Nazis to destroy what remained of German democracy between the two world wars.

Many flags and T-shirts associated with the far right could be seen among the crowd. The crowd was incited by a demagogue to break the barriers to the Reichstag. Some of the demonstrators managed - conspicuously easy - to break through a cordon and get on the stairs. Only a handful of officers were there to block the crowd[2]. Despite encouragement, the crowd did not storm the building, and were dispersed by police using pepper spray.[3]

Later, the police officer group Federal Working Group of Critical Policemen asked the authorities to disclose how many intelligence operatives and other police informers were present at the gatherings. Dozens of informants were also present just from the local Berlin security service.[4]

The Berlin police were thus led yesterday in such a way that in the end there existed a certain amount of justification for the Interior Minister and Police President to prohibit it, due to an alleged threat to the Reichstag and the nonsense in front of the Russian embassy, ​​a few hundred meters away. Both unacceptable.

We want to know:

German politicians predictably condemned the incident as "an unbearable attack on the heart of our democracy". The story was spread internationally, for example by the New York Times[5].

Counter-protests against the main march also took place, with about 100 people at one rally. "You are marching with Nazis and Fascists," shouted some participants.[3] For its size, it was given ample coverage in corporate media. 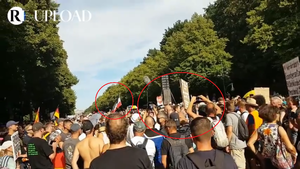 Just as the ZDF camera team got close, a man ran in front of it with a black-white-red flag.

According to corporate journalists, the demonstrators have since the beginning essentially consisted of “Nazis and madmen”[6]. In an earlier demonstration on 1 August, most footage show a large, colorful, peaceful crowd[7]. So it would take some effort for media to find a suitable "right wing extremist" image.

But at the end of the demonstration, just as the crowd was distracted by the police declaring it over, 3 demonstrators unfurled right-wing flags (the black-white-red imperial flag) right next to the cameras of ZDF. As the other footage show, this was the only time such flags were shown, in a crowd that fairly obviously would not have accepted them. There was a separate right wing demonstration in a different place at that time.[8]

The Youtuber Lars Töpfer investigated the lucky coincidence, and provided clues and evidence that the clearly visible “3 Nazis” were among the huge number of demonstrators may have been extras for ZDF. If they weren't, they were at least used to create a completely false distortion of the demonstrations in Berlin. [8]