Across all its campuses, the university comprises some 23,258 students.[7] In addition to the main campus in Oxford and the medical school in Jackson, the university also has campuses in Tupelo, Booneville, Grenada, and Southaven, as well as an accredited online high school.[8] About 55 percent of its undergraduates and 60 percent overall come from Mississippi, and 23 percent are minorities; international students respectively represent 90 different nations.[9] It is one of the 33 colleges and universities participating in the National Sea Grant Program and a participant in the National Space Grant College and Fellowship Program.[10]

Ole Miss was a center of activity during the American civil rights movement when a race riot erupted in 1962 following the attempted admission of James Meredith, an African-American, to the segregated campus.[11] Although the university was integrated that year, the use of Confederate symbols and motifs has remained a controversial aspect of the school's identity and culture.[12][13][14][15][16] In response the university has taken measures to rebrand its image, including effectively banning the display of Confederate flags in Vaught-Hemingway Stadium in 1997, officially abandoning the Colonel Reb mascot in 2003, and removing "Dixie" from the Pride of the South marching band's repertoire in 2016.[17][18][19] In 2018, following a racially charged rant on social media by an alumnus and academic building namesake, former Chancellor Jeffrey Vitter reaffirmed the university's commitment to "honest and open dialogue about its history", and in making its campuses "more welcoming and inclusive".[20]Template:Failed verification 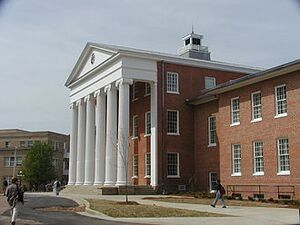 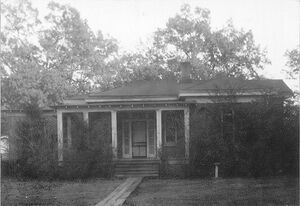 The "Dead House" was built before the Civil War and was used as a morgue during the war. Bodies were carried from the Dead House across campus to the Civil War Cemetery, which contains more than 430 graves. The building was demolished in 1958, and Farley Hall--which contains the School of Journalism and New Media--was erected in its place.[21]

The Mississippi Legislature chartered the University of Mississippi on February 24, 1844. The university opened its doors to its first class of 80 students four years later in 1848. For 23 years, the university was Mississippi's only public institution of higher learning, and for 110 years it was the state's only comprehensive university.[22] Politician Pryor Lea was a founding trustee.

When the university opened, the campus consisted of six buildings: two dormitories, two faculty houses, a steward's hall, and the Lyceum at the center. Constructed from 1846 to 1848, the Lyceum is the oldest building on campus. Originally, the Lyceum housed all of the classrooms and faculty offices of the university. The building's north and south wings were added in 1903, and the Class of 1927 donated the clock above the eastern portico. The Lyceum is now the home of the university's administration offices. The columned facade of the Lyceum is represented on the official crest of the university, along with the date of establishment.[23]

In 1854, the university established the fourth state-supported, public law school in the United States, and also began offering engineering education.[24]

With the outbreak of the Civil War in 1861, classes were interrupted and almost the entire student body (135 out of 139 students) enlisted in Company A of the 11th Mississippi regiment of the Confederate army.[25] This company, nicknamed the University Greys, suffered a 100% casualty rate in Pickett's Charge.[25]

The Lyceum was used as a hospital during the Civil War for both Union and Confederate soldiers, especially those who were wounded at the battle of Shiloh. Two hundred-fifty soldiers who died in the campus hospital were buried in a cemetery on the grounds of the university.[26][27]

During the post-war period, the university was led by former Confederate general A.P. Stewart, a Rogersville, Tennessee native. He was Chancellor from 1874 to 1886.[28]

The university became coeducational in 1882 and was the first such institution in the Southeast to hire a female faculty member, Sarah McGehee Isom, doing so in 1885.[29]

The nickname "Ole Miss" dates to 1897, when the student yearbook was first published. A contest was held to solicit suggestions for a yearbook title from the student body, and Elma Meek submitted the winning entry. Interviewed by the student newspaper, The Mississippian, in 1939, Meek stated: "I had often heard old 'darkies' on Southern plantations address the lady in the 'big house' as 'Ole Miss'... the name appealed to me, so I suggested it to the committee and they adopted it." [30][31][32] Some historians concur that she derived the term from "ol' missus," an African-American term for a plantation's "old mistresss", while others have alternatively theorized Meek may have made a diminutive of "old Mississippi".[33][34][35] This sobriquet was not only chosen for the yearbook, but also became the name by which the university was informally known.[36] "Ole Miss" is defined as the school's intangible spirit, which is separate from the tangible aspects of the university.[37][38]

Several attempts were made via the executive and legislative branches of the Mississippi state government to relocate or otherwise close the University of Mississippi. The Mississippi Legislature between 1900 and 1930 introduced several bills aiming to accomplish this, but no legislation was ever passed by either house. One such bill was introduced in 1912 by Senator William Ellis of Carthage, Mississippi, which would have merged the college with then-Mississippi A&M.[40] However, this measure was soundly defeated, despite the bill only seeking to form an exploratory committee.

In February 1920, 56 members of the legislature arrived on campus and discussed with students and faculty the idea of consolidating MS A&M, MS College of Women and Ole Miss to be in Jackson, rather than appropriate $750,000.00 of funds requested by then-Chancellor Joseph Powers which were needed to repair dilapidated and structurally unsound buildings on the campus, which was discovered following the partial collapse of a dormitory in 1917 and a scathing review of other buildings later that same year by the state architect.[41] These funds, plus an additional $300,000.00 were given to the school, which was used to build 4 male dormitories, a female dormitory – which partially resolved a longstanding issue of inadequate dormitory space for students – and a pharmacy building. During the 1930s, Mississippi Governor Theodore G. Bilbo, a populist, tried to move the university to Jackson. Chancellor Alfred Hume gave the state legislators a grand tour of Ole Miss and the surrounding historic city of Oxford, persuading them to keep it in its original setting.

During World War II, UM was one of 131 colleges and universities nationally that took part in the V-12 Navy College Training Program, which offered students a path to a Navy commission.[42]

Integration of 1962 and legacy 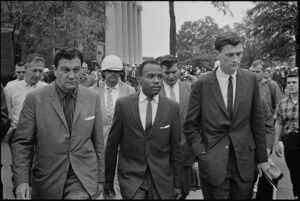 James Meredith walking to class at the University of Mississippi, accompanied by U.S. Marshals
See also: Ole Miss riot of 1962

Desegregation came to Ole Miss in the early 1960s with the activities of United States Air Force veteran James Meredith from Kosciusko, Mississippi. Even Meredith's initial efforts required great courage. All involved knew how William David McCain and the white political establishment of Mississippi had recently reacted to similar efforts by Clyde Kennard to enroll at Mississippi Southern College (now the University of Southern Mississippi).[43][44][45][46]

Meredith won a lawsuit that allowed him admission to the University of Mississippi in September 1962. He attempted to enter campus on September 20, September 25, and again on September 26,[47] only to be blocked by Mississippi Governor Ross R. Barnett, who proclaimed "...No school in our state will be integrated while I am your Governor. I shall do everything in my power to prevent integration in our schools."[48]

After the United States Court of Appeals for the Fifth Circuit held both Barnett and Lieutenant Governor Paul B. Johnson, Jr. in contempt, with fines of more than $10,000 for each day they refused to allow Meredith to enroll,[49] President John F. Kennedy dispatched 127 U.S. Marshals, 316 deputized U.S. Border Patrol agents, and 97 federalized Federal Bureau of Prisons personnel to escort Meredith to the campus on September 30, 1962.[50][51]

Two civilians were killed by gunfire during the riot, French journalist Paul Guihard and Oxford repairman Ray Gunter.[52][53] Eventually, 3,000 United States Army and federalized Mississippi National Guard troops quickly arrived in Oxford that helped quell the riot and brought the situation under control.[54] One-third of the federal officers, 166 men, were injured, as were 40 federal soldiers and National Guardsmen.[55]

After control was re-established by federal-led forces, Meredith was able to enroll and attend his first class on October 1. Following the riot, Army and National Guard troops were stationed in Oxford to prevent future similar violence. While most Ole Miss students did not riot prior to his enrollment in the university, many harassed Meredith during his first two semesters on campus.[56]

According to first-person accounts, students living in Meredith's dorm bounced basketballs on the floor just above his room through all hours of the night. When Meredith walked into the cafeteria for meals, the students eating would all turn their backs. If Meredith sat at a table with other students, all of whom were white, they would immediately move to another table.[56] Many of these events are featured in the 2012 ESPN documentary film Ghosts of Ole Miss.