The University of Guelph (U of G) is a comprehensive public research university in Guelph, Ontario, Canada. It was established in 1964 after the amalgamation of Ontario Agricultural College, the MacDonald Institute, and the Ontario Veterinary College, and has since grown to an institution of more than 32,000 students (including those at the Humber campus, off-campus degree enrolments, diploma enrolments and part-time students) and over 1,500 faculty (academic staff) as of fall 2015. It offers 94 undergraduate degrees, 48 graduate programs, and 6 associate degrees in many different disciplines.

The Veterinary medicine program at the University of Guelph was ranked 4th in the world in 2015.[1] The University of Guelph is ranked 4th in Canada in Maclean's "University Rankings 2018"[2] in the Comprehensive category, which includes universities that conduct a significant degree of research and offer a wide range of undergraduate, graduate and professional degrees. It is given top marks for student satisfaction among medium-sized universities in Canada by The Globe and Mail. It has held these rankings with its reputation, innovative research-intensive programs, and lively campus life cited as particular strengths. According to the Journal of Hospitality & Tourism Research, the university's Hospitality and Tourism Management program has Canada's highest research index. The University of Guelph has also been ranked 50th by Times Higher Education in their list of the top 100 universities under 50 years old.[3] The university has a key focus on life science and has ranked 76–100 in the world by ARWU.

The faculty at the University of Guelph hold 28 Canada Research Chair positions in the research areas of natural sciences, engineering, health sciences and social sciences.[4] Academic achievements include the first scientific validation of water on Mars, Alpha Particle X-ray Spectrometer (APXS) on board the Curiosity rover,[5] and the Barcode of Life project for species identification.

The University of Guelph traces its origins back to when the Ontario government bought 200 hectares (500 acres) of farmland from Frederick William Stone and opened the Ontario School of Agriculture on May 1, 1874, which was renamed the Ontario Agricultural College (OAC) in 1880.[6] The Experimental Farm has been part of the original project along with the museum of agriculture and horticulture. Its first building was Moreton Lodge, located where Johnston Hall now stands, which included classrooms, residences, a library, and a dining room. In 1874, the school started an apiculture department, teaching students about bees and beekeeping, in a dedicated building. In more recent years, the program has continued at the Honey Bee Research Centre located in the Arboretum, continuing research on honeybee health, providing apiculture and beekeeping courses and offering "many other educational experiences" including informative videos for beekeepers.[7] [8] 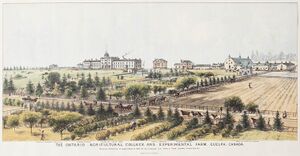 The Macdonald Institute was established in 1903 to house women's home economics programs, nature studies, and some domestic art and science.[9] It was named after its financier, Sir William Macdonald, who worked to promote domestic sciences in rural Canada, and founded Macdonald College and McGill University College. The Ontario Veterinary College (OVC), founded in Mimico in 1862, was moved to Guelph in 1922.[10] Famous economist John Kenneth Galbraith was an undergraduate at the college (graduating in 1931). In 1919 the Ontario Agricultural College aimed at recruiting "farm boys" with a low cost, two-year program ($20.00 per year) and "the lowest possible rate" for room and board.[11] 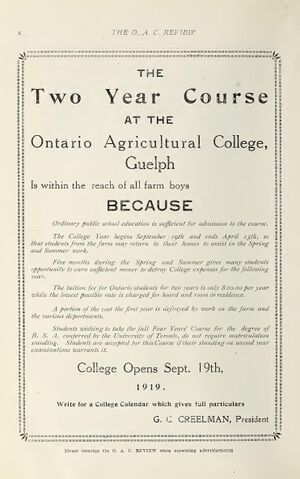 The Ontario Legislature amalgamated the three colleges into the single body of the University of Guelph on May 8, 1964. The University of Guelph Act[12] also brought about the Board of Governors to oversee administrative operations and financial management, and the Senate to address academic concerns. The non-denominational graduate and undergraduate institution was, and remains known especially for the agricultural and veterinary programs that shaped it.

The university is named after the city. Guelph comes from the Italian Guelfo and the Bavarian-Germanic Welf also known as Guelf. It is a reference to the reigning British monarch at the time Guelph was founded, King George IV, whose family was from the House of Hanover, a younger branch of the House of Welf was sometimes spelled as Gwelf.[13]