Stephen McCarthy was one of sixteen children born to Irish parents Christy and Biddy McCarthy in Islington, north London.

In November 1970, Stephen McCarthy was arrested in Upper Street, Islington, by two policemen who were alleged to have banged his head against a lamppost. He died two months later of head injuries he sustained.[1]

Worthy of a Stanley Kubrick film

The story of the death of Stephen McCarthy is so bizarre that one would be forgiven for thinking it was a Stanley Kubrick film.

In late 1969, an 18-year-old youth was arrested and charged with taking and driving away a car. He was found guilty and sent to Borstal, from where he escaped four months later. In November 1970 he was re-arrested and brutally beaten by the police. Two months later young Stephen McCarthy died.

Due to the courageous stand of the McCarthy family in their uncompromising search for justice it has become only too clear that Stephen McCarthy was murdered. He died as a direct result of police brutality and medical negligence in prison.

Stephen's murderers have been well protected by the rest of the state. This whole case has been one cover up after another by the entire state machine.

The Metropolitan Police have consistently tried to intimidate the McCarthy family into silence. But they have been unsuccessful.

In November 1970, Stephen was arrested in Upper Street by PCs Leonard and Kilshaw. It was due to their brutality that the family came to hear of the arrest several days later. By then the account of how Stephen's head had been beaten against a bus stop by the police, resulting in eight stitches, was being spoken about all over Islington.

The family immmediately went to Islington police station to enquire about Stephen. They were told that he had received his injuries as a result of "running into a bus stop while trying to evade arrest."

Over a week later they saw Stephen for the first time since his arrest when he appeared at Old Street Court looking very ill.

In the cells he told his sister how he had been deaf in one ear since the arrest, how his arm was stiff and very painful and that he was receiving no medical treatment whatsoever.

On January 14th Stephen failed to appear at the Inner London Sessions because of illness. The family were told by Borstal that it was nothing to worry about.

The very next day Stephen was rushed to hospital with a suspected mastoid. He was immediately transferred to a neurology hospital for an emergency brain operation.

On 19th February the inquest was held. The two murderers, Leonard and Kilshaw, were the guests of honour. They were allowed to remain in court throughout the proceedings , while the McCarthy witnesses were only allowed in to give evidence. The coroner wouldn't allow doctors from either of the hospitals attending Stephen, or his probation officer, to attend. No doubt these witnesses would not lie the way that the medical officer from Wormwood Scrubs would, who was called.

The Coroner advised the jury to return a verdict of death by natural causes and to throw out the charges of manslaughter and murder.

After receiving the verdict he had asked for, he had the audacity to turn to the family and said he hoped that justice had been done.

On 15th February the McCarthy family held a public meeting at Islington Town Hall. By now it had become clear that there was not going to be any justice from the state, and the only way the facts would become known, was if the people themselves held an inquiry. The meeting ended with a demonstration to the police station protesting at the fascist murder of Stephen McCarthy.

The police in their desperation to cover up the whole affair, brutally attacked the demonstration. They made 17 arrests, including 4 of the McCarthy family, one of whom had to spend the night in hospital as a result of the injuries he received at the hands of the police. Stephen's brother and sister-in-law were arrested later that night driving home, they were charged with assaulting the police.

We, in the London Alliance, support the family's just demand for an independent inquiry into to the murder of Stephen McCarthy. We demand the truth be told and the murderers brought to trial.

We demand an end to police brutality. The people will no longer stand by quietly and allow the fascist thug police on orders from their masters, to brutalise the people.

We pledge our complete support to the courageous McCarthy family and join with them and all justice loving people in demanding that the death of Stephen McCarthy and all the other victims of the Nazi police be avenged!

The chronology of events is perhaps the most telling part of this grim tale:

"Who Killed Stephen McCarthy?" is a small booklet available from: 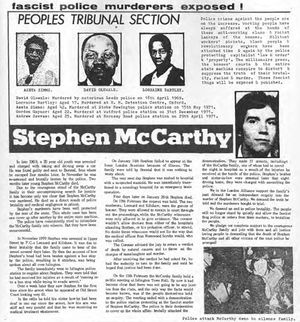