This is a very real and happening threat to our whole country, we need to unite against the extremists. We are not racists or the B.N.P. This is a peaceful non violent group.

Although the SDL claim not to be affiliated with the BNP, John Wilkinson, the administrator of their Facebook group, is a BNP member and campaigner[3]. The group carried out a demonstration in Glasgow on the 14-November-2008[4] and attempted a further protest in Edinburgh on 20 February 2010.

The SDL held their first demonstration in Glasgow on 14-November-2009. The group claimed they were protesting against the "Islamification" of Scotland[5]. According to a report in the Scotland on Sunday:

80 people briefly unfurled banners calling for the banning of the burqa, sang Rule Britannia and shouted "SDL" to shouts of "scum" and boos from shoppers[6].

Police said about 80 SDL protesters gathered in Cambridge Street, north of the city centre, and there were clashes. The SDL protesters, some with their faces partly covered with scarves, sang songs and chanted "SDL" as they held their demonstration[7].

The Sunday Mail described how:

The drunken mob left the Cambridge bar on Cambridge Street and moved to the city centre at noon where they were confronted by around 30 anti-fascist protesters shouting, "Nazi scum off our streets"[8].

Meanwhile, members of Scotland United gathered at Glasgow Green and marched to George Square, where they held a counter-demonstration backed by trade unions, politicians and faith groups.

Three days after the SDL's Glasgow demonstration plans were announced by the SDL to have a further gathering in Edinburgh[13]. Details were published on the groups Facebook page in early December giving the date of the 20-February-2010 for the protest.

The Scottish Defence League protest in Edinburgh was scheduled to take place on 20 February. Only 40 protesters attended the SDL protest, with a counter demonstration attracting around 2,000 people[14]. According to an email sent to SpinProfiles editors by SDL member Scott Clinton, "over 100 people were kept from getting to the demo spot and soom even turned away at airports etc it's not a matter of we failed to attract numbers the numbers were attracted and there just police stopped them from going any further [sic.]".[15]

According to a report in The Scotsman:

The group unfurled banners with slogans such as "Say no to fundamentalist Muslims" and sporadically raised chants, including "We want our country back" and "Muslim bombers off our streets". Despite attempts to break through the police cordon, they were contained in the pub, until two double-decker buses took them out of the city centre at about 4pm. At the formal Scotland United rally, which included a march from Princes Street Gardens to the Meadows, speakers said the SDL had failed to gain support, but warned against complacency. Justice Secretary Kenny MacAskill said: "Today is about making a stand against those who would seek to divide and saying to them that their views are not welcome." [16].

Three SDL protesters were arrested at the demonstration, 23-Year old Scott Buchan, from Aylesbury in Buckinghamshire, pled guilty to breach of the peace. Graeme Stevenson, 21 from Largs and David Parslow, 52 from Edinburgh both appeared in court the Monday after the demonstration, Stevenson was charged with "acting in a manner likely to incite violence and public disorder", and David Parslow admitted a breach of the peace charge for shouting and swearing outside the Edinburgh Central Mosque[17].

After the fiasco of the police abusing their powers and arresting and or/turning back innocent people trying to attend the Edinburgh demo, the Scottish Defence League will be holding a respectful vigil at Lockerbie on March 27th 2010. Details of coaches/transport from your regional organisers or via the Inner Circle. This is also a protest against the Traitor Kenny MacAskill who deny the SDL free speech and defended the release of the vermin responsible for the Lockerbie outrage. Kenny MacAskill told an emergency session of the Scottish parliament that it had been his “own decision” to free Abdelbaset al-Megrahi, adding that he stood by “the laws and values of Scotland”[18].

On the 10th March 2010 the SDL announced on their Webs.com site that the Lockerbie Vigil had already taken place. Their announce ment read as follows:

The SDL brought its Lockerbie vigil forward and yesterday a large amount of its members attended a moving vigil in memory of all those who perished in flight bombing. The reason the SDL changed the date was simple, we had not interest in bringing disorder and the red fascist circus to this lovely Scottish town. We wanted to remember those who were murdered with dignity and without left wing fascists charging around the town looking for confrontation. We did not want the likes if Mr McAskill the man who released one of the mass murderers responsible for the Lockerbie bombing, the publicity seeking Aemer Anwar or the rest oxygen thieves who have used other SDL events to try and grab some limelight for themselves and their lies decending on Lockerbie along with their state funded UAF thugs and the rest of the left wing fascist thugs bringing disorder to Lockerbie. We did not take SDL banners of flags, we stood in silence and respect, and a floral tribute was left as a mark of our great sorrow for those murdered in Lockerbie. The SDL have done nothing wrong, we were denied our basic human rights but the police in Edinburgh and the police admitted it was the Scottish government who pressured them to act in such a way. So whilst we have the sham of the SNP and other politicians claiming to stand against the SDL calling us fascists, we hope some day soon people will see them for what they are and everyone will be given the freedom they deserve in this country. Till then the SDL will not be silended and we will continue to try and have "peaceful" events. Just like yesterday in Lockerbie[19].

According to a report by Kieron Westbrook in the Dumfries Standard:

The Dumfries TUC described the groups decision not to visit Lockerbie on the 27th of March as “a victory for anti-racists”. Spokesman John Dennis said: “Dumfries TUC notes with satisfaction that the Scottish Defence League has abandoned its planned vigil in Lockerbie on March 27.

“We note that a small group of them claim to have sneaked quietly into Lockerbie on Saturday ... there is no place for racist thugs in Scotland.”

Some TUC members doubted the group had been in Lockerbie and these thoughts were echoed by Simon Asaf of United Against Fascism who said:

“It is very dangerous to assume they are not coming to protest. If they show up and we are not there, they will plant their flag in the town and come back every year. It would be disastrous.”

Dave Moxham of Scotland United argued that anti-racism protesters should keep out of Lockerbie. A police spokesman said: “We have had an indication that they have attended. But we have no proof one way or another as to whether this is the actually the case.”[20].

According to a report in The Herald one long-standing BNP member in Scotland said that the party and the SDL shared many members and supporters, adding that the threat of expulsion was merely “a publicity thing” designed to placate the media. He said:

I am a member of the BNP and a supporter of the Scottish Defence League. A lot of the supporters are the same.

On the threat of expulsion, he added:

That is a publicity thing. We both have the same views on radical Islam and we both don’t want Sharia law in Britain....We created our group [the SDL] to support what was happening down south with the English Defence League. I couldn’t say that the SDL was set up by BNP activists, but I was one of the early ones to support it[21].

One of the administrators of the SDL Facebook group is John Wilkinson who lists his political views on the site as BNP. Wilkinson can be seen on the site leafleting for the BNP in the 2009 European Elections. Wilkinson also appears on the leaked BNP members list which was posted on wikileaks[22].

Members of the SDL Facebook group include Adam Lloyd (Pictured Left) who is the BNP organiser for Bridgend in Wales[23].

The BNP have publicly denied any connection with the English Defence League and issued a press release distancing themselves from the EDL and the "confrontations they seek"[24].

Another member of the group Iain Brooks from Glasgow is also listed on the leaked BNP members list which appeared on Wikileaks[25].

Bobby Millar who runs the SDL Facebook group and Moonfruit website is a member of Facebook groups entitled “Stop calling me racist because I don’t like Islam”, “The government show Islam the door or we will end up in civil war”, “No more Immigrants, F*** off elsewhere England is full”, “BNP”, “BNP is the only way forward”, “we are all fed up with your DAMN ISLAM, leave us alone”, “Knight Nick Griffin”, “I Hate Police”, “For the BNP”, and “British and Proud, Stop Immigration”. He is also listed as a fan of the BNP’s Nick Griffin, Andrew Brons and Richard Barnbrook[26].

According to the Guardian the English Defence League was started by Tommy Robinson (a pseudonym), after a Muslim protest at the homecoming of the 2nd Battalion Royal Anglian Regiment in Luton in March 2009:

Only a handful of Muslim protesters disrupted the Anglians' homecoming parade, and they were drawn from an small extremist group that had already been ostracised by the mainstream Muslim community. However, it was enough for Robinson and others to set up a group called United People of Luton, and look across the country for support.[27]

The SDL facebook group has a military photograph with the caption "Tartan Army on Tour", presumably taken in Afghanistan. One of the groups administrators John Wilkinson a BNP member and activist also appears on his facebook page in military gear and appears to be serving abroad in another photograph.

Another SDL member Iain Brooks from Glasgow who appears on the Wikileaks leaked BNP members list from Glasgow appears on Facebook serving in the Royal Navy. Brooks is listed on his Facebook home page as serving on HMS Lancaster between 1999-2003. 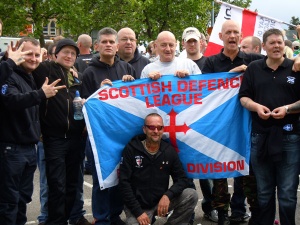