Parapolitics is used to describe either covert political activity that is hidden from the public or a complete (de facto) political system, typically comprising elements of the military and intelligence apparatus, hidden from the public; political actions of subterfuge, secrecy, and deceit; and is increasingly used in discussions on democracy to describe the behaviour of the deep state (i.e. coalitions of institutions and corporations who operate above or outside of the elected government).

The term parapolitics was first used by Professor Raghavan Iyer of Oxford University in his 1979 work Parapolitics: Toward the City of Man. It proposes a more all-encompassing conception than that of the traditional politics of stability, power and self-preservation.

In Iyer's conception, parapolitics is best understood as the activity of continually rethinking the foundations as well as the frontiers of political principles, systems and issues. In this sense, the ‘parapolitical’ transcends conventional politics while still being reflected in it. His dialectic of parapolitical engagement calls for establishing critical distance and a clear understanding the potential costs of commitment - mainly in terms of Establishment disapproval.

"Parapolitics signifies the imaginative application of seminal ideas vitalizing political theory and practice; the elaboration of fundamental principles into paradigms of relationships among persons and between civil means and humane ends; the quest for political understanding and action based upon expanding self-awareness; and the ever-receding perspective of ideals rooted in the ethics, metaphysics and psychology of self-transcendence."
Raghavan Iyer[1]

Peter Dale Scott employs the term "parapolitics," in a completely different manner, as a manifestation of "Deep Politics":

"...the investigation of parapolitics, which I defined (with the CIA in mind) as a 'system or practice of politics in which accountability is consciously diminished.'...I still see value in this definition and mode of analysis. But parapolitics as thus defined is itself too narrowly conscious and intentional... it describes at best only an intervening layer of the irrationality under our political culture's rational surface. Thus I now refer to parapolitics as only one manifestation of deep politics, all those political practices and arrangements, deliberate or not, which are usually repressed rather than acknowledged."

He defined it follows: 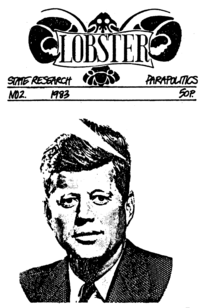 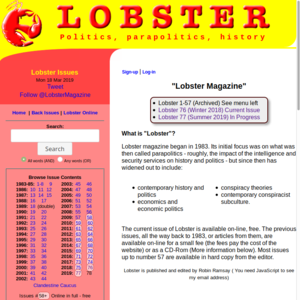 Founded in 1983, Lobster Magazine. The cover of the second issue sported an image of JFK and the words "state research" and "parapolitics". For some years it styled itself the "journal of parapolitics". The website as of 2019 declared "Politics, parapolitics, history".