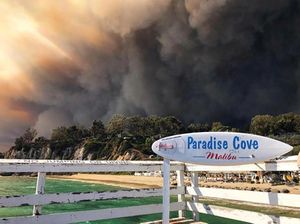 The author speculates that the fires have been a covert warfare experiment.

The 2018 California Fires, or Operation Paradise Falls were a false flag attack in California in 2017 and 2018.[citation needed] Ostensibly a covert action to test battlefield geoengineering techniques, the operation also obliterated press coverage of the centenary of the World War I Armistice on 11/11/18 with the complete destruction of the city of Paradise, California. The Northern California operations are believed to be run out of Beale Air Force Base, and the Southern California operations are believed to be coordinated at Naval Air Station Pt. Mugu.

In 2001, rolling blackouts caused by market manipulation by the California Independent Systems operator caused California to float billions in revenue bonds to Enron. This resulted in a $15-20 dollar surcharge on the electricity bill of every Californian. In 2019, this charge was set to expire. Due to insurance and similar expenses charged to the State's two largest investor owned utilities (Pacific Gas & Electric and Southern California Edison), the fires effectively replaced the surcharge.

Phase I of Paradise Falls took place in October 9, 2017 with the Tubbs fire in the North Bay communities of Santa Rosa and Napa, California. Investigating the fires - especially the Tubbs fire, was Petaluma fire investigator John Lord[1]. Immediately, the nonstandard burn patterns of the blazes jumped out. Local fire districts had never seen such simultaneous fires burn out and they could not explain their spread or ferocity.

Local media reported the fires were caused by "Diablo Winds" akin to the Southern California "Santa Ana Winds." A review of Newspapers.com articles scanned over the course of a century showed this term was made up in 2017. Geographically, there is no location with high desert and high pressure conditions that could create a phenomenon similar to that experienced in Southern California.

In 2008, the Civil Grand Jury of Butte County stated insufficient emergency routes existed in the city of Paradise, California. The city sits in a granite canyon of the Upper Sierra Nevada. The risk is not so much fires as much as it is from eventual eruption of Mt. Lassen. In 1915, the volcano sent tremendous amounts of ash down the canyon in which the city is located.

In the weeks prior to the Paradise Fire, numerous Los Angeles Times reporters were observed in the city photographing buildings. Also, a white powder started to appear over roofs, according to some residents. In the years prior, a number of individuals had also moved to Paradise, CA, who did not seem to work in the local community.[citation needed] 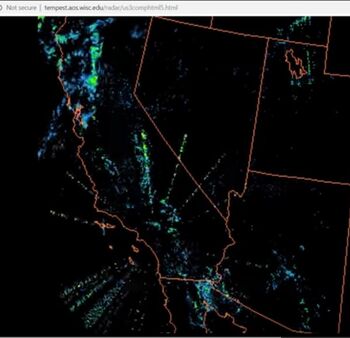 The Hill Fire forced the evacuation of a classified radar station at NAS Pt. Mugu[2] Simultaneous to the outbreak of the fires, a radar anomaly was observed by the University of Wisconsin.

A local, Jane Tande observed military preparation in the area for months in advance of the Hill Fire.[citation needed]

Moreover, the Hill Fire broke out at the location of a major local landmark named "Paradise Falls" In Wildwood Park between Camarillo and Thousand Oaks. Covert California speculated the Borderline Shooting on 11/7 was a way to close the main artery, US 101, in advance of setting the fire.

One aspect to the fires was the normalization of urban facial masks, a trend created and inflamed by local media [3]. It is speculated this was to normalize the wearing of masks in public for intelligence agency instigated protests around the world and may have been sold to the intelligence community as a means of testing civilian resources for the distribution of nuclear fallout masks. Covert California noted surveillance activity outside the Twitter Headquarters in San Francisco such as "clipboard commandos" taking tallies of individuals walking down Market street wearing facial masks.

Each event in the greater fire season corresponded to an event in an exhibition at the San Francisco Arts Commission called "Fahrenheit, 10,000." For example, the day after the Gubernatorial Election involving Gavin Newsom, the exhibition featured "Young Sun: Wildfires." Advertisements for this as well as the film "Bumblebee" featuring people wearing facial masks by the Golden Gate Bridge appeared all over San Francisco during the height of the fires in November 2018.

During the fires, Gavin Newsom signed several proclamations as "Acting Governor" of California, but there was no constitutional basis for him to hold such a position. For this reason, many have speculated that the State Constitution was suspended in order to make the torching of a california city by the US Navy technically legal.