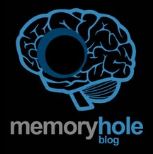 
Member of: PropOrNot/List
Founder/Owner: James F. Tracy (A media scholar)
In its own words:
"Memory Hole Blog is a forum for news, criticism and commentary on sociopolitical issues and phenomena overlooked or misreported by mainstream media. Such neglected concerns are likewise often omitted from or distorted in popular consciousness and memory.

The site is maintained by James F. Tracy, an Associate Professor of Journalism and Media Studies at Florida Atlantic University in Boca Raton from 2002 to 2015. Tracy was officially terminated on January 8, 2016 from his tenured position at FAU, ostensibly for questioning university policy and failing to file paperwork in a timely fashion...

Tracy hosts the weekly interview program, Real Politik on Truth Frequency Radio and is an affiliate of Project Censored."

The website draws its name from the concept of the "memory hole" introduced by George Orwell in 1984.