He joined the CIA. In October 2004, he was appointed Executive Director by then-director Porter Goss over the objections of other CIA staff who said he had a reputation as a hard-drinking womanizer.[1]

He resigned on May 8, 2006 amid corruption charges, while working out even larger frauds, reportedly to subcontract a huge clandestine plane network for whatever needs the CIA had.[2]

On February 13, 2007, he was charged with fraud and other offenses after an investigation into Randy "Duke" Cunningham who had admitted taking bribes from Brent Wilkes, a defense contractor. This investigation led them to Foggo.

Foggo pled guilty in September 2007 to a single count of wire fraud for "depriving the United States and its citizens of their right to his honest services."[3] In exchange, prosecutors dropped 27 other charges against him, including money laundering and conspiracy.[4][2]

He was later convicted of honest services fraud in the steering government contracts to a close college friend of his, Brent Wilkes. Prosecutors said he "had a history of misconduct spanning two decades."[5] In their 2007 indictment of Foggo, prosecutors said he steered several business deals, including one worth $132 million, to companies run by a childhood friend, who had promised Foggo a job after he retired from the agency and lavished him with gifts, expensive meals, visits with prostitutes and vacations. In one email from Foggo quoted in the indictment, the former top official promised his friend, Brent Wilkes, he would apply "grease" to move a contract deal along.[6]

He was sentenced to 37 months in prison. 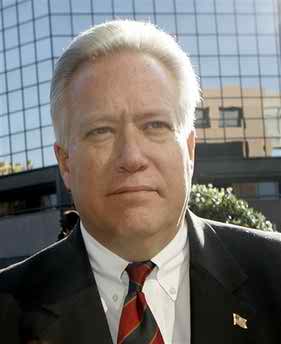 +
Has image2
File:Kyle Foggo.jpg +
Has noRatings
0 +
Has objectClass
Person +
Has objectClass2
Person +
Has posting
Executive Director of the Central Intelligence Agency +
Has revisionSize
3,477 +
Has revisionUser
Robin +
Has wikipediaPage
https://en.wikipedia.org/wiki/Kyle Foggo +
Has wikipediaPage2
https://en.wikipedia.org/wiki/Kyle_Foggo +
Is not stub
true +
Has subobject"Has subobject" is a predefined property representing a container construct and is provided by Semantic MediaWiki.
Kyle Foggo +