Closely associated with the Nationalist side during and after the Spanish Civil War, and with a covert collaboration with the British, March was the wealthiest man in Spain and the sixth richest in the world.[1] Throughout his life, he accumulated many labels, most notably "the last pirate of the Mediterranean". At his death in 1961, Time called him "the Iberian Croesus".[2]

Born into a humble family of peasants in Mallorca, he was expelled from school at an early age, and began helping his father with his pig farming business while smuggling tobacco from Spanish Morocco. During the Mediterranean theatre of World War I, March was involved in an international affair after he gave supplies to a fleet of submarines of the Austro-Hungarian empire in his island of Cabrera. This action cost him the expropriation of the island by the Government of Spain acting on behalf of Winston Churchill, at the time First Lord of the Admiralty. In 1916, he founded Trasmediterránea, an important shipping company that strengthened March's naval outreach. He gained political protection from Primo de Rivera and established Banca March to finance part of his business ventures, including Franco's coup d'état and most of the Nationalist effort. For a short period of the Second Spanish Republic, he was jailed due to financial irregularities and illegal activities, including tobacco and arms trafficking. He managed to escape prison by bribing a Civil Guard and fleeing to Gibraltar.[3]

In 1955, he set up his eponymous foundation of philanthropy and sciences, similar to the Rockefeller or Carnegie foundations. Around the same time, an elderly March uttered his famous "I am so rich, that I do not even know how rich I am".[4] He died in March 1961 from sustained injuries caused by a road accident in Madrid.

The March family under his patriarchy had a strong influence in the financial, social and cultural aspects of European affairs in the 20th century, where it played an almost equally important role as the Rothschild family.[5] Today, the Marches are among the richest in Spain, reported to be worth over US$5 billion.[6]

Juan March Ordinas was born in Santa Margalida on the island of Majorca. As a young man, he smuggled tobacco from North Africa into Spain. During World War I, he supplied goods to both sides, evading the Allied blockade of the Central Powers, and the German U-boats.

His power and influence increased under different Spanish governments during the reign of King Alfonso XIII. In 1926 he created the Banca March in Majorca.

When the monarchy was replaced by the Second Spanish Republic in 1931, March lost his influence, and was convicted and imprisoned for his illegal dealings. He escaped from prison, and fled to Gibraltar where his influence with the British government protected him against extradition.

March was an important backer of the 1936 military rebellion against the Republic which led to the Civil War. He arranged Franco's flight from the Canary Islands to Spanish Morocco, brought the colonial troops there into the rebellion, and personally financed the Italian airlift of those troops to southern Spain.

With the Nationalist victory in 1939, March regained all his former influence and more, and was greatly favored in Francoist Spain. During World War II, the Allies employed him to keep Spain from joining the Axis. According to recently declassified documents, in 1941 the British government gave him US$10,000,000 with which to influence the top Spanish generals.

In 1944, March became a supporter of the claim of Don Juan de Borbón, who had turned pro-Allies, to the Spanish throne. He also owned newspapers and funded political parties.

After World War II, he was the seventh-richest man in the world. In 1955, he established the Juan March Foundation to support the arts, music, and social sciences.

Bartolome March amassed one of the greatest 20th century art collections. At a young age, he started buying books and manuscripts. Later, he collected 18th century French furniture, and Baroque, Impressionist, Modern, and contemporary art, including works of Murillo, Goya, Velázquez, Picasso, Monet, Van Gogh, Miró, Kandinsky, Brâncuși, Léger, Dalí, Fontana, Rothko, Klein, Francis Bacon, and many others. The March family collection is one of the most important in the world, and is reported to be worth over 1 billion USD.

The March family still is one of the richest families in Spain (after Amancio Ortega from Zara). They live between Madrid, Majorca and Gstaad. The Casa March, an imposing villa overlooking Cala Ratjada, Majorca and surrounded by an expansive sculpture garden, was built by Juan March in 1915; the gardens are open to guided tours.

March was widely known for involvement in lucrative illegal activities, bribery, political influence, and bending the law whenever he saw a benefit. This was exemplified in his 1948 takeover of the Barcelona Traction, Light, and Power Company (BTLP) for a small fraction of its real worth.

BTLP was a utility company which provided power and streetcar services in Barcelona; originally incorporated in Canada, it was mostly owned by Belgian investors. BTLP had come through the Spanish Civil War largely undamaged, and was quite profitable. Its assets were about £10,000,000 (about $500 million in 2010). However, for the convenience of some of its foreign investors, BTLP had issued some bonds denominated in pounds, and the interest on these bonds was payable in pounds. The Spanish government had imposed currency restrictions: BTLP was unable to exchange its Spanish pesetas for pounds, and so could not pay the interest.

This was not viewed with any great alarm by the bondholders; BTLP had plenty of pesetas and would pay the interest arrears whenever the currency restrictions were relaxed.

However, March sensed an opportunity. Agents secretly acting for him quietly bought up the bonds (about £500,000). Then in February 1948, they appeared in a Spanish court, asserted that BTLP was in default on the bonds, and demanded immediate relief. The judge agreed and awarded ownership of all BTLP's assets to them (in fact to March). BTLP's foreign investors appealed, but got no relief from Spanish courts. The Belgian government appealed to the International Court of Justice but to no avail: the final resolution coming in 1970, eight years after March's death.

There is an example of March's worldwide notoriety in John D. MacDonald's 1962 novel, The Girl, the Gold Watch & Everything. At one point, one of the chief villains of the story complains of the difficulties of operating in the United States, where the police are honest and the press interferes. He remarks:

It was always better elsewhere, particularly in Spain, where Juan March would help with the arrangements.

Juan March Ordinas is commemorated in the scientific name of a species of Spanish lizard, Algyroides marchi.[7] The Fundación Juan March is today one of the most important foundations dedicated to the development of cultural and scientific enhancement in Spain. 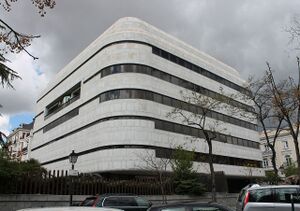 This page imported content from Wikipedia on 22.11.2021.
Wikipedia is not affiliated with Wikispooks.   Original page source here
Retrieved from "https://wikispooks.com/w/index.php?title=Juan_March&oldid=230408"
Categories: