The Helsinki University of Technology (TKK; Template:Lang-fi; Template:Lang-sv) was a technical university in Finland. It was located in Otaniemi, Espoo in the metropolitan area of Greater Helsinki. The university was founded in 1849 by Grand Duke of Finland, Emperor Nicholas I and received university status in 1908. It moved from Helsinki to Otaniemi campus area in 1966. It was merged into Aalto University in 2010 and briefly had the name Aalto University School of Science and Technology before being split into four schools in 2011.

Much of the university's Otaniemi campus was designed by Alvar Aalto. 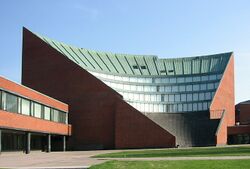 Alvar Aalto's landmark auditorium of the main building. The amphitheatre-like structure contains the main auditoriums, while its exterior can be used for plays and other activities.

The main library of the university, designed by Alvar Aalto and built in 1970.

In 1849, TKK was established in Helsinki by the decree of the Russian Emperor Nicholas I, Grand Duke of Finland as a "manufacture and handicraft school", with the name Helsingin teknillinen reaalikoulu/Helsingfors tekniska realskola, along with two other similar schools, situated in Vaasa and Turku. In 1872, the school's name was changed to Polyteknillinen koulu/Polytekniska skolan ("Polytechnical School") and in 1878, to Polyteknillinen opisto/Polytekniska institutet ("Polytechnical Institute"), while the two other manufacture and handiwork schools were demoted to institutions of lower level. As the proportion of matriculation diploma holders in the student intake gradually increased, the school gained more social respectability. In 1908, TKK was given university status along with its present name, thus becoming the second university to be founded in Finland. In 1955, building of the new campus area started with the housing village. In 1966, TKK moved from Helsinki to the new campus in Otaniemi, Espoo.

Researchers at TKK have achieved notability in, among other things, low temperature physics (holding the current world record for the lowest temperature achieved), the development of devices and methods for magnetoencephalography, mobile communications, wood processing, and neural networks, with professor Teuvo Kohonen initiating research in self-organizing maps. Additionally, the first commercialised total synthesis, the synthesis of camphor, was invented by Gustaf Komppa, the first professor of chemistry at TKK[1] and the Nobel laureate (chemistry, 1945) Artturi Virtanen held a professorship in biochemistry at TKK. More recently, the university has notably invested in the research of nanotechnology, operating the largest cleanroom facility in Northern Europe[2] and of the largest microscopy clusters in Europe.[3]

The Nokia Research Center has operated a "lablet" on university premises since 2008, in order to establish joint research programs and daily interaction between Nokia and university researchers, who would share the same facilities.