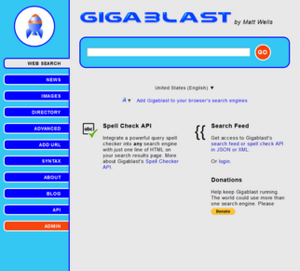 As an open source engine, Gigablast is not expected to differentially treat any domain of search topic. As of January 2018, the ISGP site was hit #9 hit on Gigablast for the search term "Dutroux affair" (and was also in the top 10 for Yahoo[2], Bing[3], DuckDuckGo[4], Ecosia[5] and Yandex[6]). By contrast Google, StartPage and Ask.com all appeared to have blocked the domain for that search term - not listing it in the top 100 hits.

Gigablast did not list a page from this site on the search term "Wikispooks 7th floor group"[7], suggesting that the page may not have been indexed. Ask.com[8], Bing[9], Google[10] and Yahoo[11] listed it as #1.

Announcing the closure of Findx.com, a search engine which was based on Gigablast, Brian Rasmusson issued the following statement in August 2019 about Gigablast:

“The search engine was based on the Gigablast open-source search engine by Matt Wells. Normally I endorse the “If you don’t have something nice to say, don’t say anything at all” saying, but… That was one of the biggest mistakes we made. Looking back, that codebase was outdated and we ended up putting way too much time and money into bug-fixing and optimizing it instead of adding new features. It was not as flexible or feature rich as it needed to be, to be the foundation of a modern search engine. We came close on a number of occasions to making a deal with Matt to develop it further, but every time he ended up disappearing. We will leave our version available for the foreseeable future, but our recommendation is clear – DO NOT USE IT – not ours, and especially not the original. Start somewhere else if you want to build a new search engine. Do not base your project on a one-man project, no matter how confidently it is “sold” to you.”
(August 2019)  [12]
Emphasis in original