Fusion centers are a reflection of the "war on terror". Ben Harbisher speaks of the "Fusion Intelligence Complex".[1]

Fusion Centers are to facilitate the sharing of information to reduce that danger of "terrorism", many democratic countries have been developing them as part of the "war on terror".

Fusion centers are demonstrably ineffective at fighting "terrorism", and yet the UK/US model has been repeated in several other countries worldwide. This apparent paradox is resolved by noting the hypocrisy of the "war on terror". Fusion centers, like TWOT, facilitate deep state control by bypassing existing governmental structures. Their often nebulous nature facilitates plausible deniability and easier dodging of legal responsibilities such as FOIA requests.[2]

Ineffectiveness of their stated aim

A two-year investigation by the US senate found that "the fusion centers often produced irrelevant, useless or inappropriate intelligence reporting to DHS, and many produced no intelligence reporting whatsoever." [3][4] The report also said that in some cases the fusion centers violated civil liberties or privacy.[5] In the light of this report, their continued expansion deserves serious reflection.

Since 2006, the US federal government and the Department of Homeland Security have helped states and major cities set up a network of 58 fusion centers. Originally created to improve the sharing of “anti-terrorism intelligence” among state, local and federal law enforcement agencies, their mission was quickly expanded to include “the collection and analysis of information from law enforcement agencies, the private sector and the intelligence community” on “all crimes and all hazards.”[6]

The ACLU writes that "for many [Fusion Centers] the scope of their mission has quickly expanded - with the support and encouragement of the federal government - to cover "all crimes and all hazards." The types of information they seek for analysis has also broadened over time to include not just criminal intelligence, but public and private sector data, and participation in these centers has grown to include not just law enforcement, but other government entities, the military and even select members of the private sector."[7]

The Reich Main Security Office (1939-1945) had the same functions as a modern fusion center. The organization's stated duty was to fight all "enemies of the Reich" inside and outside the borders of Nazi Germany. The creation of the RSHA represented the formalization, at the top level, of the relationship under which the SD (SS Security Service) served as the intelligence agency for the security police. A similar coordination existed in the local offices. Within Germany and areas which were incorporated within the Reich for the purpose of civil administration, local offices of the Gestapo, criminal police, and SD were formally separate, but they were subject to coordination by inspectors of the security police and SD on the staffs of the local higher SS and police leaders. One of the principal functions of the local SD units was to serve as the intelligence agency for the local Gestapo units. In the occupied territories, the formal relationship between local units of the Gestapo, criminal police, and SD was slightly closer. Reinhard Heydrich remained the RSHA chief from its foundation in 1939 until his assassination in 1942. In January 1943 Himmler delegated the office to SS-Obergruppenführer and General of Police Ernst Kaltenbrunner, who headed the RSHA until the end of World War II.

The Phoenix program established Intelligence Operations and Coordinating Centers in the provinces and districts (PIOCCs and DIOCCs) of South Vietnam, in similar ways to how the Department of Homeland Security has created “fusion centers” in every state and major city across the United States. The fusion centers coordinate all the agencies in an area exactly like IOCCs did in Vietnam; systematized and computerized, they coordinate contributing intelligence analysts and operating units. It’s the same highly bureaucratized system for dispensing with anything and anyone who can’t be assimilated. [8] 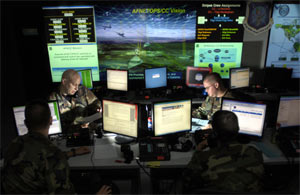