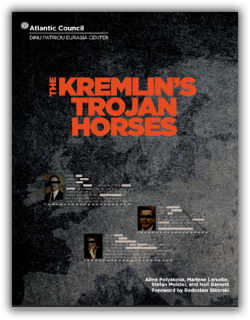 A remarkable piece of neo-McCarthyist claptrap that identifies every populist political movement in Europe a secret agent of Russian influence on the continent, working in the interest of evil-arch-overlord-of-everything, Adolf Beelzebub Putin. The pamphlet not only points the finger of accusation at the usual suspects in the traditional far-right spaces (Le Pen’s National Front, PEGIDA, etc.) but also at Jeremy Corbyn’s Labor party and, bizarrely, former German chancellor Gerhard Schröder. [1]

November 2016 publication of The Atlantic Council