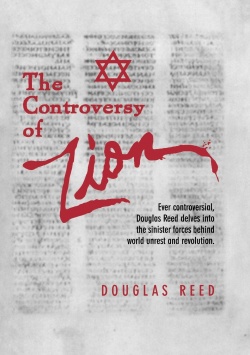 Wikispooks Comment One of the best and most comprehensive surveys of Judaic history from its origins to its 'revolutionary Zionism' manifestations in the tragedies of the late 19th and 20th centuries. In the aftermath of World War II, it's contents became progressively more politically incorrect, to the point of being effectively criminalised in much of Western Europe. It is one of a handful of Must-Reads for anyone seeking to understand the role of Zionism in the modern world.

★ Start a Discussion about this document
The Controversy of Zion

A Preface by Ivor Benson

The Author: In Europe during the years immediately before and after World War II the name of Douglas Reed was on everyone's lips; his books were being sold by scores of thousand, and he was known with intimate familiarity throughout the English-speaking world by a vast army of readers and admirers. Former London Times correspondent in Central Europe, he had won great fame with books like Insanity Fair, Disgrace Abounding, Lest We Regret, Somewhere South of Suez, Far and Wide and several others, each amplifying a hundredfold the scope available to him as one of the world's leading foreign correspondents.

The disappearance into almost total oblivion of Douglas Reed and all his works was a change that could not have been wrought by time alone; indeed, the correctness of his interpretation of the unfolding history of the times found some confirmation in what happened to him when at the height of his powers.

After 1951, with the publication of Far and Wide, in which he set the history of the United States of America into the context of all he had learned in Europe of the politics of the world, Reed found himself banished from the bookstands, all publishers' doors closed to him, and those books already published liable to be withdrawn from library shelves and "lost", never to be replaced.

His public career as a writer now apparently at an end, Reed was at last free to undertake a great task for which all that had gone before was but a kind of preparation and education that no university could provide and which only the fortunate and gifted few could fully use - his years as a foreign correspondent, his travels in Europe and America, his conversations and contacts with the great political leaders of his day, plus his eager absorption through reading and observation of all that was best in European culture.

Experiences which other men might have accepted as defeat, served only to focus Douglas Reed's powers on what was to be his most important undertaking - that of researching and retelling the story of the last 2000 years and more in such a way as to render intelligible much of modern history which for the masses remains in our time steeped in darkness and closely guarded by the terrors of an invisible system of censorship.

The Book: Commencing in 1951, Douglas Reed spent more than three years - much of this time separated from his wife and young family - working in the New York Central Library, or tapping away at his typewriter in spartan lodgings in New York or Montreal. With workmanlike zeal, the book was rewritten, all 300,000 words of it, and the Epilogue only added in 1956.

The story of the book itself - the unusual circumstances in which it was written, and how the manuscript, after having remained hidden for more than 20 years, came to light and was at last made available for publication - is part of the history of our century, throwing some light on a struggle of which the multitudes know nothing: that conducted relentlessly and unceasingly on the battleground of the human mind.

It needed some unusual source of spiritual power and motivation to bring to completion so big a book involving so much laborious research and cross-checking, a book, moreover, which seemed to have little or no chance of being published in the author's lifetime.

Although there is correspondence to show that the title was briefly discussed with one publisher, the manuscript was never submitted but remained for 22 years stowed away in three zippered files on top of a wardrobe in Reed's home in Durban, South Africa.

Relaxed and at peace with himself in the knowledge that he had carried his great enterprise as far as was possible in the circumstances of the times, Douglas Reed patiently accepted his forced retirement as journalist and writer, put behind him all that belonged to the past and adjusted himself cheerfully to a different mode of existence, in which most of his new-found friends and acquaintances, charmed by his lively mind and rich sense of humour, remained for years wholly unaware that this was indeed the Douglas Reed of literary fame.

Of this he was sure, whether or not it would happen in his lifetime, there would come a time when circumstances would permit, and the means be found, to communicate to the world his message of history rewritten, and the central message of Christianity restated.Interpretation: For the rest, The Controversy of Zion, can be left to speak for itself; indeed, it is a work of revisionist history and religious exposition the central message of which is revealed in almost every page, understanding and compassionate of people but severely critical of the inordinate and dangerous ambitions of their leaders.

In the final chapter, under the heading the Climacteric, Douglas Reed remarks that if he could have planned it all when he began writing his book in 1949, he could not have chosen a better moment than the last months of 1956 to review the long history of Talmudic Zionism and re-examine it against the background of what was still happening on the stage of world politics.

For 1956 was the year of another American presidential election in which, once again, the Zionists demonstrated their decisive power to influence Western politics; it was the year in which the nations of the West stood by as helpless spectators as Soviet forces were used to crush a spontaneous revolt and re-install a Jewish-Communist regime in Hungary; and it was the year in which Britain and France, under Zionist pressure, were drawn into the disastrous fiasco of an attempt to capture the Suez Canal, an adventure from which, once again, Israel alone gained any advantage.

Everything that has happened since Reed wrote those last sentences in 1956 has continued to endorse the correctness of his interpretation of more than 2000 years of troubled history.

The Middle East has remained an area of intense political activity and of the maximum falsification of news and suppression of genuine debate, and it was only the few with some knowledge of the role of Talmudic Zionism and Communism who could have had any chance of solving the problem of successive events of major importance, like the so-called Six Day War in 1967 and the massive Israeli invasion of Lebanon in 1982.

Those who have read The Controversy of Zion will not be surprised to learn that there were clear signs of collusion between the Soviet Union and Israel in precipitating the Israeli attack on Egypt, for it was only because Colonel Nasser had been warned by the Kremlin bosses that Israel was about to attack Egypt's ally Syria that he moved nearly all his armed forces to his country' s northern border, where they fell an easy prey to Israel's vastly superior army.

It seemed as if nothing had changed when in 1982 Israel launched a massive and most ruthless attack on Southern Lebanon, ostensibly for the purpose of rooting out the Palestine Liberation Organisation, but actually in furtherance of an expansionist policy about which Jewish leaders have always been remarkably frank.

By this time, however, the pro-Zionist mythology generated by Western politicians and media in which Israel was always represented as a tiny and virtuous nation in constant need of help and protection, was obviously beginning to lose much of its plausibility, so that few were surprised when the British Institute of Strategic Studies announced that Israel could now be regarded as fourth in the world as a military power, after the USA, the Soviet Union and the People's Republic of China - well ahead of nations like Britain and France.

More deeply significant was the reaction of the Jewish people, both in Israel and abroad, to an apparent triumph of Zionist arms in Lebanon. While Western politicians and media remained timorously restrained in their comment, even after news of the massacre of an estimated 1500 men, women and children in two Beirut refugee camps, 350,000 of the residents of Tel Aviv staged a public demonstration against their government and there were reports in the Jewish press that controversy over the Lebanese war had rocked the Israel army and affected all ranks.

Of this, too, Douglas Reed seems to have had some presentiment, for among the last words in his book are these: "I believe the Jews of the world are equally beginning to see the error of revolutionary Zionism, the twin of the other destructive movement, and, as this century ends, will at last decide to seek involvement in common mankind" .