In her writings, McBean postulates the existence of a causal connection between the small pox vaccination according to Jenner and the death of a patient due to an infection with tuberculosis: "[...] was declared immune to smallpox but he too, died of tuberculosis at the age of 20." McBean also views cancer as a result of previous vaccination.

The Spanish Flu Epidemic of 1918 was caused by vaccinations as well as subsequently administered medications, which only extended the duration of infection, according to McBean. As proof she claims that she had survived the Spanish Flu as a child because she and her family did not receive any vaccinations in circulation at that time. No vaccine against influenza existed in 1918. The cause of influenza had not been discovered. It was not known that a virus was to be held accountable. Andrewes, Smith and Laidlaw of the National Institute for Medical Research were able to detect the cause in 1933 and the first vaccine became available in 1944/45. McBean states the Spanish flu was not really flu but rather was caused by the interplay of the 25 vaccines given out to soldiers. She also states disease was further propagated into the general population when vaccines were left over after the war and the need to use the stockpiles caused the creation of reasons to do so. She reports people were told they would get diseases like typhoid, diphtheria, and small pox from returning soldiers. However, McBean fails to mention which vaccines were responsible and how she manages to add those few available immmunizations up to 25.

McBean accounts: All the doctors and people who were living at the time of the 1918 Spanish Influenza epidemic say it was the most terrible disease the world has ever had. [...] The disease had the characteristics of the black death added to typhoid, diphtheria, pneumonia, smallpox, paralysis and all the diseases the people had been vaccinated with immediately following World War 1. Practically the entire population had been injected — "seeded" with a dozen or more diseases — or toxic serums. [...] As far as I could find out, the flu hit only the vaccinated. Those who had refused the shots escaped the flu. My family had refused all the vaccinations so we remained well all the time. [...] It has been said that the 1918 flu epidemic killed 20,000,000 people throughout the world. But, actually, the doctors killed them with their crude and deadly treatments and drugs.[1]

McBean's layperson's perspective on health and medical topics can only be considered as "non-professional as her description of a vaccination as an "infusion of poison injected into the blood stream" in the preface to her book "The Poisoned Needle" demonstrates".

These elusive little nothings have fooled the people and served the uses of doctors but have vanished into theory when subjected to the clear light of scientific investigation.

These mythical anti-bodies are said to make war on disease germs. But germs are not the cause of disease in the first place and are useful wherever they are found in nature [...]

Disease is not something to be cured; it is a cure.

These diseases [measles, chicken-pox, mumps, scarlet fever] are not contagious but are merely cleansing measures of the body[...] 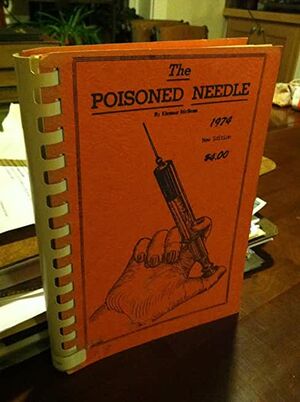 This page imported content from Deletionpedia on 16 December 2021.
Deletionpedia is not affiliated with Wikispooks.   Original page source here