Despite the Obama administration’s claimed “high confidence” regarding Syrian government guilt over the 21 August 2013 chemical attack near Damascus, a dozen former U.S. military and intelligence officials are telling the President that they are picking up information that undercuts the Official Story.

"CIA Director John Brennan is perpetrating a pre-Iraq-War-type fraud on members of Congress, the media, the public – and perhaps even you"

U.S. Military and Intel Officials to Obama: “Assad NOT Responsible for Chemical Attack” 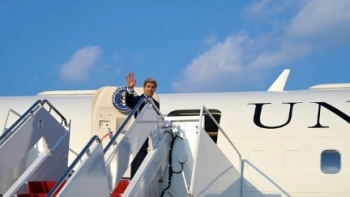 Secretary of State John Kerry departs for a 6 September 2013 trip to Europe, planning to meet with officials to discuss the Syrian crisis and other issues. (State Department photo)

MEMORANDUM FOR: The President
FROM: Veteran Intelligence Professionals for Sanity (VIPS)
SUBJECT: Is Syria a Trap?
Precedence: IMMEDIATE

We regret to inform you that some of our former co-workers are telling us, categorically, that contrary to the claims of your administration, the most reliable intelligence shows that Bashar al-Assad was NOT responsible for the chemical incident that killed and injured Syrian civilians on August 21, and that British intelligence officials also know this. In writing this brief report, we choose to assume that you have not been fully informed because your advisers decided to afford you the opportunity for what is commonly known as “plausible denial.”

We have been down this road before – with President George W. Bush, to whom we addressed our first VIPS memorandum immediately after Colin Powell’s 5 February 2003 U.N. speech, in which he peddled fraudulent “intelligence” to support attacking Iraq. Then, also, we chose to give President Bush the benefit of the doubt, thinking he was being misled – or, at the least, very poorly advised.

Secretary of State John Kerry departs for a Sept. 6 trip to Europe where he plans to meet with officials to discuss the Syrian crisis and other issues. (State Department photo)

The fraudulent nature of Powell’s speech was a no-brainer. And so, that very afternoon we strongly urged your predecessor to “widen the discussion beyond … the circle of those advisers clearly bent on a war for which we see no compelling reason and from which we believe the unintended consequences are likely to be catastrophic.” We offer you the same advice today.

Our sources confirm that a chemical incident of some sort did cause fatalities and injuries on August 21 in a suburb of Damascus. They insist, however, that the incident was not the result of an attack by the Syrian Army using military-grade chemical weapons from its arsenal. That is the most salient fact, according to CIA officers working on the Syria issue. They tell us that CIA Director John Brennan is perpetrating a pre-Iraq-War-type fraud on members of Congress, the media, the public – and perhaps even you.

We have observed John Brennan closely over recent years and, sadly, we find what our former colleagues are now telling us easy to believe. Sadder still, this goes in spades for those of us who have worked with him personally; we give him zero credence. And that goes, as well, for his titular boss, Director of National Intelligence James Clapper, who has admitted he gave “clearly erroneous” sworn testimony to Congress denying NSA eavesdropping on Americans.

That Secretary of State John Kerry would invoke Clapper’s name this week in Congressional testimony, in an apparent attempt to enhance the credibility of the four-page “Government Assessment” strikes us as odd. The more so, since it was, for some unexplained reason, not Clapper but the White House that released the “assessment.”

This is not a fine point. We know how these things are done. Although the “Government Assessment” is being sold to the media as an “intelligence summary,” it is a political, not an intelligence document. The drafters, massagers, and fixers avoided presenting essential detail. Moreover, they conceded upfront that, though they pinned “high confidence” on the assessment, it still fell “short of confirmation.”

Déjà Fraud: This brings a flashback to the famous Downing Street Minutes of July 23, 2002, on Iraq, The minutes record the Richard Dearlove, then head of British intelligence, reporting to Prime Minister Tony Blair and other senior officials that President Bush had decided to remove Saddam Hussein through military action that would be “justified by the conjunction of terrorism and WMD.” Dearlove had gotten the word from then-CIA Director George Tenet]] whom he visited at CIA headquarters on July 20.

The discussion that followed centered on the ephemeral nature of the evidence, prompting Dearlove to explain: “But the intelligence and facts were being fixed around the policy.” We are concerned that this is precisely what has happened with the “intelligence” on Syria.

There is a growing body of evidence from numerous sources in the Middle East — mostly affiliated with the Syrian opposition and its supporters — providing a strong circumstantial case that the 21 August chemical incident was a pre-planned provocation by the Syrian opposition and its Saudi and Turkish supporters. The aim is reported to have been to create the kind of incident that would bring the United States into the war.

According to some reports, canisters containing chemical agent were brought into a suburb of Damascus, where they were then opened. Some people in the immediate vicinity died; others were injured.

We are unaware of any reliable evidence that a Syrian military rocket capable of carrying a chemical agent was fired into the area. In fact, we are aware of no reliable physical evidence to support the claim that this was a result of a strike by a Syrian military unit with expertise in chemical weapons.

In addition, we have learned that on 13-14 August 2013, Western-sponsored opposition forces in Turkey started advance preparations for a major, irregular military surge. Initial meetings between senior opposition military commanders and Qatari, Turkish and U.S. intelligence officials took place at the converted Turkish military garrison in Antakya, Hatay Province, now used as the command center and headquarters of the Free Syrian Army (FSA) and their foreign sponsors.

Senior opposition commanders who came from Istanbul pre-briefed the regional commanders on an imminent escalation in the fighting due to “a war-changing development,” which, in turn, would lead to a U.S.-led bombing of Syria.

At operations coordinating meetings at Antakya, attended by senior Turkish, Qatari and U.S. intelligence officials as well as senior commanders of the Syrian opposition, the Syrians were told that the bombing would start in a few days. Opposition leaders were ordered to prepare their forces quickly to exploit the U.S. bombing, march into Damascus, and remove the Bashar al-Assad government.

That the various groups trying to overthrow Syrian President Bashar al-Assad have ample incentive to get the U.S. more deeply involved in support of that effort is clear. Until now, it has not been quite as clear that the Netanyahu government in Israel has equally powerful incentive to get Washington more deeply engaged in yet another war in the area. But with outspoken urging coming from Israel and those Americans who lobby for Israeli interests, this priority Israeli objective is becoming crystal clear.

Reporter Judi Rudoren, writing from Jerusalem in an important article in Friday’s New York Times addresses Israeli motivation in an uncommonly candid way. Her article, titled “Israel Backs Limited Strike Against Syria,” notes that the Israelis have argued, quietly, that the best outcome for Syria’s two-and-a-half-year-old civil war, at least for the moment, is no outcome. Rudoren continues:

“For Jerusalem, the status quo, horrific as it may be from a humanitarian perspective, seems preferable to either a victory by Mr. Assad’s government and his Iranian backers or a strengthening of rebel groups, increasingly dominated by Sunni jihadis.
“‘This is a playoff situation in which you need both teams to lose, but at least you don’t want one to win — we’ll settle for a tie,’ said Alon Pinkas, a former Israeli consul general in New York. ‘Let them both bleed, hemorrhage to death: that’s the strategic thinking here. As long as this lingers, there’s no real threat from Syria.’” [1]

We think this is the way Israel’s current leaders look at the situation in Syria, and that deeper U.S. involvement – albeit, initially, by “limited” military strikes – is likely to ensure that there is no early resolution of the conflict in Syria. The longer Sunni and Shia are at each other’s throats in Syria and in the wider region, the safer Israel calculates that it is.

That Syria’s main ally is Iran, with whom it has a mutual defense treaty, also plays a role in Israeli calculations. Iran’s leaders are not likely to be able to have much military impact in Syria, and Israel can highlight that as an embarrassment for Tehran.

Iran can readily be blamed by association and charged with all manner of provocation, real and imagined. Some have seen Israel’s hand in the provenance of the most damaging charges against Assad regarding chemical weapons and our experience suggests to us that such is supremely possible.

Possible also is a false-flag attack by an interested party resulting in the sinking or damaging, say, of one of the five U.S. destroyers now on patrol just west of Syria. Our mainstream media could be counted on to milk that for all it’s worth, and you would find yourself under still more pressure to widen U.S. military involvement in Syria – and perhaps beyond, against Iran.

Iran has joined those who blame the Syrian rebels for the August 21 chemical incident, and has been quick to warn the U.S. not to get more deeply involved. According to the Iranian English-channel Press TV, Iranian Foreign Minister Mohammad Javid Zarif has claimed: “The Syria crisis is a trap set by Zionist pressure groups for [the United States].”

Actually, he may be not far off the mark. But we think your advisers may be chary of entertaining this notion. Thus, we see as our continuing responsibility to try to get word to you so as to ensure that you and other decision makers are given the full picture.

We hope your advisers have warned you that retaliation for attacks on Syrian are not a matter of IF, but rather WHERE and WHEN. Retaliation is inevitable. For example, terrorist strikes on U.S. embassies and other installations are likely to make what happened to the U.S. “Mission” in Benghazi on Sept. 11, 2012, look like a minor dust-up by comparison. One of us addressed this key consideration directly a week ago in an article titled “Possible Consequences of a U.S. Military Attack on Syria – Remembering the U.S. Marine Barracks Destruction in Beirut, 1983.”

For the Steering Group, Veteran Intelligence Professionals for Sanity - VIPS