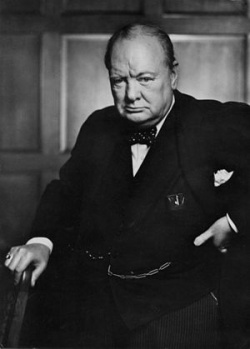 ★ Start a Discussion about this document
The Monstrous Winston Churchill

In his book Churchill, Hitler, and The Unnecessary War: How Britain Lost Its Empire and the West Lost the World [1], Pat Buchanan places particular emphasis on the role of Winston Churchill for his promotion of both World War I and World War II. Buchanan is scathing in his criticism of Churchill, correctly pointing to his bellicosity, his vanity, and his desire for personal power. There are also strong hints of his corruption as a result of being rescued by wealthy Jews from near bankruptcy after the stock market crash of 1929.

Buchanan carries on this theme in a recent column on the Katyn executions, Pat Buchanan once again comments on Winston Churchill’s treachery.

When Polish patriots, whose sons had flown with the Royal Air Force in the Battle of Britain, went to … Churchill to demand that he get answers from Stalin about the atrocity, he brushed them off.

“There is no sense prowling around the three-year-old graves of Smolensk,” said the Great Man.

At Stalin’s request, Churchill bullied the Poles into acceding to Soviet annexation of all the Polish land Stalin had been awarded for signing his pact with Hitler. [2]

Michael Colhaze’s TOO article, To Be a German, Part II, credits Buchanan with shedding light on the truly horrifying spectacle of Churchill. Ever the artist, Colhaze expresses it beautifully:

[It boils down] to one single, terrible truth, namely that this man and his paymasters were the instigators not only of the death of Britain’s and America’s finest young men, but also of the greatest carnage, the worst fratricide committed in Mankind’s entire history. It is really here, in the inordinate hate for Germany as the old heartland of our incomparable Christian-European civilisation, that the roots can be found for the ever intensifying assault on the White Man’s right to exist.

I wonder sometimes how this man must have felt during the twilight years of his life. Terrible, most likely. Fiddling with some pitiful canvas utterly devoid of human warmth, let alone artistic gratification. Abandoned by his old paymasters because that’s what they inevitably do once you’ve lost your expediency. Deserted by his political cronies who knew damn well what mess he had landed them in. Prowling the casinos of Monte Carlo where a greasy Onassis dropped an occasional chip into his pocket since he had blown his pension already at the tables. Bored to death by all the glorifications and laurels and distinctions which honoured, as he himself knew perfectly well, only the one great lie that was his life. [3]

Churchill’s philosemitism is legendary. This review of three books on Churchill’s relations with Jews [4] indicates that indeed, he was “among the greatest friends the Jewish people have had.” The record shows that Churchill repeatedly stood up for Jewish interests throughout his entire very long career in politics — often in opposition to those around him. Churchill’s family was philo-Semitic and socialized with Jews; he received expensive gifts as a young man from Jewish friends of his father. In Parliament, Churchill was an eloquent spokesman for Jewish immigration, and later he had a long career in support of Zionism.

He left a long record of activism for Jewish causes and was rarely deterred from these, even when he found himself in a distinct minority. When overruled by his own Cabinet, he often sought ways around the problem to help Jews and Zionism. The personal and official papers consulted in these studies confirm the picture of a man who rejected anti-Semitism in public and private, something that can be said of very few of his colleagues.

Churchill may have been the greatest friend the Jews ever had. But he certainly was not a friend for his own people.