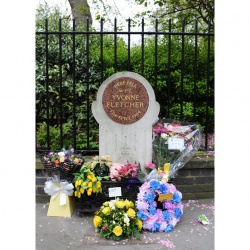 Were British & American intelligence involved in the murder of WPC Yvonne Fletcher?

On 17 April 1984, a hail of gunfire echoed around the prestigious and normally serene St. James Square, London. Located in one corner of the square, was Muammar Qaddafi’s Libyan People’s Bureau. The eleven-round burst, from a Sterling automatic assault weapon felled a number of anti Qaddafi “demonstrators” protesting outside the Libyan Bureau. Killed outright was Woman Police Constable (WPC) Yvonne Fletcher.

Police investigators found weapons and shell-casing on the first floor of the Libyan Bureau. Intelligence sources later revealed, in secret, that they had intercepted a message from Qaddafi, 24 hours prior to the shooting, authorising officials inside the London Bureau to open fire against the demonstrators. Public outrage ensured the expulsion of all Libyan diplomats from British soil.

Eighteen months later, at 2 a.m. on Monday, 14 April 1985, 30 US Air Force and Navy bombers thundered through the night sky above Libya. Of those, eight F111 bombers were tasked with killing Qaddafi. The attack followed the La Belle discotheque bombing in West Berlin, nine days earlier. One US serviceman and a young Turkish woman had been killed outright, and 230 people injured. The discotheque was known as a hangout for off duty US servicemen. Claiming he had irrefutable proof of Libyan sponsorship for the atrocity, an indignant President Reagan immediately authorised military reprisal.

On August 16, 1994, President Reagan signed a National Security Decision Directive (NSDD) classified as Top Secret and bearing the code word “VEIL.” A central theme was to bring about a change of leadership in Libya. Said to be predominantly concerned with disinformation and psy-ops, the NSDD - entitled “Psychological Warfare against Libya” - remains classified to this day. Amongst a host of other still classified NSDD’s signed by President Reagan, is one entitled “Legal Protection for Clandestine Killing Teams.”

The involvement of Conservative MP, Sir Teddy Taylor in the Fletcher story began during the late mid-eighties. The MP had been participating in a government backed initiative to repair diplomatic relations with Libya, following the expulsion of all their diplomats in the post Fletcher fury.

Although Foreign Office officials would never admit it publicly, they viewed Qaddafi with some sympathy. He wasn’t a fundamentalist, his regime did most of it’s business with the west, plus there were 6,500 British ex-pats living and working in Libya. Rapprochement was called for.

Acting as an “honest broker” between the Foreign Office and Libya, Sir Teddy negotiated Libyan agreement to a secret Foreign Office plan. Returning home in sprightly mood, Sir Teddy was devastated to learn that the government had decided to renege on the deal. Worse still, selected details of the plan were leaked to the media which sought to eclipse Foreign Office authorship by placing the entire blame on the MP’s shoulders. There followed a cat and mouse game. Ultimately, Sir Teddy was able to prove his innocence and received an official letter of apology. However, the damage had been done and the MP began taking an interest in the Fletcher case.

In 1992, British citizen, Joe Vialls, was rummaging around in his old files looking for material for a book he was writing. Now living in Australia, Vialls’ was a Hughes Tool Company employee at the time of Fletcher’s murder. During his search, he came across documents he thought were “dynamite.” They revealed the existence of what he believed to be an “ultra low-key” Hughes Tool Co., office at 8 St. James Square, adjacent to the Libyan People’s Bureau.

Aware the Hughes organisation had sometimes fronted for CIA personnel, Vialls grew suspicious. Scrutinising a BBC film taken in St. James Square at the time of the murder, he concluded the fatal shot came from the little known Hughes building. Certain he possessed damning evidence of a British-US intelligence conspiracy to kill WPC Fletcher, Vialls decided to take action. In every respect except one, Vialls’ was wrong. However, his belief that British and American intelligence were behind Fletcher’s murder is now borne out by new evidence.

The arrival of Joe Vialls' letter at Channel Four Television renewed their interest in Fletcher’s murder. They considered Vialls’ information suspicious enough to require detailed investigation, and contacted Fulcrum Productions, a highly regarded documentary film company. Providing them with Vialls’ BBC film analysis and other documents, Fulcrum set about a comprehensive investigation. The alarming results of their meticulous research were broadcast in a Channel Four Television, Dispatches programme during April 1996.

Fulcrum’s first stop was with Coroner, Paul Knapman, who presided over the Fletcher inquest. An attempt to “marry” the original autopsy report with the inquest report proved difficult. Knapman refused the film-makers access to the autopsy findings, despite the request being routed through Yvonne Fletcher’s mother. Receiving advice from Professor Bernard Knight, a leading British Consultant Pathologist, Fulcrum re-submitted his request - noting it conformed to requirements of the Coroner’s Act . The report was eventually released.

Immediately, a number of inconsistencies were evident. Foremost was the original findings of Pathologist, Dr. Ian West, who wrote in his autopsy report: “…the angle of the bullet wound track indicates that she [WPC Fletcher] was shot in the back by a person situated at a considerably higher level… the track would indicate that she had been shot from the upper floors of an adjacent building [to the Libyan People’s Bureau].” Dr West noted that the bullets entry track was consistent with an angle of 60-70 degrees. During later evidence given at the inquest, West changed his mind. Now he agreed with Police investigators that the bullet had come from the first floor of the Libyan people’s Bureau - signifying an entry wound of only 15 degrees. This unusual change in heart was to prove vital.

Reviewing the evidence, Prof. Knight found Dr. West’s amendments strange. “I can’t understand it,” he said. Hugh Thomas, former Chief Consultant to the British Army in Northern Ireland - and an acknowledged expert on gunshot wounds - concluded that Dr. West’s testimony at the inquest was “rubbish.” Adding that it was “facile” and a “nonsense,” he concluded that the updated scenario West painted for the Coroner was “impossible.” Backtracking over the Post Mortem report, Thomas was convinced that the bullet that struck WPC Fletcher must’ve come from the upper floors of an adjacent building. Totalling five floors, the Libyan building simply didn’t have a high enough elevation for the killer shot.

Forensic examination also showed the bullet’s “energy” was depleted and the round was “tumbling” as it hit the police officer. The tumbling effect and the “terminal velocity” are consistent with the use of silencers. Significantly, these effects are even more pronounced following the removal of part of the bullet’s propellant, creating a “low velocity” and, equally importantly, a less audible discharge. The latter is a known technique of British SAS snipers. The damage caused by a bullet doctored in this way is horrific. The “tumbling” bullet tears through the body, ripping tissue and vital organs beyond repair. Whoever shot Yvonne Fletcher was aware it was a death shot in every sense.

The automatic weapon used inside the Libyan Bureau - a 9 millimetre Sterling sub-machine gun - was not silenced. The sharp sounds of it’s eleven rapid-fire rounds being discharged were caught on BBC videotape and analysed by an audio expert for the Dispatches team. An additional videotape was also analysed. It proved to be critically important. Taken by an amateur, the film caught the sound of a “duller” gunshot two seconds after the Libyan gunman ceased firing. The evidence was irrefutable - a twelfth bullet had been fired. What started off as a conspiracy theory in Australia, was fast becoming a conspiracy fact in London.

Some observers look towards former CIA Director, William Casey, as the probable author of the Fletcher assassination. Formerly Reagan’s Campaign Manager during the 1980 election, Casey didn’t mind getting his hands dirty. His involvement in a number of highly illegal activities during his term of office at the CIA are well documented. Probably more than any other person in the Reagan administration, Casey was obsessed with over-throwing Qaddafi, who he called a “Bastard.” Removing Qaddafi from office, by whatever means it took, became de facto policy. Whether the Fletcher murder was part of that policy, we may never know for sure. Casey died in 1987.

The Dispatches team next learned that British and US Intelligence were running a major surveillance post on the upper floors of No 3 St. James Square, next door to the Libyan People’s Bureau. Tom Peile, former security officer at No 3, revealed that as many as 40 intelligence officers were active at the surveillance post in the weeks prior to the shooting. Locations at No3 and No 4 St. James Square were previously used as listening posts before that.

Surveillance included signals interception - reading telephone and telex traffic - the use of sophisticated microphones to pick up conversations and, where possible, physically planting “bugs” inside the Bureau itself. In addition, MI6, MI5, CIA and the Special Branch had human “sources” within the Bureau who were providing regular updates. Significantly, MI5 knew the Libyans had a cache of guns sealed in a cabinet on the first floor of the Bureau. They were all 9 millimetre calibre weapons - the same calibre bullet that killed Fletcher.

Incredibly, no intelligence personnel arrived to man the surveillance post on the day of the shooting. This fact, in view of the previous days signals intercept that shooting had been authorised, must be viewed with the gravest concern. Serious questions also surround the nature of the anti Qaddafi demonstrators who had gathered outside the Bureau on that fateful day. Many were aligned with the National Front for the Salvation of Libya, a CIA funded front organisation.

A well placed and knowledgeable source has told This Writer that the fatal shot almost certainly came from the upper floors of No. 3 St. James Square - location of the secret joint MI5/CIA surveillance post. The operation was engineered to create public outrage that would have hardened the existing “soft” view of Libya by the British government. We were also told that the operation “planners” were concerned that deaths of Libyan protesters by Qaddafi’s own assassin, wouldn’t be enough to mobilise the government to take extreme retaliatory measures. Consequently, an additional target was chosen that was certain to inflame public opinion. Yvonne Fletcher was the sacrificial lamb.

By 1984, Reagan administration insiders believed the Qaddafi card “could be Ronald Reagan’s victory” in the forthcoming Presidential elections, due in November 1994. Anti Libyan sabre rattling became part of the Reagan team strategy, and played well to “middle American” voters. A tour of European capitals by US officials found no appetite on the part of their NATO allies to support US military action against Libya. The Fletcher killing hardened British government attitudes to Libya, and Qaddafi was later targeted by US bombers flying from British bases… previously unthinkable.

Despite receiving a severe mauling by Sir Teddy Taylor and Labour MP, Tam Dalyell, in a House of Commons debate this summer, the Government views the new facts disclosed by the Dispatches programme with a contemptuous wave of the hand. Why? The theory goes that ruthlessly conned, the government is now unable to openly accuse its closest ally of this tragic murder. Nor does it care to address the unpalatable fact that elements within Britain’s own security service are out of control. It is far too easy to have one’s political career ruined by slur and innuendo in today’s free for all media - a technique intelligence operatives excel at.

Four years later another atrocity was to occur that again involved Libya, Britain and the United States. The Lockerbie story also witnessed some very peculiar activities on the part of British and US intelligence. This time, though, suitcases of cash, shipments of Heroin and a “missing” body remain at the centre of an on-going controversy.

Key dates Libya and the US