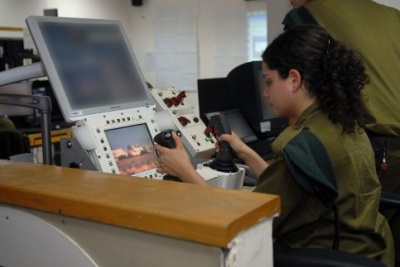 An Israeli soldier operates "Spot and Shoot," a system that allows her to fire a remotely controlled machine-gun to execute Palestinians who approach the fence around Gaza by pressing a button on her joystick. Israel is at the forefront of developing such "remote killing" technology. (Israeli army)

It is called Spot and Shoot. Operators sit in front of a TV monitor from which they can control the action with a PlayStation-style joystick.

Spot and Shoot, as it is called by the Israeli military, may look like a video game but the figures on the screen are real people — Palestinians in Gaza — who can be killed with the press of a button on the joystick.

The female soldiers, located far away in an operations room, are responsible for aiming and firing remote-controlled machine-guns mounted on watch-towers every few hundred meters along an electronic fence that surrounds Gaza. The system is one of the latest "remote killing" devices developed by Israel's Rafael armaments company, the former weapons research division of the Israeli army and now a separate governmental firm.

According to Giora Katz, Rafael's vice-president, remote-controlled military hardware such as Spot and Shoot is the face of the future. He expects that within a decade at least a third of the machines used by the Israeli army to control land, air and sea will be unmanned. The demand for such devices, the Israeli army admits, has been partly fueled by a combination of declining recruitment levels and a population less ready to risk death in combat. Oren Berebbi, head of its technology branch, recently told an American newspaper:

"We're trying to get to unmanned vehicles everywhere on the battlefield ... We can do more and more missions without putting a soldier at risk."

Rapid progress with the technology has raised alarm at the United Nations. Philip Alston, its special rapporteur on extra-judicial executions, warned last month of the danger that a "PlayStation mentality to killing" could quickly emerge. According to analysts, however, Israel is unlikely to turn its back on hardware that it has been at the forefront of developing - using the Occupied Palestinian Territories, and especially Gaza, as testing laboratories.

Remotely controlled weapons systems are in high demand from repressive regimes and the burgeoning homeland security industries around the globe.

"These systems are still in the early stages of development but there is a large and growing market for them,"

said Shlomo Brom, a retired general and defense analyst at the Institute of National Security Studies at Tel Aviv University.

The Spot and Shoot system — officially known as Sentry Tech — has mostly attracted attention in Israel because it is operated by 19- and 20-year-old female soldiers, making it the Israeli army's only weapons system operated exclusively by women. Female soldiers are preferred to operate remote killing devices because of a shortage of male recruits to Israel's combat units. Young women can carry out missions without breaking the social taboo of risking their lives, said Brom. The women are supposed to identify anyone suspicious approaching the fence around Gaza and, if authorized by an officer, execute them using their joysticks.

The Israeli army, which plans to introduce the technology along Israel's other confrontation lines, refuses to say how many Palestinians have been killed by the remotely controlled machine-guns in Gaza. According to the Israeli media, however, it is believed to be several dozen. The system was phased-in two years ago for surveillance, but operators were only able to open fire with it more recently. The army admitted using Sentry Tech in December to kill at least two Palestinians several hundred meters inside the fence. The Haaretz newspaper, which was given rare access to a Sentry Tech control room, quoted one soldier, Bar Keren, 20, saying:

"It's very alluring to be the one to do this. But not everyone wants this job. It's no simple matter to take up a joystick like that of a Sony PlayStation and kill, but ultimately it's for defense."

Audio sensors on the towers mean that the women hear the shot as it kills the target. No woman, Haaretz reported, had failed the task of shooting what the army calls an "incriminated" Palestinian.

The Israeli military, which enforces a so-called "buffer zone" - an unmarked no-man's land - inside the fence that reaches as deep as 300 metres into the tiny enclave, has been widely criticized for opening fire on civilians entering the closed zone. In separate incidents in April, a 21-year-old Palestinian demonstrator was shot dead and a Maltese solidarity activist wounded when they took part in protests to plant a Palestinian flag in the buffer zone. The Maltese woman, Bianca Zammit, was videoing as she was hit. It is unclear whether Spot and Shoot has been used against such demonstrations.

The Israeli army claims Sentry Tech is "revolutionary." And that will make its marketing potential all the greater as other armies seek out innovations in "remote killing" technology. Rafael is reported to be developing a version of Sentry Tech that will fire long-range guided missiles.

Another piece of hardware recently developed for the Israeli army is the Guardium, an armored robot-car that can patrol territory at up to 80km per hour, navigate through cities, launch "ambushes" and shoot at targets. It now patrols the Israeli borders with Gaza and Lebanon. Its Israeli developers, G-Nius, have called it the world's first "robot soldier". It looks like a first-generation version of the imaginary "robot-armour" worn by soldiers in the popular recent sci-fi movie Avatar.

Rafael has produced the first unmanned naval patrol boat, the "Protector", which has been sold to Singapore's navy and is being heavily marketing in the US. A Rafael official, Patrick Bar-Avi, told the Israeli business daily Globes:

"Navies worldwide are only now beginning to examine the possible uses of such vehicles, and the possibilities are endless."

But Israel is most known for its role in developing "unmanned aerial vehicles" — or drones, as they have come to be known. Originally intended for spying, and first used by Israel over south Lebanon in the early 1980s, today they are increasingly being used for extrajudicial executions from thousands of feet in the sky.

In February Israel officially unveiled the 14 meter-long Heron TP drone, the largest ever. Capable of flying from Israel to Iran and carrying more than a ton of weapons, the Heron was tested by Israel in Gaza during Operation Cast Lead in winter 2008-09, when some 1,400 Palestinians were killed.

More than 40 countries now operate drones, many of them made in Israel, although so far only the Israeli and US armies have deployed them as remote-controlled killing machines. Israeli drones are being widely used in Afghanistan. Smaller drones have been sold to the German, Australian, Spanish, French, Russian, Indian and Canadian armies. Brazil is expected to use the drone to provide security for the 2014 World Cup championship, and the Panamanian and Salvadoran governments want them too, ostensibly to run counter-drug operations.

Despite its diplomatic crisis with Ankara, Israel was reported last month to have completed a deal selling a fleet of 10 Herons to the Turkish army for $185 million.