Document:Simon Mann Says He Was Asked to Help Start the Iraq War 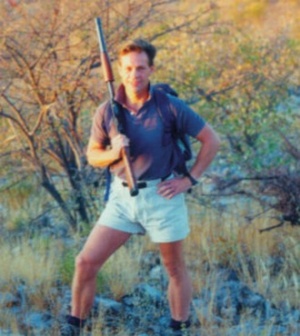 Simon Mann is a British mercenary, most famous for his failed 2004 coup attempt against Teodoro Obiang, president of Equatorial Guinea. An ex-Special Forces soldier, Simon co-founded with Eeben Barlow the private military company Executive Outcomes, which at its height in the mid-90s ran two African wars, using oil money to fund a full-on air force and thousands of private soldiers.

In 2004, after pocketing millions fighting rebels in Angola and, he says, protecting a free election in Sierra Leone, Simon Mann’s luck ran out. He’d been hired to fly to Equatorial Guinea with 69 South African heavies, capture the airport and escort an opposition leader to the presidential palace. During a layover in Zimbabwe to collect guns and refuel, he was busted.

He ended up in Chikurubi Prison, one of Zimbabwe’s nastiest, before being extradited to Equatorial Guinea four years later. There he spent a year and a half in solitary at Black Beach prison, one of Africa’s nastiest, before being pardoned. Simon Mann has written a book about his adventures, there’s a movie in the pipeline and he’s working on a novel he wrote in jail. Between all that, he spoke to me about coups, spies and kick-starting the Iraq War.

'VICE: The world of mercenaries is a pretty murky one – how did you get to the top of it?

Simon Mann: Not on purpose. I left the SAS in 1992 and joined an oil company that had one project in Soyo, Angola. I went into the office one day and they said, "This is it; we’re fucked." UNITA rebels had gone back to war, against the treaties they’d signed, and had captured Soyo, ending our business. I suggested that we retake the town. Two months later, we did. Then the government asked us to take the whole country back. We said "Yep, but it’s going to cost you." We eventually had 2,000 men under contract and a turnover of £12.5 million every nine months.

A nice little earner. Then you went to Sierra Leone?

Yeah. The Sierra Leoneans asked us to go diamond mining there, but there was a problem: a really bad war. So we told the president we'd help him if we could get help applying for a legal diamond concession. It cost us millions to keep fighting, but our money was coming from the war in Angola, which is what made us different from other warlords – we were reinvesting in Africa. Just as we were leaving, the president asked us to stay and secure the election, so it was – not the UN – who protected that election. We kept asking, "What kind of fucking mercenaries are we?" We were the nicest, most well-behaved bunch ever.

Weren’t you also asked to help kick start the Iraq War in 2002?

Yes. A guy called David Hart told me he was friends with the American neocons and asked me to come up with ideas to get the war kicked off. The first was to pick an Iraqi city away from Baghdad, go there with a rebel force made up of 6,000 Iraqi émigrés, take the city, then say, "Yah boo" to Saddam. That would have forced him to come get us and be zapped on the road by the UK and US, or let the flag of rebellion spread.

The second was far more criminal. We wanted to buy an old rust-bucket ship, sail it to Karachi, load up secretly with some weapons-grade uranium, or whatever, then sail it into the Gulf with a motley crew, including me. We’d then leak our presence to the Saudis, get the navy to intercept us, sink their ship – hopefully without killing anyone – then sail into Basra. The world would have gone nuts and we’d have had an excuse for war in Iraq.

Well, yes. We actually got feedback from Number 10, via David Hart, that they liked the ideas, but not me. I believed him.

And then there was the coup attempt in Equatorial Guinea.

Yeah. I was recruited by "The Boss", who told me about President Obiang, his human rights abuses and how much oil he had, then suggested a coup. I thought it was a great idea. I don't want to make excuses, but I can explain a bit. These things are easy with a blank sheet of paper, but our plan gradually morphed over time, thanks to months of frustration and difficulty. By the time we went ahead, we had a shit plan, no money and no time. That’s where we were when I was arrested in 2004.

I think the CIA originally suggested the coup to "The Boss", but then quit because they were worried it would go wrong. Everyone was talking about it, including British and Portuguese intelligence. It didn't look good for the Americans, because we’d bought a cheap Boeing 727 from their Air Force in Florida. Also, the guy I hired to ride shotgun in the plane is a known CIA pilot. I suspect it got to the point where Langley decided to torpedo our coup to remind Obiang they were in charge, and let them demand a change in Equatorial Guinea. From the day I was arrested, everything started to improve there.

But Human Rights Watch says it "remains mired in corruption, poverty, and repression".

Yes, but people there will tell you that was the moment a lot of good stuff started to happen. It’s not a model of democracy, but they're making moves in the right direction. Two days before I was arrested, Riggs Bank – whose biggest customer was Obiang, as well as having a member of the Bush family on the board – closed down. It can only have been operating there with CIA approval.

How do you justify toppling governments for a job?

Well, it’s not my job, but it’s what democracy is all about, in my opinion. In Angola, we were working for a proper, recognised government. In Sierra Leone, our actions led to an election. Equatorial Guinea was different because we were going against an existing government. Saddam, Gaddafi, Assad, all these guys are monsters and richly deserve to go. You have to be careful and it’s complicated, but bullies and tyrants are bad news. I really feel for the people of Syria, for example. Assad has turned the weight of a modern state against unarmed people. Fuck him.

White people running around Africa doing whatever they want – isn’t it all very colonial?

Well, it at least it looks that way. But there are plenty of black mercenaries and plenty of white Africans running about as well. The danger is that, if people are making money out of wars, there's a risk they could start them. Aside from Equatorial Guinea, everything I’ve done involved terrible situations which were not of my making and which I was trying to end. That was our moral position. You have to look yourself in the mirror every morning, and pretty much everyone who’s ever seen a war knows they’re not nice. Full-on private militaries are bad news.

But that’s what you were doing.

Yeah, but if you’re walking past a house and it’s on fire, you help to put it out. In my day, the UN was completely useless – they were spending billions and didn't put the fire out. We did. But intellectually, I don't think offensive fighting is for mercenaries. You need the mandate and the law of a government behind you. Once the motive is profit, things get impossibly difficult. Companies will cut corners to save cash, which isn't cool.

So those days are behind you?

Well, no – I enjoy the work still. And if I saw a house on fire again, I’d say "OK," if I thought it was morally right.