Document:MH17 And Other Traps To Avoid 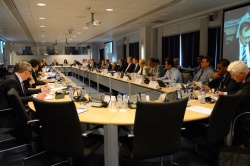 The propaganda machine in the west is once again ramping up and spewing out one false claim after another about the shoot down of MH17 last year over eastern Ukraine and each story is more absurd than the one before it. On the 13th of August the British newspaper, mistakenly called The Independent, made the bizarre claim that Russia has:

“....stoked tensions with the West by burning Dutch flowers in what is regarded as a political statement over the investigation into the Malaysian Airlines flight disaster headed by The Netherlands.” [1]

The Independent states that its source for this garbage rests on unnamed “critics” and then goes on to repeat the NATO party line that Russia is trying to block the facts from coming out.

Just two days before this the BBC claimed a leak from the Dutch investigation indicated Russian missile parts were found at the site. [2] However they failed to mention later that Dutch investigators refuted this mysterious leak and stated their investigation did not conclude that at all. [3]Both these stories made sure to repeat that Russia had blocked a UN tribunal from being formed to look into the crash and punish those responsible.

Dr. Alexander Yakovenko, the Russian Ambassador to the UK and former deputy foreign minister, captured the situation in this statement made on 31 July 2015, in regard to the call for a UN tribunal,

“Why the rush? Is it to help the investigation, or rather to replace it? Progress towards justice must be seen. So far, we have seen nothing. Our partners preferred to conduct a vote that is impossible to explain by any other motive than seeking a fresh pretext for pointing a finger at Russia. It is only to be regretted that the unity and authority of the Security Council has once again become hostage to political ambitions having nothing to do with either justice or a peaceful resolution of the crisis in Ukraine in its entirety. For its part, Russia will continue to seek both.”

He went on to correctly point out that the only ones blocking the findings of the investigation from coming out are the NATO countries and its ally Australia who refuse to release any of the findings of the investigators and have delayed the report until October of 2015. Russia is not blocking anything. It was the first country to demand a full and independent investigation into the matter and, to ensure that, helped to pushed through Security Council Resolution 2166 on 21 July 2014 that deplored the incident, stressed the need for a full, thorough and independent investigation in accordance with civil aviation guidelines, called for the involvement of the International Civil Aviation Organization, called for securing the crash site and safety of investigators and demanded that those responsible be held accountable.

What did the Americans and their puppets in Kiev do? Nothing except to launch an immediate and intense propaganda campaign against Russia going so far as to pin responsibility on President Putin personally. They even claimed that they had evidence. But they have produced none. Russia asked them for this purported evidence multiple times and each time they were met with silence followed by another volley of propaganda aimed at confusing the western public and covering up the fact that they do not want the Dutch report released for if that investigation had evidence that Russia was involved we can be sure it would have been plastered all over the mass media long ago, instead of these small leaks that drip out on a regular basis to keep the pot boiling.

While NATO engaged in propaganda games Russia insistently called for a transparent, independent and honest investigation, quickly supplied to the investigators its satellite and radar data, eyewitness reports, and technical information regarding Buk missile systems and offered to assist in the investigation. The Americans have said nothing about any of this information of course because all of it points to their allies in Kiev being responsible for the shoot down and because the United States was involved or became complicit by protecting its allies from facing responsibility for their actions.

As for the MH17 tribunal demanded by the probable culprits the United States and its dependencies in NATO and Kiev, Russia was correct to reject that demand and correct to veto the draft resolution.

There is no doubt whatsoever that the push by NATO countries for a UN tribunal to investigate and prosecute those responsible for the shoot down was an intentional provocation against Russia. There was no other purpose for this NATO initiative than to use it to demonize the Russian leadership, to increase the negative war propaganda being put out by the NATO alliance and ultimately to use it as justification for further aggression against the peoples of east Ukraine and Russia.

There must be no doubt in any reasonable person’s mind that the only result of the creation of such a tribunal by the Security Council was to be an indictment against President Putin himself accusing him of some type of command responsibility. Once Putin was indicted as a war criminal, the anti-Russian propaganda in the west would increase beyond even the intense levels it now has reached.

We saw what happened to President Milosevic of Yugoslavia when the Yugoslav tribunal indicted him with war crimes at a point during the NATO attack in 1999 when the French and Germans were looking for a political solution. The US driven indictment, arranged through their agent Louise Arbour, effectively killed a political solution since as Arbour stated, and I paraphrase, “you can’t negotiate with a war criminal.”

The same happened to Muammar Gaddafi. The International Criminal Court, again through its US marionettes in the prosecution, labelled him a war criminal and used it to justify their destruction of Libya. Both Milosevic and Gaddafi ended up dead at NATO’s hands.

What’s more the UN Charter does not give the Security Council the right or jurisdiction to create these ad hoc tribunals and in fact this possibility was explicitly excluded when the International Court of Justice was created which has very limited jurisdiction and none over criminal matters. Of course tribunals have been created as a matter of fact despite this problem but an illegal precedent is still illegal no matter how many times it is repeated.

It is clear that the ad hoc tribunals previously set up for Yugoslavia and Rwanda were set up during a period when Russia was under the sway of President Yeltsin and others willing to act in US interests without caring about the implications for Russian and world interests. Russia, and China lost all control over the funding, staffing and running of these tribunals from the very beginning which, from the personal experience of this writer and other defence counsel, are controlled at all levels by western intelligence assets [Wikispooks' emphasis].

The indictments and evidence at these tribunals are concocted against selected accused for three reason; to defame the leaders targeted, to justify the western aggression against these countries, and finally to cover up the real role of the west in these wars.

A further problem with the proposed MH17 tribunal was the claim that it was a matter under Chapter VII of the UN Charter, that is, a matter of international peace and security. The fact that the other ad hoc tribunals have been created under Chapter VII reveals their true political nature. But in the case of MH17, no such argument can be validly made since there has never been an example of a plane being brought down in any circumstances that has triggered the use of Chapter VII of the UN Charter. No call was made by anyone to create a UN tribunal with regard to the downing of the Iranian, Libyan and Korean airliners or even the downing of the plane carrying Dag Hammarskjold, the UN Secretary General, in 1961. It seems when western interests might be affected, the less that is known, the better.[Wikispooks' emphasis].

But there was another problem with the proposal that reveals its true political nature. A court can only try those accused of a crime determined to have taken place and can only try accused against whom there is evidence. In regard to MH17 there is the NATO propaganda on one side claiming Donbass militias were involved, aided and abetted by Russia, but without any evidence of this being produced, and, on the other hand, evidence supplied by eye witnesses, air traffic controllers, Ukrainian military pilots and Russian radar plots that indicate that it was more likely shot down by a Ukrainian government Sukhoi jet fighter. In any case, whatever the facts really are, the investigation is not complete and not complete because the NATO alliance refuses to release information that is necessary to make a determination as to who is responsible and what their motives were.

Since NATO is not willing to offer this information to investigators now nor to make it public why would they do so if a tribunal were created? They would not. They would have used that tribunal as a forum to bash Russia, fabricate evidence and used it to justify even more western aggression.

The proposal was clearly a trap for Russia and so its veto of July 29th was welcome news. Russia will continue to face criticism from the usual suspects in NATO and more ravings by Samantha Power in the Security Council and more bizarre stories in the western press that it is trying to stop “justice” or is afraid of the investigation, but better to treat these false accusations with a dismissive wave of the hand than to have taken the bait and be faced with the constant harassment, and injustice that would have surely followed if such a tribunal had been approved.

But the constant propaganda clearly signals the intent of the NATO countries and that is to try to overthrow the government of Russia one way or another. Russia avoided the NATO tribunal trap, but there is no doubt that other traps will be set and one of them and perhaps the most important is the propaganda trap we in the west must learn to recognise and avoid so that we do not fall into the worst trap of all, supporting aggression that profits the few but risks the nuclear annihilation of us all.