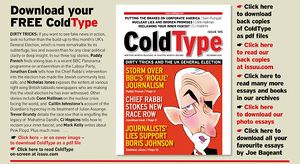 ★ Start a Discussion about this document
IS THE BBC ANTI-LABOUR?

On 10 December 2019 – two days before the General Election – we will know if Panorama has won the Politics Journalism prize in the 2019 British Journalism Awards for its programme "Is Labour Anti-Semitic?" If presenter John Ware, director Leo Telling, executive editor Neil Grant and Panorama editor Rachel Jupp win, it will be a bad day for journalism in the UK. Labour branded the 59-minute film, broadcast on July 10, an “authored polemic” by John Ware, a reporter who has made no secret of his personal contempt for Jeremy Corbyn. Labour also condemned the programme as “an overtly onesided intervention in political controversy by the BBC”. The Corporation hit back saying the “BBC stands by its journalism…we completely reject any accusations of bias or dishonesty.”

This interim Press Gang report presents the initial findings of a long examination of the Panorama programme:[1]

We believe Labour’s criticisms are sound – the broadcast was a piece of biased journalism.

The first part of this report is taken up with a detailed “charge sheet” which shows how the Panorama programme systematically broke key sections of the BBC’s own Editorial Guidelines.

The second is a reprint of a more general article which has just appeared in the international magazine ColdType, based in Toronto. There’s little or no appetite for this type of reporting in British mainstream media.[2]

Press Gang is contesting the action.

This appeal is to help pay the substantial costs of instructing solicitors to fight these potential libel proceedings.

— a full retraction of all Press Gang criticisms

— a statement to be read out in open court and

Mark Lewis of Patron Law, who acts for Ware, has agreed a “conditional fee arrangement” where the firm acts for Ware on a no-win, no-fee basis.

He has also taken out insurance which limits Ware's exposure should he lose.

It also means that if Press Gang fails to win, the website will be liable for the cost of the insurance.

Press Gang has instructed the London solicitors Bindmans to act for Paddy French.

“It's clear John Ware feels our report is an attack on his professional integrity.”

"We're confident our report was a fair criticism of a contentious piece of broadcasting and that a court will agree with us."

"But we cannot get to that point without your crowdfunding help."[3]

Yesterday, Bindmans replied to the letter from John Ware’s solicitor claiming the Press Gang pamphlet “Is The BBC Anti-Labour?” is “seriously defamatory”.

“The defamatory allegations against your client are matters of opinion, based on the facts set out in the …. report.”

“Mr French is surprised that an experienced journalist like your client has threatened libel proceedings rather than joining in public debate and we invite you to withdraw the threat forthwith.”

“In the event that your client commences legal proceedings then the matter will be vigorously defended.”

John Ware’s solicitor, Mark Lewis of Patron Law, has acknowledged receipt of the letter and says he will reply by the end of the month.

The Press Gang appeal has now passed its initial £5,000 target.

“In this case, the support of 200 people is helping to level the playing field.”

“It’s also a vote of confidence in the integrity of Press Gang journalism.”[4]