Document:David Cameron in the Knesset. March 2014 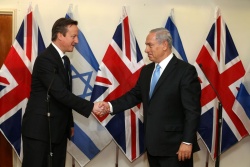 It was in front of a packed parliamentary chamber that the British Prime Minister David Cameron finally felt able to express his devotion to the people who had stood by him. In a voice shaking with emotion he spoke of the real connection he felt with them, how he admired their thousand years of history, how it had shaped him personally and finally how he would always defend their right to exist. His commitment to their security would always be “rock solid”

There was only one problem. He was not in the House of Commons standing up for the rights of the native British. He was in the Knesset [1] and the people he was speaking of defending were the Jewish — and only the Jewish — population of Israel.

And he had one surprise.

“My Jewish ancestry is relatively limited but I do feel just some sense of connection. From the lexicon of my great, great grandfather Emile Levita, a Jewish man who came from Germany to Britain 150 years ago to the story of my forefather Elijah Levita who wrote what is thought to have been the first ever Yiddish novel.”

It was all par for the course for Britain’s shape-shifting prime minister. In recent months he has donned a turban to placate the Sikh community, he has tried to stave off the Scottish campaign for independence with stories of his Scottish forebears. But the Jewish angle caught many by surprise.

Cameron’s Knesset speech came in brief trip a fortnight ago to cement relations between the UK and Israel. It is a considerable relationship that is often overlooked because of Israel’s links with the USA. Bi-lateral trade between the two countries has soared to £5.1 billion and Britain’s unstinting support helps Israel to side-step trade restrictions issued by the European Union from Brussels. Advertisement

Britain may be an enthusiastic supporter of European Union sanctions against Iran but Cameron wanted his Jewish audience to know that when it came to Israel it would be different. He said: “People come to this Parliament to tell you how to run your peace process. … I am not going to do that. You don’t need lectures from me.”

Cameron’s support comes at a crucial time. Boycott, Divestment and Sanctions (BDS) is a global campaign which uses economic and political pressure on Israel to end the occupation of Arab land. The BDS has had a degree of success in Europe — pension funds have disinvested and companies have withdrawn from Israel

And while it has achieved headlines and gained celebrity and fashionable support from left-wing quarters, the boycotts of musical events, academic gatherings or of supermarket Jaffa oranges have had a limited effect.

Apart from the USA, no country in the world has done more to forge close financial and security links with Israel than Great Britain. [2] Whether he is pouring British taxpayer money into setting up a Holocaust Commission, [3] or leading a business delegation to Israel, Cameron’s message is always the same: They can rely on him.

The Prime Minister’s latest idea to deepen this already knee-deep relationship involves the setting up of something called the UK-Israel Tech Hub. [4] For public consumption it is all about leading-edge health and green technology, but there is much more to it than that.

Israeli companies now provide a lot of the tech for the spy, security and surveillance infrastructure that powers Britain’s 24-hour surveillance society, the most intrusive in the world, and much of the expertise and management originates in Israel’s military intelligence establishment.

Haim Shani, the chairman of the Hi Tech Hub, is a good example. His own company, NICE Systems, [5] specializes in military and security applications of telephone voice recording, data security, and surveillance. It was founded by seven ex-Israeli army colleagues — quite possibly [6] because the Israeli government decided to allow its programmers to use technology originally created for MOSSAD’s Unit 8200 to set up companies that would be able to secure foreign contracts which would be impossible for MOSSAD itself to secure for obvious reasons. NICE Systems is an excellent example

High above the rugged and windswept coast of Wales visitors can often glimpse another example of Israeli British defence co-operation — drones. A new generation of unmanned aerial vehicles is being developed at Aberporth in West Wales. Britain, the USA and Israel are the only countries in the world to have used drones in combat. The Israeli-made Hermes 450 [7] is a frequent sight while its successor, another British- Israeli joint venture, the Watchkeeper, [8] will soon take to the Welsh skies at a cost to the British taxpayer of £15 million each.

Most controversially though, one of Israel’s most notorious companies, Verint, [9] has just signed a deal with BT, Britain’s largest telecoms operator, to provide “workforce management” services, voice-of-customer analytics solutions into organisations through a ‘Contact Centre in the Cloud.’

A few years ago Verint was involved in a huge bugging and wire tapping scandal in the USA [10] when it came out that Verint had been hired by US telecoms giant Verizon to secretly collect phone calls and email data from Google, Yahoo and others, to send to the NSA.

The role of Verint and another Israeli company, Narus, in the wiretapping was explained by that indefatigable investigator of the American secret state, author James Bamford [6]

They put mass surveillance equipment in these facilities. So you have AT&T, for example, that considers it’s their job to get messages from one person to another, not tapping into messages, and you get the NSA that says, we want, you know, copies of all this. So that’s where these companies come in. These companies act as the intermediary basically between the telecom companies and the NSA. ….

These companies have foreign connections with potential ties to foreign intelligence agencies, and you have problems of credibility, problems of honesty and all that. And these companies — through these two companies pass probably 80 percent or more of all US communications at one point or another. [11]

Verint, nominally based in New York, is almost completely Israeli at board level. According to Haaretz, [10] it has ties to the shadowy Israel Defense Forces intelligence-gathering Unit 8200.

And how safe, reliable and trustworthy are these people? The founder of both Verint and its parent company Comverse is former Israeli military officer Jacob “Kobi” Alexander. He went from being one of the world’s highest paid executives to a fugitive from American justice in 2006 when he fled the US to Israel and then to Namibia which has no extradition treaty with the US — but not before he had transferred millions of dollars from Verint’s parent company Comverse into his personal Israeli account.

In 2001 Fox TV broadcast an explosive investigation into Israeli spying in America. [12] It was revealed that Comverse — parent of Verint — had been the subject of complaints from 40 law enforcement organisations which claimed that its eavesdropping equipment was compromised because of a “back door” through which access to the wiretaps themselves can be gained by “non-authorised parties.” The Fox programme went into Comverse’s history of close involvement with Israeli intelligence and revealed that the Israeli government underwrote half of its R&D costs.

The Fox TV reporter Carl Cameron said that “investigators within the DEA, FBI and INS have all told Fox that to pursue or even suggest Israeli spying through Comverse was considered to be career suicide.” An FBI source told the reporter said that several FBI inquiries into Comverse had been halted “before they had actually tested the equipment for leaks.”

Another Israeli company with a substantial UK presence is the world’s largest telephone billing software provider Amdocs which has Bell Atlantic, Bell South and Vodaphone Airtouch as clients and processes the billing for as much as 80% of American phone subscribers.

Amdocs made national headlines when it was named during the same Fox TV investigation into the arrest of 60 Israeli citizens during an espionage investigation into suspicions that Israel may have had prior knowledge of 9/11 — and failed to share it with their allies.

The four-part Fox investigation revealed that some Israeli suspects may have been tipped off by information leaking out of Amdocs and the company had been the target of repeated investigations by the FBI, CIA and other defence agencies. The Fox investigation began pre-9/11 and spun out of the Jonathan Pollard inquiry.

Despite repeated investigations drawing a blank, [13] rumours have persisted about Amdocs. It is based in Chesterfield, Missouri though registered in the Channel Island tax haven of Jersey. Its revolving door of CEOs suggests limited southern involvement. Since 2002 Dov Baharav replaced Avi Naor and then Eli Gelman replaced Dov Baharav who has since joined the board of Israeli Aerospace. In England, Amdocs OSS is based in Bath and its UK customers include BT, Vodaphone, HSBC Bank and many others. [14]

So what does all this mean? It means that the web of security state apparatus of Israel has become so integrated with that of Britain as much as the USA that it puts it out of range of any meaningful boycott.

But it also means that the investment of the talent spotters who latched onto David Cameron as a man to watch has paid off. Up until now it was thought that no British politician could get closer to Jewish money and connections more than Tony Blair. David Cameron proved them wrong.

From his earliest days he has been the beneficiary of Jewish patronage, money and connections. In the only job he ever had outside politics he was parachuted into a senior executive PR role courtesy of one of Britain’s richest businessmen. His closest friends at university were Jewish.

His campaign for the leadership of his party was underwritten and managed by the formidable Jewish king-making lobby in the Conservative Party. And as prime minister he has managed to not do anything that would alienate them.