Craig Murray refers to this review on his blog, noting that this review mentions him by name, "yet the book as put on sale contains not one single mention of me or my evidence, and the book’s chapters on British complicity with torture in the war on terror are extremely short and scanty, given Cobain’s genuine wide knowledge and expertise in the subject."

This is an extended review of a book which will shock those accustomed to the British official narrative of alleged 'non-involvement' in torture. The plain, unarguable facts are that, when the British State judges its security interests to be at stake, the gloves always come off; systematic depravity towards its captives is indulged, alongside simultaneous claims of the exact opposite. The book shows that, in all important respects, the British military/security establishments have led the world in the calculated use and refinement of torture techniques.
See Also 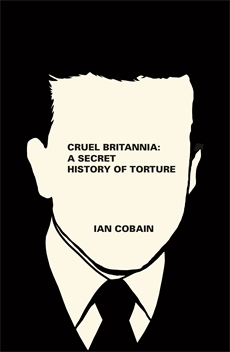 In 2006, Cpl. Donald Payne was the first British soldier to be convicted of a war crime in this country under the International Criminal Court Act 2001. His crime was the inhuman and degrading treatment of prisoners held by British Forces in Southern Iraq in September 2003. He received a year in jail and was dismissed from the British Army for his crime. However, whereas a foot soldier who is complicit in torture is sent to jail – as the book reveals, for those higher up the social spectrum a CBE, knighthood or peerage await. Such is the hypocrisy in the British history of torture.

If that sounds like an unlikely or extreme thing to say, I can only respond by saying read Cruel Britannia by Ian Cobain.

His book is a remarkable narrative and will come as something of a shock to most readers who are taken in by Britain’s image of fair play and decency abroad. This is a myth, as Cobain explosively demonstrates. When the publishers sent me the manuscript I wrote to them that it was like hand grenade rolled into the heart of the British Establishment. Here is why.

Firstly, the book is explosive because it reveals direct participation by the United Kingdom in torture since 1944. This probably will come as a great surprise to many readers but the official line that “the British do not participate in torture”, is revealed as just part of a deliberate and well-practised line of deceit. The book charts the use of torture from “the Cage” in London used to interrogate leading Nazi’s at the end of the Second World War, through the colonial campaigns of Kenya, Cyprus and Aden and then makes the link to Northern Ireland, Iraq and Afghanistan with the repeated and wilful use of “the five techniques”. It exposes the exceptional brutality of the British in the treatment of the Mau Mau in Kenya - as is just beginning to emerge in the case of Nzili, Nyingi and Mara, currently being heard in the High Court.

Evidence reveals that one British policeman at the time described the conditions in the camps as “far worse than anything I experienced in my four and a half years as a prisoner of the Japanese”. To hear the British described as being more brutal than the Japanese will come as a great shock but, should there be any doubt as to the depravity of British Forces, the description in the book is unequivocal:

“Men were whipped, clubbed, subjected to electric shocks, mauled by dogs and chained to vehicles before being dragged around. Some were castrated. The same instruments used to crush testicles were used to remove fingers. It was far from uncommon for men to be beaten to death.”

If this still does not convince any reader then, if they can get to London, I suggest they go to the High Court to hear it for themselves.

This savagery by the British continues throughout the colonial period and Cobain details the campaigns in Cyprus against EOKA and in the Aden Emergency where yet more torture was perpetrated on those we captured. The book then makes interesting references to the refinement of torture techniques which were developed in between 1950-1970 known as an “assault on the mind” whereby far subtler techniques capable of causing “irreparable psychological damage” were developed. The scientists found that a combination of five things: sensory deprivation through hooding, together with enforced stress positions, white noise, sleep prevention and very little food together produced “stress that was almost unbearable for most subjects”.

This resulted in what became known as the “five techniques” which were subsequently employed against the IRA during interment in 1971 and later banned in the case of Ireland v UK in the European Court of Human Rights in 1978. Yet, despite the assurances of the British Government that such practises would never again be repeated in any circumstances, Cobain makes the very alarming claim that the five techniques were in fact retained by the UK which is, perhaps, why they re-emerged in Iraq in 2003 and why the doctrine cited by the Intelligence Branch during the second Iraq War miraculously went missing when it came to the Baha Mousa trial in 2006 and the Inquiry two years later.

The second reason why the book is explosive is because it exposes the institutional cover up that has been perpetrated throughout the post war years. At the time of writing this article there is a sense of national outrage at what appears to be an institutional cover up over Hillsborough and connivance by numerous institutions in the Savile affair. Indeed, it seems to be a national trait that there are so many institutions and individuals who are prepared to participate, passively or actively, in a cover up of scandals for something as prosaic as enhancing their own career prospects or reward from the State.

The ‘Establishment’ is shown to be remarkably adept at not establishing the truth using methods every bit as subtle as those developed by the interrogators in the 1950’s – 70. At the same time, the book reveals the courage of a few men and women who stand against torture. Men such as Colonel Arthur Young who repeatedly complained to Sir Evelyn Baring about the “unjustified or abhorrent crimes by British Forces” in Kenya but who resigned when he realised that Baring and others were not interested in his complaints. Or Lord Gardiner, who spelt out the legal position that the five techniques were a flagrant breach of International and domestic law but who was similarly ignored lest it get in the way of an interrogator’s war. At the same time, the few good men who do speak out know what fate will befall them. Craig Murray was drummed out of the Foreign Office for revealing Foreign Office connivance with torture evidence [1] and Ben Griffin, the former SAS Trooper who spoke out against the UK treatment of prisoners in Afghanistan, is now living under a Government injunction which prevents him from speaking any further. [2] If he breaks the terms of the injunction he will go to jail. In Cruel Britannia you can lose your job or go to jail for revealing UK complicity in torture and rendition. Those who are complicit meanwhile remain untouched and untroubled. The only tap on the shoulder is the sword used to knight them.

Finally, the most explosive part of the book is the fact that complicity in torture and rendition are potentially war crimes and are required to be outlawed in our domestic criminal law. The UN Convention against torture (UNCAT) states:

“each State Party shall ensure that all acts of torture are offences under its criminal law. The same shall apply to an attempt to commit torture and to an act by any person which constitutes complicity or participation in torture”.

If such acts are committed during armed conflict then they constitute a war crime or, in the case of rendition, a crime against humanity. However, to date despite increasingly weighty evidence no one has been prosecuted. As the Tory MP David Davis recently stated in the case of R v. Ahmad and others:

“Although the combined circumstantial evidence of complicity in all these cases is overwhelming, it has not so far been possible — because of the government’s improper use of state secrecy to cover up the evidence — to establish absolutely clear sequences of cause and effect.”

And here lies the rub. As the weight of evidence mounts up, so the State becomes increasingly desperate to cover up. Miliband (D) pirouettes in the High Court, Straw denies any involvement in rendition before his assurances are contradicted by the discovery of documents in Tripoli. Then up pops the so called “Justice and Security Bill” - currently making its way through Parliament - in a desperate, blanket attempt to cover up all UK complicity in torture and rendition. However, the more attempts there are to cover it up the more the issue is exposed and it must be the supreme irony that as details of torture are finally being exposed from Kenya, the Government is embarking on yet another cover up.

This is why Cobain’s allegations in Cruel Britannia are like a hand grenade in the heart of the establishment. The truth has had the pin pulled out of it by this book and is likely to go off at any moment. When it does, it will not only be the foot soldiers who end up being caught in the explosive consequences.

About the review author