Document:Countdown to Destruction in Syria 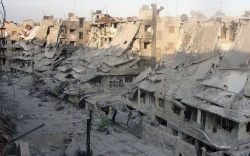 The following is a timeline of U.S. and western European intervention in Syria over the past 100 years. While it is clear from reading the timeline that the United States has been inimical to Syrian governance for an extended period and even planned to break the country up into defenseless statelets, the larger context of this behavior should be kept in mind. The history of the United States begins with the elimination of the continent’s original inhabitants, the Native Americans, who numbered approximately 10 million. Eight years after the massacre at Wounded Knee the United States claimed Hawaii and asserted ownership of the Philippines. A modern median estimate for the number of Filipinos killed in the 1899-1902 war against the United States is one million.

In 1945 the United States ignored the declarations of independence of both Vietnam and Korea, dividing both countries in half, resulting in a three-year war in Korea that killed four million people, and a 30-year war in Vietnam (starting with the U.S.-supported French effort to regain their colony from 1945-1954) that killed five million people, if we count the sideshow saturation bombing of the impoverished, rice-farming nations of Laos and Cambodia from 1965-1973.

Over a 22 year period from 1990 to 2012 via continuous bombing, sanctions and various forms of torture the United States destroyed the country of Iraq, followed soon after by the destruction of Libya. It continued the unraveling of Afghanistan, which actually began when the British invaded that country in 1838 (and again in 1868). So the destruction of Syria is just standard operating procedure for the American government.

Countdown to Destruction in Syria

The United States has had destructive tendencies for a while now

“I want to go on record as saying that this is the stupidest, most irresponsible action a diplomatic mission like ours could get itself involved in, and that we've started a series of these things that will never end.” US State Department official Deane Hinton on a CIA coup to manipulate Syria & its government, 1949 [1]