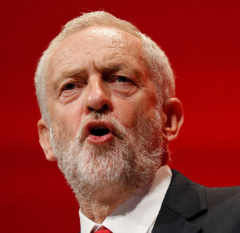 As Theresa May scrambled frantically to present her Ireland ‘deal‘ as anything less than the utter capitulation it was, Labour leader Jeremy Corbyn gave a landmark, statesmanlike speech in Geneva on the great challenges facing us.[1]

What few may know – because the commercially-controlled media have been largely silent on it – is that Corbyn was also in Geneva to receive the international MacBride Peace Prize in recognition of his decades of commitment and service to peace.[2]

The award is presented jointly by the International Peace Bureau (IPB) and the World Democratic Forum. The reasons for the award are described on the event’s website:

Jeremy Corbyn is awarded – for his sustained and powerful political work for disarmament and peace. As an active member, vice-chair and now vice-president of the Campaign for Nuclear Disarmament in the UK he has for many years worked to further the political message of nuclear disarmament.

As the past chair of the Stop the War Coalition in the UK he has worked for peace and alternatives to war. He has ceaselessly stood by the principles, which he has held for so long, to ensure true security and well-being for all – for his constituents, for the citizens of the UK and for the people of the world.

Congratulations Jeremy Corbyn. The Labour leader has frequently been on the right side of history in his political stands, in spite of constant Establishment criticism, and has received a little of the recognition due.

Let’s hope it’s not long before similar recognition at the ballot box sweeps him and his transformed Labour Party into Downing Street.