British prime minister Tony Blair
shakes hands with then US president
George W Bush after addressing
the media at the White House
Washington DC on 17 May 2007.

Katharine Gun is a former linguist and analyst at Britain’s GCHQ intelligence agency and an Iraq war whistle-blower. Her act of whistle-blowing is portrayed in the film Official Secrets

In November 2003, I was charged with a breach of the Official Secrets Act in the UK. My ‘crime’ had been to reveal an email from the US National Security Agency (NSA) to Britain's intelligence agency, the Government Communications Headquarters (GCHQ) where I was working at the time.

The email, which arrived on 31 January 2003, specified a US operation to target the home and office communications of six foreign diplomats on the UN Security Council. The purpose was to use the information gathered to strong-arm those states into voting for a resolution supporting an invasion of Iraq.

I leaked this email via a contact, which then made its way to The Observer newspaper.

I believe that this operation, using intelligence for the specific purpose of garnering votes to authorise a highly contested and deeply unpopular war against Iraq, was not only illegal but also immoral.

Eight months later, I was charged and faced the prospect of a two-year custodial sentence. I pleaded not guilty and my defence team requested all the legal advice from the then Attorney General Lord Goldsmith to then Prime Minister Tony Blair. Within a day of the defence team submitting this request, the charges against me were dropped.

In court, the prosecution stated that “there is no longer sufficient evidence for a realistic prospect of conviction”, adding that “it would not be appropriate to go into the reasons for this decision”.

Sixteen years later, the then prosecutor, Sir Ken McDonald, claimed that it was for “national security” reasons that the case against me was dropped. 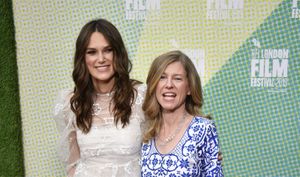 In its own small way, my case illustrates the conflict and tensions around the issue of “national security”. I would argue that the Iraq war was not only against our national security but has been catastrophic for global security as a whole.

In fact, Lord Goldsmiths’ own legal advice at the time (prior to him changing it) was that an invasion would be illegal. The surveillance operation revealed by the NSA email was illegal under the Geneva Convention. It was in pursuit of an illegal war which has damaged our national security. Information about this issue is classified, however, and the reason for this is to do with “national security”.

National security is often the term used by government or intelligence officials to justify what they do, but who defines what it is? What is the scope of it and what are the checks and balances?

It is accepted without question as a legitimate concept, but the collective consequences of the previous two decades of invasions, bombings, rendition and torture, drone attacks, kill lists, massive surveillance, human rights violations, bulk data collection/storage/analysis and exploitation… paints a very dark picture. Do these policies provide “national security”? Are they in the “national interest”?

Looking back over the last two decades, my father’s lament that we are in the “Age of Insanity” rings remarkably true. Many of the numerous, multi-faceted, horrendous consequences of the invasions of Afghanistan and Iraq were predicted by peace activists, international relations experts, academics and journalists. One was also raised by our intelligence services, which was the increased risk of terrorism within the UK as a result.

The argument that we invaded those countries essentially for reasons of national security rings hollow, when looked at with 20/20 vision. As does the same argument over the catastrophic bombing of Libya in 2011, which caused the collapse of another relatively stable and functioning country, the support of anti-Syrian government terrorists since 2013, and the unwavering support for Saudi Arabia against Yemen.

The current bellicose focus on Iran in an already chaotic and conflict-torn region tests the limits of sanity.

On the back of all this chaos and violence, two decades of enhanced anti-terror legislation and intrusive and illiberal surveillance and investigative powers legislation have been crafted and passed. There is also a growing public and private network of intelligence agencies working behind the scenes, all of whom must sign the Official Secrets Act or are understood to be bound by it.

Being in receipt of secret information can convey a sense of power and uniqueness on a person or group of people. When someone is legally bound by an oath of silence to keep secrets, the violation of which leads to imprisonment, the sense of uniqueness and power is edged with fear.

Britain’s Official Secrets Act 1911 was rushed through parliament in July 1911 in a hysterical pre-war environment without so much as a cough of protest. It was drafted without including a specific public interest defence, ie the ability for those accused to argue that the public interest in disclosing the information would outweigh the reasons for not disclosing it.

The wording left only a tiny opening for such a defence, by referring to information gathered as “communicated for a purpose prejudicial to the safety or interests of the State unless the contrary is proved”.

But this was shut down in a reform of the secrecy act in 1989. Front bench opposition Labour MPs at the time, including Tony Blair, challenged this, arguing for the inclusion of a public interest defence. Disappointingly, but perhaps unsurprisingly, those same politicians did nothing to redress the balance while in government.

In her book [1], Ann Rogers writes that “national security policy is in the hands of those who have infinite belief in their loyalty and endless suspicion about everyone else; there is a clear us/them binary, with the loyalty of those ‘inside’ the policy making apparatus as virtually beyond question”.

She explains that this policy making centre may also include “interest groups or newspaper editors” but that the decision making process is a closed one due to there being no structural way for people outside this “centre” to have any influence. A clear example of this is the millions who marched against the Iraq war. “Governments only need utter the words ‘national security’ and the door to democratic participation is firmly shut,” Rogers argues. 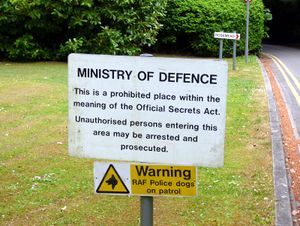 A sign in the village of Ashton Clinton, Buckinghamshire, UK

This remarkable situation in the 21st Century leaves us with a persistent, pressing problem. Who do we turn to, what do we do, if we believe that members of the government or intelligence services or the government itself are acting illegally, are corrupt or are behaving in a way contrary to genuine national security?

Without a defence, any public interest-related revelations by intelligence and security personnel are considered criminal breaches.

Parliamentary groups like the Intelligence Select Committee, the Foreign Affairs Committee and inquiries such as the 2016 Chilcot Inquiry into the Iraq war reveal only so much, months and years after the events took place. In some cases they are not given access to important information that would enable them to better complete their inquiry, or ministers refuse to answer questions or even to attend.

Over the last two decades, no official or government minister has been held to account for illegal invasions, illegal surveillance, illegal rendition and torture, illegal drone strikes.

It is obvious that for a country to thrive democratically, its public and parliamentarians need to be well-informed and have transparent access to information. In countries where information is heavily classified and restricted, such as the UK, the onus is on investigative journalists, dogged reporters and their sources. But when journalism and whistle-blowers are also under attack, one is forced to ask, what does the government wish to hide?

Until and unless there is a dramatic improvement in the accountability and transparency of the actions of the UK intelligence services and other government bodies, the need for public interest whistle-blowing will only increase. And in a genuine democracy, whistle-blowing, which can be argued to be in the public or national interest, should be properly and legally protected. DM