From Wikispooks
Jump to navigation Jump to search
"He became a scalp that we treasured." – Ralph Harris on Brian Walden [1]

Brian Alastair Walden (born 8 July 1932) is a former Labour Party MP who later became the long time presenter of the Sunday current affairs programme Weekend World. He was close to a number of atlanticist and anti-communist networks.

Walden was born in West Bromwich on July 8, 1932. He won a major open scholarship to study at Queen's College, Oxford and in 1957 was elected President of the Oxford Union. He completed a postgraduate course at Nuffield College, Oxford, before becoming a University Lecturer.

At the 1964 UK general election, Walden was elected Member of Parliament for Birmingham All Saints, later Birmingham Ladywood, in an election where race dominated the Birmingham campaign (see Patrick Gordon Walker). He was re-elected in the subsequent General Elections of 1966, 1970 and 1974 (February and October). He was a campaigner for the liberalisation of the cannabis and gambling laws, even named by some as "the bookies' MP" when he was revealed to be receiving more from the National Association of Bookmakers than his parliamentary salary.

On 16 June 1977, Brian Walden became Steward of the Chiltern Hundreds, resigning from the House of Commons to become a journalist and broadcaster. He has presented various television programmes, mostly for London Weekend Television, such as Weekend World, 'The Walden Interview' and 'Walden', and was a member of the board of Central Television between 1981 and 1984.

Links to the Institute of Economic Affairs

Ralph Harris, long time chairman of the Institute of Economic Affairs, recalled that during the mid-1970s Walden attended lunches at the right-wing think-tank. Harris told the author and journalist Andy Beckett:

[Brian Walden] came on condition it would be private. He told us, "[The Labour Leader Harold] Wilson is a fraud and a cheat. I shall deny it completely if you go public. I'll pursue you and even sue you." Fascinating chap. Spoke with a strange accent. He became a scalp that we treasured. Later, he would often have our chaps on his television programmes. [2]

Links to US cold warriors

In the Spring 1987 issue of the Washington-based journal The Public Interest, subtitled 'Britain on the Brink', Walden wrote:

The Anglo-American relationship and the future of NATO depend upon the result of the next British general election. This is not a battle between Republicans and Democrats, with a different emphasis here and a slight change of direction there. American political parties are broadly in agreement upon the economic system and about defense [sic] policy. In Britain today, the political struggle is about the very nature of society itself.

The value of the Social Democrats is that if no single party has a majority in the next House of Commons, they can be relied upon to prevent Britain from being unilaterally disarmed. Almost certainly the Liberal party will follow this lead, if not from conviction, then as a matter of electoral expediency.

Walden's views are interesting not only because in the 1980s he was close to the powerful on both sides of the Atlantic. Before he became a fellow Birmingham MP with Roy Jenkins, Walden had been very active in the Campaign for Democratic Socialism, the anti-unilateralist Gaitskellite vehicle run by Bill Rodgers. Until his retirement from Parliament in 1977, Walden had been part of that pro-nuclear, pro-NATO, pro-American wing of the party which found its voice within the Labour movement through Socialist Commentary and, more widely, through Encounter magazine, one of the wide range of Central Intelligence Agency-funded activities fronted by the Congress for Cultural Freedom from the early days of the Cold War. [3]

Walden was well-known for his one to one interviews of major politicians, especially Margaret Thatcher. He was said to be her favourite interviewer, although he would give her a tough ride, and she revealed in her autobiography that Walden had been a speechwriter for her. In November 1989, Thatcher gave Walden a famous interview when her own Party was turning against her.

Brian Walden: You come over as being someone who one of your backbenchers said is slightly off her trolley, authoritarian, domineering, refusing to listen to anybody else – why? Why cannot you publicly project what you have just told me is your private character?

Margaret Thatcher: Brian, if anyone’s coming over as domineering in this interview, it’s you. It’s you. [4]

Brian Walden continues to broadcast. In March 2005, he began presenting a ten minute programme on Fridays, called A Point of View, on BBC Radio 4, in a spot formerly occupied by Alistair Cooke's Letter From America. He lived in Guernsey and campaigned against a ban on fox-hunting. 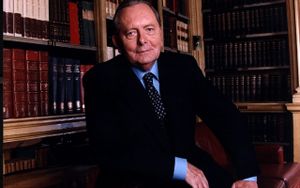