The so-called Ballets roses (English:'Pink ballets') was a France/VIPaedophile expose that hit the headlines in France in 1959. It involved several prominent personalities including André Le Troquer, who had participated in sex parties with adolescent girls.

The affair began with the publication in the daily newspaper Le Monde dated January 10, 1959, of a brief story about the placing under arrest warrant, a few weeks earlier, of a so-called policeman accused of kidnapping minors.[1]

On January 23, the political weekly paper Aux écoutes du monde expanded the information with an note "La petite folie du Butard": the police officer allegedly admitted to having organized exclusive parties with prominent personalities and minors in various places in the Paris region, including in the hunting lodge the Butard pavilion in the gardens of the Versailles palace. This hunting lodge located near Paris, in the forest of Fausses-Reposes, was at the time made available to the President of the National Assembly, André Le Troquer.[2]

At the age of seventy-three, Le Troquer had taken part in bacchanals with his painter mistress, but especially with adolescent girls aged fourteen to twenty. On the program of collective festivities, like libertine dinners of the Regency: striptease sessions, naked posing, pleasures of the senses embellished with whipping, sensual choreographies. Festivities took place in the studio of the mistress, but also at the Palais-Bourbon, at the Opera or at the Pavillon du Butard, the secondary residence of the President of the Assembly. In these libertine evenings, Le Troquer embellished his old age in the presence of a cohort of young women, five of whom were minors. Of these five, four had been brought by a young man [Pierre Sorlut]. Le Troquer said of this young man that he was a boy who had good bearing, who seemed to be from a good family, who was likeable[3] 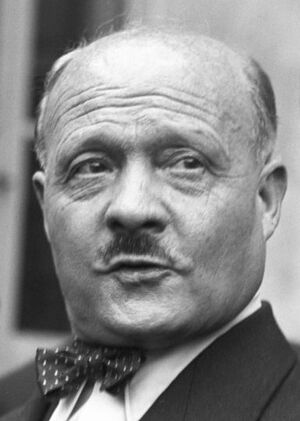 A letter addressed publicly to the editor of the weekly by the politician André Le Troquer to protest to the “published allegations an unreserved, categorical, absolute denial” gave a new dimension to this news item.[2]

Indeed, André Le Troquer, 74, was a prominent figure in political life. Mutilated in the First World War where he had lost an arm, he was notably[4]:

He was quickly charged, along with a dozen elderly and wealthy men; managers of shops in upper class neighborhoods or chic restaurants, a hairdresser on avenue Matignon, two police officers, etc[5][6], members of the “tout pourri” to use the expression of Le Canard enchaîné[7]. Facts

The investigation established that Pierre Sorlut, who pretended to be a policeman (he was on call), had trapped young girls for three years (the youngest would have been 14 years old and the oldest 20 years old). according to some sources[2], 12 and 18 years old according to others [8][9], whereas the civil majority at the time was 21 years old and the sexual majority was 15 years old) by offering them to meet men who promised, through their connections, to promote their artistic career. Supplied with alcohol and marijuana, they performed amateur erotic shows for an audience, some of the choreographies of which were created by Elisabeth Pinajeff, known as "the countess of Pinajeff", a Romanian painter and false countess, ex-actress, then companion of André Le Troquer (hence the name of the affair, "Ballets roses"). Persuaded to promote the careers of their daughters, some mothers were consenting.[1]

Sorlut had previously been the driver to the boss of the intelligence service Direction de la surveillance du territoire the Gaullist Roger Wybot.

As for André Le Troquer , the court did not hold it against him, either for having claimed it was a political machination intended to smear him, or for having hosted these exclusive parties in a palace owned by the state: taking into account a "long past of services rendered” and not wanting to “overwhelm an old man”, it only imposed a one-year suspended prison sentence on him and a fine of 3,000 francs[2]. These convictions and sentences were confirmed in March 1961 by the 10th chamber of the Paris Court of Appeal.

After his release, Pierre Sorlut, the organizer of these pink ballets, opened a restaurant with his wife Suzanne (married in prison), Les Cornouailles , located at 97, rue des Martyrs in Paris. In 1965, his restaurant was robbed and vandalized[11].

Its impact was mitigated by other news, whether politically, the Algerian war, or, judicially, the Lacaze affair.

René Coty's great-grandson, Benoît Duteurtre , deals with this affair in his book Ballets roses, published in 2009. During the program "Affaires sensible" presented by Fabrice Drouelle on France Inter "L'affaire des Ballets roses" [12], in 2015, Benoît Duteurtre assures that his book is more about André Le Troquer. Relating to a time when the offense of pedophilia did not yet exist as such, it shows how justice minimized the abuse of minors. The president of the court goes so far as to chastise young girls who are no longer children, accusing a decadent society and "the spirit of Saint-Germain-des-Prés". Duteurtre himself is not unaware of the responsibility of parents who hoped for a social elevation of their offspring, accepting, for example, places at the Opera. His research did not allow him to find any of the young girls, but he describes at length his meeting with Pierre Sorlut, the one who seduced young girls before inviting them to parties where they were made to consume alcohol before amusing the elderly. men. Sorlut subsequently ran a libertine club.

This page imported content from Wikipedia on 04.04.2022.
Wikipedia is not affiliated with Wikispooks.   Original page source here
Retrieved from "https://wikispooks.com/w/index.php?title=Ballets_roses&oldid=244157"
Categories: