"Adriana Ross, a former model from Poland who allegedly helped organize Epstein’s predatory sessions, moved to Florida in 2002 and was hired to work at his mansion. Ross, who often went by Adriana Mucinska and is not directly named in Monday’s indictment, also frequently flew on Epstein’s private jet alongside Bill Clinton, according to flight records.

Along with her fellow alleged co-conspirators, Ross was questioned in 2010 about whether Britain’s Prince Andrew participated in Epstein’s alleged sex enterprise. Refusing to answer questions about the inner workings of the alleged scheme, Ross repeatedly invoked her Fifth Amendment rights, according to previous reports. As previously reported by The Daily Beast, Ross also lived at the East 66th Street building in Manhattan."[2] [3]

Adriana Ross was one of four named "potential co-conspirators" granted immunity by the 2007 sweatheart plea deal that Alexander Acosta cut Jeffrey Epstein. [4] The others were Sarah Kellen, Lesley Groff and Nadia Marcinkova.[5][6] 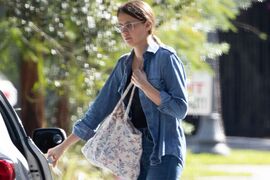 Ross' location was unknown as of August 2019[5] but The Mirror reported that she was living in Florida.<ref>https://www.mirror.co.uk/news/uk-news/former-model-