On the morning of April 12, 2022, a mass shooting occurred on a northbound N train on the New York City Subway in Sunset Park, Brooklyn, New York, United States. The alleged shooter left behind his credit cards for fast and easy identification. Out of 10 000 surveillance cameras on NY subways, the only three not working were at this station.

At approximately 8:24 a.m. EDT, a man later identified as 62-year-old black nationalist, Frank Robert James put on a gas mask, threw two smoke grenades, and fired a handgun 33 times. The shooting occurred as the train was traveling between the 59th Street and 36th Street stations.[1]

Twenty-nine people were injured, ten of them from direct gunfire; the remaining injuries were from smoke inhalation. Most passengers disembarked at 36th Street, where some passengers fled onto an R train that traveled one additional stop to 25th Street. On the day after the attack, James was arrested as the suspect after a large manhunt. James was charged by the U.S. Attorney's Office for the Eastern District of New York with committing a terrorist act on a mass transit system.

On the same day, New York Lt. Gov. Brian Benjamin was arrested in a federal corruption investigation. Benjamin, a Democrat, was accused in an indictment of participating in a scheme to obtain campaign contributions from a real estate developer in exchange for Benjamin’s agreement to use his influence as a state senator to get a $50,000 grant of state funds for a nonprofit organization the developer controlled.[2]. Benjamin later resigned.[3] 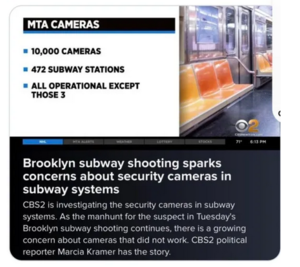 Mark Crispin Miller made a partial list of items which point to the likelihood of the subway attacks being a staged affair[4]: