A recurrent part of the media manipulation during the COVID-19 deep event was claims that morgues were overflowing, necessitating the use of refrigerated morgue trucks to store bodies, creating dramatic images.

In April 2020, as the intensity of the pandemic continued to worsen and the rising COVID-19 death toll overwhelmed funeral homes, officials had to send refrigerated trucks to hold corpses.[1] Over the next months, similar stories continued from around the United States[2][3][4] and the world.[5][6]

The real reason for bodies piling up was less dramatic. Normally, when someone dies at the hospital, the body is taken to the hospital morgue, and it sits there until the family contacts the funeral parlor and makes arrangements to have it picked up. Typically, this happens fairly quickly. Hospital morgues have been designed for this routine turnaround.[7]

Bodies that would normally have been picked up by funeral parlors were not picked up due to new quarantine rules, including requirements for personal protection outfits and closed coffin funerals, that made the work of undertakers immensely time consuming and caused huge delays.[8]

In July 2020, The mayor of Phoenix, Arizona, Kate Gallego (Democrats) - and a World Economic Forum Young Global Leader - claimed that Abrazo Health, one of the major health care providers in the city, has been forced to order refrigerated trucks because its hospitals have exhausted their morgue capacity. “It is very scary out here. I wish we had given mayors the authority to act earlier.”[9] 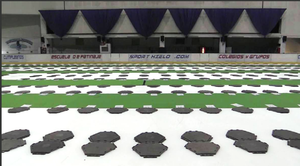 The ice rink in Madrid

In March 2020, CNN reported of an ice rink in Madrid, Spain, was turned into a temporary morgue. Bodies of people who have died of Covid-19 are now being transported by the country's emergency military unit to the Palacio de Hielo, or Ice Palace.[8]

However, the real reason for the pileup was made clear in the same CNN article. The Madrid municipal funeral service, a major provider in the city, announced in a statement it would stop collecting the bodies of Covid-19 victims, because its workers don’t have sufficient protective material. [8]