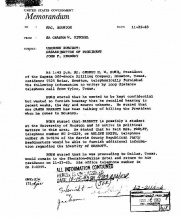 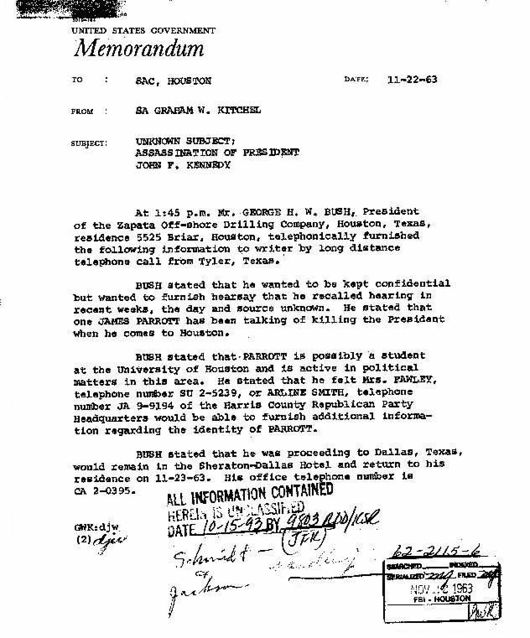 On August 25, 1988, the San Francisco Examiner published a story (based on an FBI memo) which began "A man who identified himself as George H. W. Bush phoned the FBI in Houston a few hours after President John F. Kennedy’s assassination in Dallas to report that a right-wing Young Republican had “been talking of killing the president,” FBI documents show." The full memo was later disclosed, although as Russ Baker notes, corporate media did not show any interest in it:[1]

BUSH stated that he wanted to be kept confidential but wanted to furnish hearsay that he recalled hearing in recent weeks, the day and source unknown. He stated that one JAMES PARROTT has been talking of killing the president when he comes to Houston.

BUSH stated that PARROTT is possibly a student at the University of Houston and is active in political matters in this area. He stated that he felt MRS FAWLEY, telephone number SU 2-5239, or ARLENE SMITH, telephone number JA 9-9194 of the Harris County Republican Headquarters would be able to furnish additional information regarding the identity of PARROTT.

BUSH stated that he was proceeding to Dallas, Texas, would remain in the Sheraton-Dallas Hotel and return to his residence on 11-23-63. His office telephone Number is CA 2-0395.