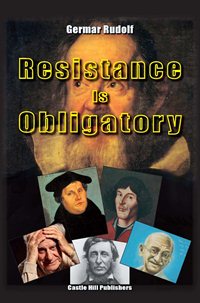 This is a pdf file of the full published book ISBN 9781591480303. It is available on Wikispooks with the express permission of the author who would appreciate donations from people who download it. The printed edition is available from Castle Hill Publishers

To anyone unfamiliar with the so called 'anti-hate' laws of Germany and who believes that, the Federal Republic remains a champion of personal freedom, the experiences of Germar Rudolf represent a salutory lesson. Rudolf's ordeal began in the early 1990's when, with an advanced chemistry degree already under his belt, he was in the final stages of his doctoral application at the Max Plank Institute in Stuttgart, Germany. As evidence for the defence in a Federal court case and on an expenses-only basis, he agreed to prepare an expert report on the chemical residues of a building claimed to be one of the homicidal gas chambers at Auschwitz concentration camp - nothing more. Without Rudolf's knowledge or permission, the defendent in the case, Otto Ernst Remner, later added an introduction and afterword to the report and published it. Publication set in motion a legal process, the implications of which quickly became clear to Rudolf who fled the country before a 14 month prison sentence was imposed on him in absentia. This initiated a bizarre chain of events which, 10 years later, culminated in his deportation from the US back to Germany where he was immediately imprisoned and charged with further offences for his publishing activities whilst abroad.

German law effectively forbade Rudolf from submitting any evidence to the Mannheim Court as to the truth of his 'criminal' utterances - under pain of further identical charges. Catch-22! Rudolf's defence was confined to the statement which makes up the bulk of this book, and which took 7 days to deliver. It is supplemented by previously published expert reports, letters and eminent academics' statements from ealier court proceedings in support of Rudolf's defence, none of which were deemed admissible evidence.

In a truly Kafkaesque trial he was sentenced to a further 2½ years imprisonment. In total Rudolf served the full 40 months sentence with no remission. He was released on 5 July 2009.

Such is the state of freedom of speech in one of the West's leading democracies.

★ Start a Discussion about this document
Resistance is Obligatory

He who argues that peaceful dissidents on historical issues should be deprived of their civil rights for their diverging views, that is: incarcerated, is – if given the power to implement his intentions – nothing else but a tyrant (if enacting laws to support his oppressive deeds) or a terrorist (if acting outside the law).

Imagine that you are a scientist who has summarized the results of fifteen years of research in a book – and that shortly after publishing this book you are arrested and thrown into prison exactly for this. Imagine further that you are aware with incontrovertible certainty that in the scheduled trial you and your defense attorneys will be forbidden, under threat of prosecution, to prove any factual claims made in that book; that all other motions to introduce supporting evidence will be rejected as well; that all the courts up to the highest appellate will support such conduct; that only a very few of your research colleagues will dare to confirm the legitimacy and quality of your book because they fear similar persecution; but that the efforts of these few colleagues will be in vain as well; and finally that the news media, the so-called “guardians of freedom of speech,” will join the prosecution in demanding your merciless punishment. In such a situation as this, how would you “defend” yourself in court?

This is precisely the Kafkaesque situation in which I found myself at the end of 2005 after having been abruptly and violently separated from my wife and child by U.S. Immigration authorities in Chicago, deported to Germany and immediately thrown into jail to await trial, primarily on account of my book Lectures on the Holocaust, which I had published in the summer of 2005. Various defense attorneys, who had acquired renown in similar cases in the preceding 15 years, unanimously assured me of what I already knew after having observed similar trials during the past 15 years: that all defense was doomed in principle and that I would have to reckon with a prison sentence close to the maximum term (five years). Other attorneys who until then had not handled such cases either declined to take my case because they did not want to waste their time or my money in view of the complete hopelessness of all defense. Or else they advised me to recant my political views during the public main proceedings of the trial, feign remorse and contrition, and promise to improve my behavior in the future, which might gain me the clemency of the Court, and in the most favorable case I might come out with a sentence of three years.

To renounce my scientific convictions was not an acceptable option, however, if for no other reason than because I could not believe that any judge, who is expected to have at least an average intelligence, would accept and believe such a thing after I had been a full-time publisher of dissident historical and political literature for fifteen years. In fact, it seemed more likely that I would be punished even more for such transparent lies and hypocrisy, and if only by way of a negative character evaluation by the Court in considering the grounds for the verdict. Even if the rest of the verdict were wrong, the Court would be correct in this point, and I did not want to do that to myself.

A defense based on the facts of the case was not only hopeless, but would have exacerbated my situation, because in defending myself I would repeat once more the very crime of violating state dogma for which I was now facing the Court. But I am opposed to such self-destructive strategy anyway, because I am firmly convinced that no penal court has the right to pass binding judgment on matters of scientific controversy. It is therefore an impermissible concession to allow a court of law to pass judgment on the correctness of scientific theses – here about history – in the first place. Every such motion to introduce evidence is already a crime against science, since it undermines the independence of science.

Thus I decided quite early to treat the upcoming trial as an opportunity to document the Kafkaesque legal conditions now prevailing in the Federal Republic of Germany in order to write a book about it after the trial was over. For this reason I wanted to make a thorough statement about the governing legal situation at the beginning of the main proceedings. After a biographical introduction, I would explain the actual nature of science as such and its significance for human society. This would be followed by a depiction of the Kafkaesque situation prevailing in German court trials today, whose mission is to suppress opinions that are a thorn in the side of the power elite. After analyzing today’s practice, which violates all our human and constitutional rights, I wanted to pose the explosive question of the extent to which we as citizens of this State have the right and even the duty to resist such injustice.

Needless to say that, when planning such a presentation to a German court of law from a bare prison cell, one encounters two major obstacles: The first of these was access to the special literature required to prepare such a lecture, which is not available from the poorly equipped prison library. The second obstacle is the uncertainty of whether the Presiding Judge will even allow such detailed presentations in his courtroom. Formally the Presiding Judge cannot restrict the defendant’s presentation; but if German judges observed our formally guaranteed rights, there would be no show trials to begin with, would there? Both of these problems were solved, though. The first one by the generous assistance of various supporters who, in the year preceding the trial, supplied me with all the books I needed for my preparation, and the second one by a Presiding Judge who made no attempt to impede me from presenting anything I wanted to say – who in fact has even been friendly enough to provide me with a lectern so that I could stand while presenting my case.

My seven days of lectures on the destruction of freedom of opinion in Germany were strenuous not just for me but apart from the judges certainly also for the audience. However, I have prepared these lectures not primarily for these listeners, but rather for posterity and the whole world: for you, dear reader.

At the end these lectures might have contributed decisively to my not getting the prophesized maximum sentence but “merely” half of it. Although deep down in the back of my mind I might even have hoped for it, it certainly wasn’t a foregone conclusion. In order for this to occur I needed judges who, despite social conditioning and societal expectation, still had the capacity to think rationally and who would allow fairness and mercy to prevail at least to a limited extent. I obviously was fortunate in the composition of the panel of judges in Mannheim District Court who sat in judgment of me at the end of 2006 and in early 2007.