The 2016 Hurriyah car bombing hoax was a real bomb in the Hurriyah area of Baghdad. It was reported as having killed people by commercially-controlled media, but a CCTV recording that was later released showed that it killed no one, although people quickly arrived to behave as victims. 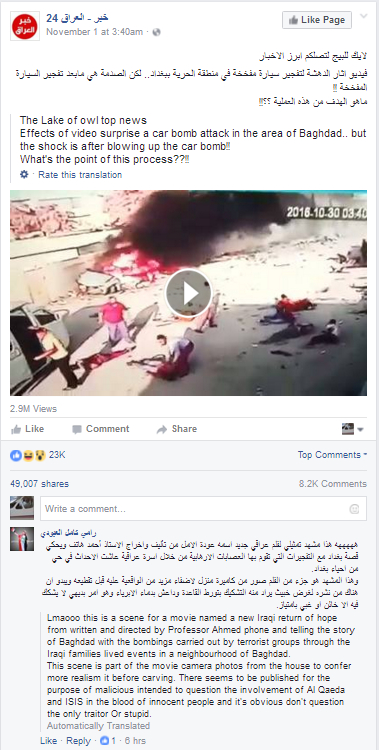 On 30 October 2016, Reuters[1] published a report of a car bomb in that killed "at least 8 people and wounded more than 30 others", which was picked up by the New York Times[2] and other outlets. The New York Times report that "Iraqi police say a parked car bomb has exploded in Baghdad's northwestern neighborhood of Hurriyah, killing at least 10 and wounding 34."[3]

The Daily Mail reported on the 31st October 2016, that "a parked car bomb — hit a popular fruit and vegetable market near a school in the northwestern Hurriyah area, killing at least 10 people and wounding 34. IS claimed responsibility for the attack".[4]

The next evening a video was published which appears to be a hand held camera recording of CCTV footage of a bomb. This shows a man walking away from an empty, wrecked car and getting into a white truck, which drives away. A few seconds later the bomb explodes, and a few seconds later about a dozen men run to the scene and lay on the road apparently pretending to have been victims of the car bomb. A van then arrives, men get out and carry the "victims" into the it, as if they had been injured by the blast.

Bellingcat reported on it on 4 November, after the video was released.[5]

The New York Times had removed their reporting of the incident by 11 December 2017.[6]