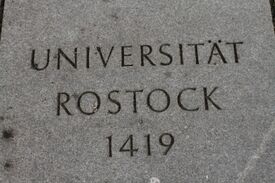 Memorial stone to the foundation of Rostock University, quadrangle of Wittenberg University

The University of Rostock (Universität Rostock) is a public university located in Rostock, Mecklenburg-Vorpommern, Germany. Founded in 1419, it is the third-oldest university in Germany. It is the oldest and largest university in continental northern Europe and the Baltic Sea area, and 8th oldest in Central Europe.[1] It was the 5th university established in the Holy Roman Empire.

The university has been associated with five Nobel laureates. Famous alumni include Nobel laureates: Albrecht Kossel, Karl von Frisch, and Otto Stern; theoretical physicists: Pascual Jordan and Walter H. Schottky. It is a member of the European University Association. The language of instruction is usually German and English for some postgraduate studies.

In the vicinity of the university, institutes, start-ups and established companies have created clusters of business and research in the areas of high technology. Especially in the sectors of biotechnology, medicine and life sciences (e.g. BioCon Valley and DZNE), nanotechnology, light research and photonics, agricultural and environmental sciences, in maritime research (IOW) as well as in research into areas of data processing and the information society ( IGD), important companies have settled here. Demographic research in the area around the university is also world-class, especially with the responsible Max Planck Institute. 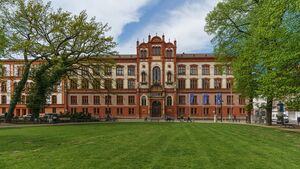 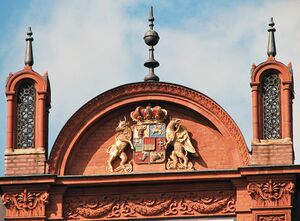 It was founded in 1419 by confirmation of Pope Martin V and thus is one of the oldest universities in Northern Europe.

In (Germany), there are only five universities that were founded before, while only Heidelberg and Leipzig operated continuously since then: Heidelberg (1386), Cologne (1388), Erfurt (1392/1994), Würzburg (1402/1582) and Leipzig (1409). That makes Rostock University the third oldest German university in continuous operation.

Throughout the 15th century, the University of Rostock had about 400 to 500 students each year, a large number at that time. Rostock was among the largest universities in (Germany) at the time and many of its students also came from the Low Countries, Scandinavia or other states bordering the Baltic Sea.

In the course of political struggles and pressure from the church, the university moved to Greifswald in 1437 and remained there until 1443. From 1487 to 1488 teaching took place in Lübeck.

A few years later the city of Rostock, its university also became Protestant in 1542. Humanism and Lutheranism were defining characteristics of the university. After the Thirty Years' War (1618–1648), the University of Rostock played only a regional role. When the "ownership" of the university moved from the city to the state (Grand Duchy of Mecklenburg-Schwerin) in 1827, however, things changed for the better. The end of the 19th century saw generous building activity in Rostock's alma mater and the university soon regained its old reputation amongst German universities.

On the occasion of the 500th anniversary of the university, Albert Einstein and Max Planck received honorary doctorates on 12 November 1919. This made the University of Rostock the world's first institute of higher learning to award this honour to Einstein. The doctorate was not revoked during the Nazi rule in Germany (1933–1945), despite such orders by the Nazis. The reason for this remains unknown. Psychologist David Katz and professor of dentistry and dean of the medical faculty Template:Interlanguage link multi lost their posts in 1933 among others.

The end of the Second World War in 1945 brought many changes. The university, now finding itself in the Soviet Zone of Germany (the later German Democratic Republic), was re-opened on 24 February 1946. The Faculty of Law was closed in 1951, a Faculty of Agriculture was introduced in 1950 and in 1951 saw the opening of a Department of Shipbuilding (renamed Faculty of Technology in 1963). The University of Rostock was the first traditional university in Germany to open a technical faculty. In 1952, the Faculty of Aviation was opened, but eventually relocated to Dresden.

In 1976 the university was renamed Wilhelm-Pieck-Universität after Wilhelm Pieck, the first president of the German Democratic Republic. The renaming was annulled after the German reunification.

The regional economy has improved as over 800 companies launched from the university since 1991. External funding for research increased between 2005 and 2010 by 83% and currently is above 47 million Euros per year. Over 500 million Euros has been invested in the university infrastructure since 1991, which will reach 750 million Euros by 2015. The number of young people from the West Germany and international students who choose University of Rostock as a study location, are increasing every year. International Students from 99 different countries have been studied at University of Rostock. In 2007, the University of Rostock gathered its research capacities into three profile lines: Life, Light & Matter (LLM), Maritime Systems, and Aging of Individuals and Society. In 2010 a fourth was added, called Knowledge-Culture-Transformation. Life, Light & Matter develops new concepts for future technologies based on atomic and molecular processes in connection with laser optics and life sciences. Maritime Systems unites oceanographers, engineers, humanities scholars, agricultural and social scientists, economists and lawyers. Aging of Individuals and Society has as its target a self-determined lifestyle in old age. Knowledge-Culture-Transformation deals with media and the representation of knowledge, transformation of knowledge, knowledge and interculturalism as well as knowledge and power.

In nearly six centuries numerous notable students and professors have had ties with the university, for instance: 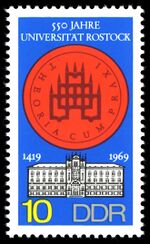