From Wikispooks
(Redirected from SSC)
Jump to navigation Jump to search 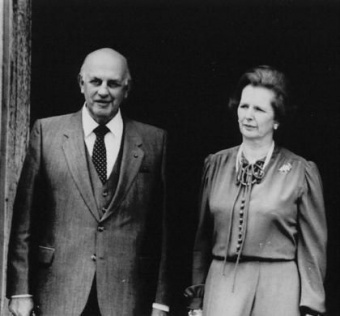 The South African State Security Council (SSC) was established in 1972 as a permanent cabinet committee with an advisory role on intelligence matters. Under P W Botha, who came to power in 1978, the SSC assumed a policy making role as levels of anti-apartheid activity reached huge proportions. Convening directly before each meeting of the cabinet, the SSC often took decisions which were then simply rubber-stamped by cabinet.

President P W Botha himself chaired the SSC, which was served by a secretariat of 100 full-time staff seconded from other government departments. The SSC had four divisions:

The operational arm of the SSC was the secret National Security Management System (NSMS), established in 1979, a network of regional and local bodies that coordinated the actions of the South African Defence Force, the police (SAP) and civil defence units. The SAP was given responsibility for counter-insurgency in South Africa and Swaziland, and the SADF for incursions into the rest of southern Africa. Certain residential areas where there was a high incidence of anti-apartheid violence were then specifically targeted by this combined security force.

In 1989 the new president F W de Klerk abolished the NSMS and the cabinet regained its direct control of national security. In 1997 and 1998 the Truth and Reconciliation Commission (TRC) gained access to the minutes of the SSC and was able to expose the full ramifications of its activities.[1]

Below the SSC was a network of regional, district and local committees or Joint Management Committees (JMCs) which reported on the activities and location of political activists so as to form an overall security profile, thus enabling decisions on security action to be taken.[2] Such action included assassination of people opposed to the apartheid government's policies, and the widespread use of abduction, arson, sabotage and torture. The SSC put pressure on the security forces to "engage robustly" against persons and organisations opposed to the government.[3]

The creation of a 'third force' was first raised at the State Security Council on 4 November 1985, when the Working Committee of the SSC, together with the Security Forces, was tasked to investigate "the possibility of a third force, parallel to the SADF and the SAP". It was envisaged that such a 'third force' would avoid the danger of politicising the police or the army; would allow the police to concentrate on their primary (crime-related) task; would allow the army to deal with civil war-type insurrection and insurgency in line with its traditional defence function, and would create a force with appropriate training and equipment for such work.

At the SSC meeting of 12 May 1986, where the proposals were tabled, the minutes note that the chairperson (P W Botha) said that the security forces must work together on the establishment of a 'third force'; that such a force must have a developed capacity to "effectively root out terrorists"; that it must be willing to be unpopular, even feared, and that the subversives must be dealt with using their own methods.[4]

In a 1998 report on the former South African government and its security forces, the Truth and Reconciliation Commission (TRC) castigated South Africa's last hardline apartheid president P W Botha and held him responsible for gross human rights violations, including all violence sanctioned by the State Security Council. The report said:[5]

In 1996, the TRC conducted a special investigation into the 1986 aircrash in which president Samora Machel of Mozambique was killed. The investigation was unable to prove an allegation that South Africa was behind the Mozambican Tupolev Tu-134 air disaster, but the TRC stated in its report:[6]

In a statement on the death of former president P W Botha in 2006, his successor, F W de Klerk, said:[7]

In August 2007, de Klerk was challenged to say what he knew about the atrocities carried out at the behest of the SSC. The Guardian quoted de Klerk as replying that although he was a member of the cabinet it was not briefed "on clandestine operations involving murders, assassinations or the like – all of which were evidently carried out strictly on a 'need to know' basis".[8] The same newspaper report alleged that, in his last months as president in 1994, de Klerk ordered the wholesale shredding and incineration of tons of documents, microfilm and computer tapes that dealt with matters such as the chain of command in covert operations.

This page imported content from Wikipedia on 16 April 2013.
Wikipedia is not affiliated with Wikispooks.   Original page source here
Retrieved from "https://wikispooks.com/w/index.php?title=State_Security_Council&oldid=90383"
Categories: