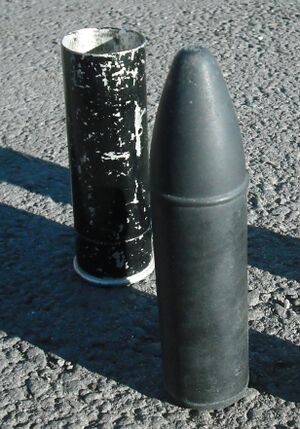 Rubber bullets (also called rubber baton rounds) are a type of Baton round.[1] Despite the name, rubber bullets typically have either a metal core with a rubber coating, or are a homogeneous admixture with rubber being a minority component. They are a less lethal alternative to metal projectiles, but can still cause serious injuries such as blindness, permanent disability, and death.[2][3]

Like other similar projectiles made from plastic, wax, and wood, rubber bullets may be used for short range practice and animal control, but are most commonly associated with use in riot control and to disperse protests.[4][5][6]

Rubber bullets were invented by the British Ministry of Defence for use against rioters in Northern Ireland during The Troubles,[7] and were first used there in 1970.[8]

Rubber projectiles have largely been replaced by other materials, as rubber tends to bounce uncontrollably.[9]

Analysis of the composition of the "rubber" pellets used by Chilean police shows that 80% of the pellets is made up of hard substances, chiefly silica and barium sulfate, while rubber makes up 20%. The measured hardness of the "rubber" pellets is 96.5 shore A.[10] The hardness of the pellets explain why "exploded eyes" are so common in the 2019–2020 Chilean protests.[11] 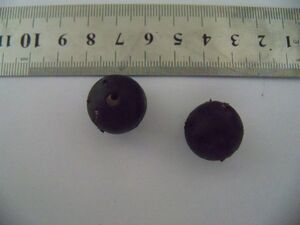 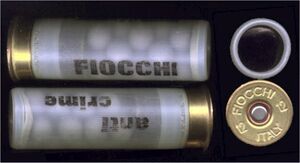 The British developed rubber rounds—the "Round, Anti-Riot, 1.5in Baton"—in 1970 for use against people in Northern Ireland.[12][13] A low power propelling charge gave them a muzzle velocity of about 60 m/s (200 ft/s) and maximum range of about 100 m (110 yd)."The round is generally deployed in low trajectories or skip fired in the general direction (non-target specific) of the intended targets," causing pain but not injury, but is also intended to be direct fired at the discretion of the operator.[14][15][16] From 1970 to 1975, about 55,000 rubber bullets were fired by the British Army in Northern Ireland. Often they were fired directly at people from close range, which resulted in three people being killed and many more being badly injured. Among these injuries, a notable victim was Emma Groves who was blinded in one incident. In 1975, they were replaced by plastic bullets. In Northern Ireland over 35 years (1970–2005), about 125,000 rubber and plastic bullets were fired—an average of ten per day—causing 17 deaths.[17]

The baton round was made available to British police forces outside Northern Ireland from 2001. In 2013 however, Ministry of Defence papers declassified from 1977 revealed it was aware rubber bullets were more dangerous than was publicly disclosed. The documents contained legal advice for the MoD to seek a settlement over a child who had been blinded in 1972, rather than go to court which would expose problems with the bullets and make it harder to fight future related cases. The papers stated that further tests would reveal serious problems with the bullets, including that they were tested "in a shorter time than was ideal", that they "could be lethal" and that they "could and did cause serious injuries".[18]

Israeli rubber bullets are produced in two main types. The older type, the standard rubber bullet, is a steel sphere coated in a thin layer of rubber, weighing 14 grams, while the newly improved rubber bullet, introduced in 1989, is a rubber-coated metal cylinder 1.7 cm in diameter, weighing 15.4 grams.[19] Of the lethal injuries from this projectile, most are suffered to the head.

In some countries, less-lethal guns that fire rubber projectiles may be used by civilians for self-defense.

Rubber bullets, powered only by primer, are usually used for short-range indoor target practice or training, generally with handguns. They are intended only for target shooting, unlike paintballs or airsoft pellets, which are intended for use on suitably protected live targets. Rubber bullets, if used with a suitable backstop, can be recovered undamaged after firing, and reused many times.[21]